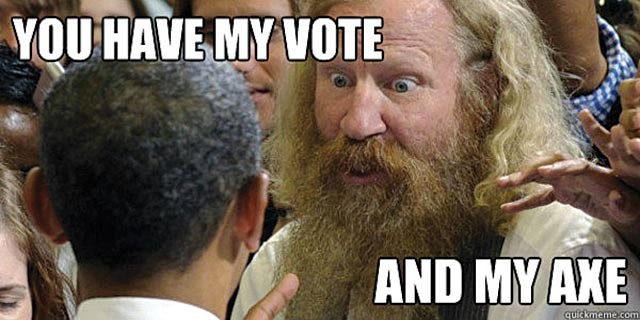 “Our state leaders should be elected by the greatest number of people. How can you argue that having fewer people participate in the political process is good for the state?”

The more, the merrier

A funny thing happened on the way to November. Well, it wasn’t necessarily funny – we could laugh, but we’re stuck with Gov. Rick Scott, Attorney General Pam Bondi and the rest of the dirty kitchen cabinet (sink?) for four years. You might recall that Orange County voters were asked to register their feelings on making local elections partisan (because they are), thereby moving the elections of wonderful lovers of transparency like Orange County Mayor Teresa Jacobs to presidential years. More of a fair competition, you say? Voters said no! By about 55 percent, your friends and neighbors said that this wasn’t a good idea, because partisanship is awful.

“But we think party labels would inject an unwelcome, Washington-style partisanship into the commission,” the Orlando Sentinel editorial board said just before the election. “Under Florida’s closed-primary system, labels also would disenfranchise independent voters – the fastest-growing sector of the state’s electorate – during primary elections. And the mayor’s race arguably would get less attention from voters if it is competing with the presidential race. We recommend no.”

Aw, boo. Well, never ones to let themselves look like sore losers (even when they often lose), Democrats came out last week with their angry faces and declared that the midterm situation in Florida isn’t really fair; people aren’t that likely to show up.

“More Floridians deserve to have their voice heard,” Kevin Cate, adviser to gubernatorial hairdryer Charlie Crist said in a blog, according to the Tampa Bay Times. In other words, the midterm elections are broken.

“What’s wrong with it?” Thrasher said to the Times. “I think our voters have gotten used to it the way it is and they like it that way.”

OK, do they like it that way? Do they enjoy showing up in off years at libraries and churches in order to take part in the horse-race gamble of small-town (or -state) egos, or is it more a situation wherein they have no choice, are pushed into hubris, don’t care anymore and just want to give up on local government?

(To be fair: Democrats probably shouldn’t run shape-shifting Republicans at the top of the ballot anymore, but still.) However, it turns out that in the partisan language of side-swiped-hair people in sharp suits, Democrats probably created their own problem. The history goes something like this, according to the Times:

“A band of rural, upstate Democrats known as the ‘pork choppers’ still controlled the Legislature then, and in a special statewide election in 1963, voters changed the Constitution and moved elections for governor to even-numbered years that are ‘not a multiple of four,’ starting in 1966. From 1964 to 1966, Democrat Haydon Burns held a two-year term as governor to start the new midterm calendar. Voting in Florida has since followed a boom-and-bust cycle: Millions more people vote in presidential years than in midterm elections for governor and the three statewide Cabinet offices,” the paper reports.

And though that may be true (it is), the notion that Democrats are incapable of winning elections in the off-season is a bit disturbing. Also, can we please talk about the fact that Dixiecrats are not Democrats anymore?

Given the still-pending discussions of gerrymandering in the state’s redistricting trial and the apparent malaise of the state’s voters (thanks, Miami-Dade County), there may be room for a mirror in this conversation. Also, is the reset switch really going to help progressive causes? Not likely, say most.

“The Republican Party will run an effective campaign to make sure it doesn’t,” State Sen. Jeff Clemens, D-Lake Worth, told the Times. “It also drains resources from other Democratic causes.”