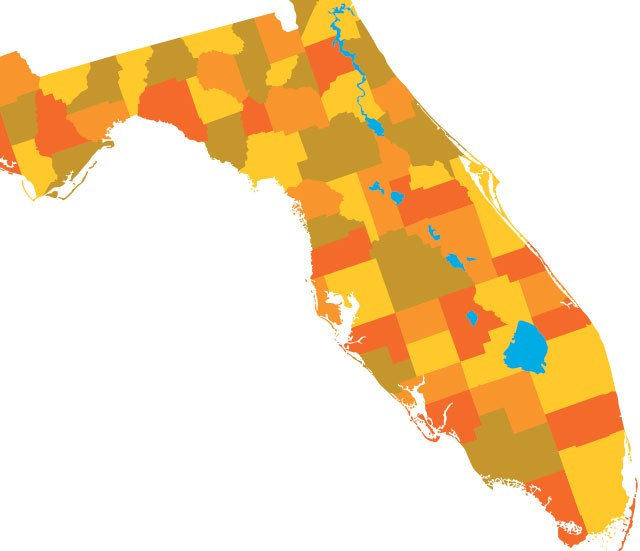 ESTIMATED RATE OF GROWTH IN FLORIDA POPULATION BETWEEN 2010 AND 2012; NEW YORK’S POPULATION GREW BY JUST 1 PERCENT

“EVERY NUMBER WE SEE, IF WE DON’T PASS [NEW YORK] THIS YEAR, WE’RE GOING TO PASS THEM IN THE NEXT FEW MONTHS. FLORIDA IS ON A ROLL.”
– GOV. RICK SCOTT
SOURCE: NEW YORK TIMES

You guys, Floridians are becoming an epidemic. According to a report in the New York Times, we are just one log flume full of water moccasins released from the back of an RV (that also happens to be carrying semi-automatic rifles and a scented Stand Your Ground defense package) away from overtaking the Big Apple on the census list of places where people willingly reside. What the?

Well, at least according to the Times, the figures – which apparently aren’t that surprising to those of us who don’t still live in this fresh hell of strip-mall strip clubs – “underscore immigration trends,” which makes sense, especially when you consider that California and Texas are
battling it out for Nos. 1 and 2, while we struggle against New York in the lower reaches of the top four. Also, although New York City continues its vertical ascent to being the only place that anybody really cares about, the rest of the state “has lost large-scale manufacturing jobs and large chunks of population.” Did you hear that? Population now comes in chunks.

Anyway, demographic junkies aside (because apparently demographic junkies – or chunkies – exist), the real story behind the census shuffle is that, as Florida’s population grows, so does its political influence in Washington, D.C. To wit, New York lost two representative seats after the 2010 Census, while Florida picked two seats up. The lunatics, as they say, are taking over the asylum.

The worst part is that, despite Florida Gov. Rick Scott’s vacant-stared appreciation of peninsular pre-eminence, the shift will also have an effect on the rationing of federal funds for all manner of programs – transportation, public housing, health care. Wait, we’ve already refused $51 billion in federal money for Medicaid expansion, so that’s basically a waste and a wash. In fact, the Times reports, there’s plenty of medicine to go with the demographic sugar Gov. Scott seems to be swilling at the moment. Even though Scott went out of his way to sweeten pots and steal industries over the past year with that whole “you can get away with highway robbery or at least employee abuse without taxes here” thing, most indicators still find Florida way at the bottom in terms of spending on quality-of-life issues like education. Also, the more people you have, the bigger the drag on resources like hospitals and parks and interstates. That’s not enough to shut Scott up, though.

“When I call on companies around the country, I clearly talk to them about what the weather’s like,” Scott told the Times. “I say, ‘Oh, it’s 40-what?,’ and I joke, ‘I’ve got to turn down the air conditioning so you can hear me.’”

Oh, look! It’s good-natured gubernatorial ribbing about finance and air conditioning! New York Gov. Andrew Cuomo isn’t taking any of this lying down, except, of course, when he’s lying down in a down comforter. “Florida and the South have a warmer climate if that’s what you prefer,” he told the paper. “I prefer to have seasons.” Blech.