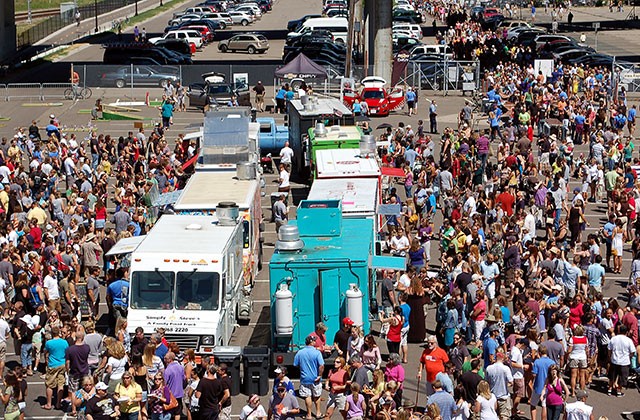 There’s a food fight brewing over the city of Orlando’s food trucks.

On one side, there’s the city, which recently passed a “temporary use permit” pilot program that regulates how food trucks do business in the city. City officials say they had no idea just how popular food trucks would be in Orlando until the city was suddenly brimming with them. Over the past couple of years, the trucks have become a staple in the city’s food scene, appearing regularly outside popular neighborhood bars and at special events like Tasty Tuesdays in the Milk District and TheDailyCity.com’s Food Truck Bazaar. Until recently, the trucks operated fairly unhindered in Orlando, as long as they didn’t violate existing city regulations. The new pilot program, put together with the help of a food truck “roundtable” made up of food truck operators, neighborhood leaders and local restaurateurs, spells out where local food trucks can do business, how often they can sell food at various locations what permits they need to be legal.

On the other side, there are food truck operators themselves. Some of them have remained quiet about the new regulations, but others say the new rules are unfair and threaten their businesses.

“These new rules and regulations, this changes everything for my current business model,” says Al Ruiz, operator of the Fish Out of Water sushi truck, which has built a lot of its business partnering with local bars, such as the Falcon in Thornton Park and BART in Mills 50, that will let the truck park in their lots and serve patrons. The food truck pilot program says that private businesses can only host the food trucks one night per week. “We’ve chosen to work with the best craft beer and wine bars, and for two years, this model has done great for us and our community. The new pilot program basically could knock me back to working six days a month, as opposed to the six days a week I’m currently working. It’s simply unfair.”

Food truck operators like Ruiz have banded loosely together to convince the city to change the pilot program, which is designed to be in place for two years. During that time, says city spokeswoman Cassandra Lafser, the city may tweak the rules. “This is a pilot program,” she says, “so by the very nature of it being enacted, we’re always listening to stakeholders about their suggestions for future changes and considering enacting those into the pilot.”

And the stakeholders – at least some of them – do have suggestions. A local lobbyist, Dan Pollock, who says he’s got a lot of friends in the local food truck community and therefore a vested interest in how this food fight turns out, has lent worried food truck operators his expertise. He started a Facebook page called Food Trucks for Fairness, which says it’s a place for food truck operators, supporters and local businesses to network on the subject. He says the group is hoping to reopen discussion with the city about inherent unfairnesses in the new program. For instance, the temporary use permit prohibits food trucks from using Styrofoam packaging – though not an onerous rule in and of itself, Pollock points out that local restaurants are not prohibited from doing so. Food trucks will also be required to provide recycling containers for customers and to empty municipal trash cans that exist within 25 feet of their trucks.

Because Pollock isn’t a food truck owner, some say this isn’t his fight and that it’s a small but vocal minority of food truck operators who are blowing the potential impact of the new rules out of proportion. In fact, some of the rules encoded in the program were already in place before. It’s just that the trucks weren’t always abiding by them. For instance, city law has always made it illegal to serve people curbside, on sidewalks or in other rights-of-way. The pilot program explicitly tells food trucks they can’t do so. Lafser points out that if the trucks were doing it before, they shouldn’t have been. The pilot program, she says, clarifies things for the trucks and should make it easier for trucks to do business here.

But so far, the new rules have already resulted in what some are calling the first “casualty” of the food truck scene. Last week, the Falcon Bar and Gallery in Thornton Park announced that it would no longer host food trucks outside the bar because the business’ landlord is concerned about the pilot program, which states that any truck doing business on private property must first obtain a notarized letter from the property owner. No letter, no food truck.

Fish Out of Water’s Al Ruiz says this is a direct hit to his truck, which used to be at the Falcon every Thursday night.

“I am truly heartbroken over losing this venue to serve at,” he says. “We worked very hard for two years building a grass-roots following and a great relationship with not only the owners of the Falcon, but their staff as well as some adjacent businesses. … [I] am hoping that the people of Orlando won’t lay down on this subject, as it will affect everyone in some sort of way. I just want to work with my friends in the community. Working in a mall parking lot as being my only option just isn’t fair.”