Former President Bush calls right-wing extremists 'children of the same foul spirit' as Afghan militants. But he built the party where it flourishes 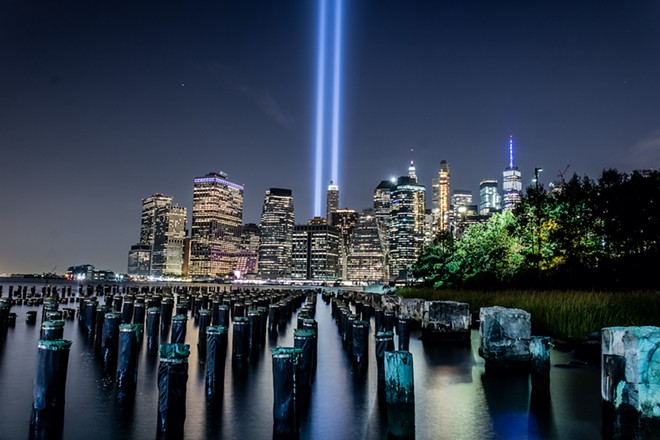 I’d worked late finishing an investigation into a cabal of developers who were effectively dictating a local government’s land-use decisions. As I groggily pulled into my newspaper’s parking lot that morning, only a few phone calls stood between me and one of the biggest scoops of my nascent career. Another reporter met me at the front door.

“Someone blew up the World Trade Center!”

Everyone old enough to have experienced 9/11 has their own version of a 9/11 story.

I remember trying to beat back anxiety while polishing copy that no longer seemed relevant and making last-minute phone calls that would never be returned.

I remember refreshing slow-loading news sites searching for updates — How many were dead? How many more attacks were coming? — and taking long smoke breaks on the second-story fire escape, staring at what passed for Orlando’s skyline and imagining what it would look like if a 747 slammed into the 416-foot-tall county courthouse, then the tallest building downtown.

I remember thinking that the U.S. would soon bomb someone back to the Stone Age — and I was mostly OK with that, which unnerved me.

I knew in my bones that this was an epochal moment, no less than the collapse of the Berlin Wall, JFK’s assassination, or Pearl Harbor. But I was too young to fully appreciate what that meant and too naive to consider its context or implications for the future.

Hunter F. Thompson got it right away: “The towers are gone now, reduced to bloody rubble, along with all hopes for Peace in Our Time, in the United States or any other country,” he wrote on Sept. 12 for ESPN. “Make no mistake about it: We are At War now — with somebody — and we will stay At War with that mysterious Enemy for the rest of our lives.”

To his point, several soldiers who died during the last throes of that war, as the United States abandoned Afghanistan to the same totalitarian regime it had dislodged two decades earlier, were in diapers when the towers fell.

It’s hard to describe the collective mood that followed 9/11; it was like watching 300 million people join a cult. We were told that to fight the “war on terror” — like you can fight a tactic — the nation must stand “united.” In reality, the unity that commentators recall with rose-colored glasses meant performative patriotism, obsequious media and suppressed dissent.

Flags were ubiquitous. Jack Bauer tortured people on television. Toby Keith sang about putting “a boot in your ass” because “it’s the American way.” Rudy Giuliani became a national hero.

More importantly, George W. Bush, who owed his presidency to hanging chads, claimed a 90% approval rating, which meant that Congress approved the Patriot Act without a second glance. And when the Bush administration beat the Iraq war drums, the media cheered. Those who questioned the neocons were condemned as unpatriotic. When France refused to aid Bush’s invasion, House cafeterias began serving “freedom fries.”

It all proved disastrous. The Bush administration’s excesses and failures were laid bare in his second term: the lies about Iraq’s WMD, Hurricane Katrina, Abu Ghraib, the economic collapse. He slunk out of office less popular than bad sushi.

The “mysterious Enemy” remained, though it’s become abstruse, encompassing crises throughout the Middle East. You can never defeat “terrorism.” The threat will always linger. There will never be Peace in Our Time.

We soon found another Enemy to fight, too: ourselves. Over the last two decades, our forced unity has fractured into deeply (though asymmetrically) polarized factions, one of which is actively undermining our democracy. I don’t know whether 9/11 served as a catalyst for this state of affairs or whether it was inevitable.

The country was already diversifying by 9/11, and the Republican Party had begun marching to the far-right years earlier, during Newt Gingrich’s tenure as House Speaker. And there’s no doubt that the financial collapse, the election of a Black president, and the rise of social media played a considerable role in the radicalization of the GOP.

But the with-us-or-against-us post-9/11 atavism played well on talk radio and Fox News — which, after Bush’s crash-and-burn, concluded that he wasn’t conservative enough. Chief among his sins was trying to broker an immigration deal with Democrats.

After the election of Barack Obama — unlikely without the Iraq War — the Tea Party delivered to Republicans the House in 2010, the Senate in 2014, and became Donald Trump’s core of support two years after that. Its libertarian rhetoric thinly masked the racial resentment at the heart of its appeal; its adherents saw the conflict as existential.

Their way of life was threatened. Nothing was off-limits. They refused to compromise. They shattered democratic norms. And they embraced Trump’s demagogic populism. He embraced them back. Trump’s remade GOP scorned the Bush version. His was working-class, resentful of elites and prone to conspiracies that flourished on social media: birtherism, QAnon, COVID vaccines and especially election fraud.

Nine months after a mob stormed the Capitol and more than half of congressional Republicans voted to overturn an election, three in five Republicans say supporting Trump’s lies is central to being a Republican.

The party has become something very unlike what it was before the towers fell, as its former leader noted during Saturday’s commemorations. Bush likened right-wing extremists to the militants he’d sent Americans to fight in Afghanistan: “They are children of the same foul spirit, and it is our continuing duty to confront them. … So much of our politics has become a naked appeal to anger, fear and resentment.”

As tempting as it is to applaud Bush for calling out his own party — or a faction within his party — I can’t help but wonder whether he’s trying to put out his own fire.

Get more Informed Dissent at billman.substack.com.