Four months after Pulse, Orlando finds joy amid the sorrow

Surreal. That's how it still feels, 115 days after the worst morning in Orlando. There were gunshots, screams, running, pickup trucks at the hospital. First 20 dead, then 49 dead. Gasps, more screams, bullet casings, 49 names coming in one by one. Our city called the site of the worst mass shooting in modern U.S. history. Blood bank lines, national media trucks, white crosses, politicians, Anderson Cooper. Love is love is love is love. Tears, candles, vigils and rainbows everywhere. 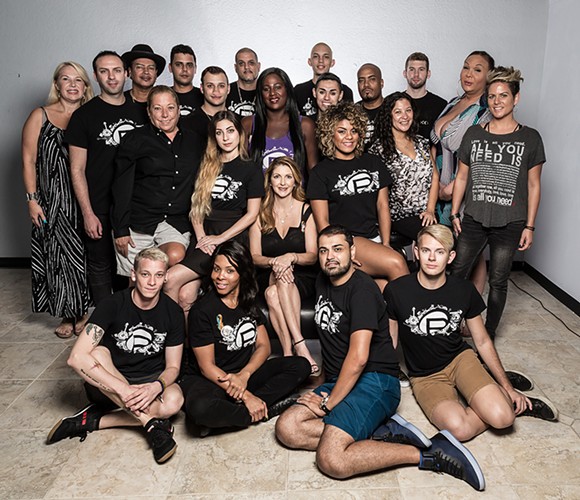 Almost four months after a gunman walked into the gay nightclub Pulse in Orlando on Latin Night and started a massacre that ended with 49 people dead and countless others injured, the City Beautiful is healing, molding itself into a different place than it was before June 12. And in spite of the ache, the LGBTQ+ community and its allies are ready to turn out in numbers – an estimated 150,000 – at the Come Out With Pride Orlando parade Saturday, Oct. 8. For some, it might be hard to find joy amid the continued sorrow, but for Pulse employees and leaders of the local LGBTQ+ community that Orlando Weekly talked to, the Pride parade is an opportunity to keep honoring the legacy of those we lost, remember the struggle, celebrate our differences, and in the words of our local LGBT publication Watermark, say, "You cannot silence us. You cannot destroy us. We are not going anywhere."

For Watermark editor-in-chief Billy Manes, Pride is as much celebration as it is protest, which can be a difficult balancing act.

"It's not easy to mitigate tragedy with celebration," he says. "But in a strange way, this might be the strongest and most important Pride Orlando has ever seen. The world threw Pride for us all summer, and now it's our turn."

Manes, alumnus of Orlando Weekly, was one of the first voices in Orlando to communicate to the national media the sentiments of the local LGBTQ community. Since then, he's helped launch the Pride Fund to End Gun Violence, a political action committee that focuses on electing pro-LGBTQ candidates who will promote gun reform, such as banning military-style weapons and limiting high-capacity magazines. Manes says Pride Fund and Gays Against Guns, an organization that advocates for stricter gun control, will be at the parade this weekend.

"I wrote a piece, a monologue of how I felt the other day, and it was effectively 'Fuck guns,'" he says. "It still makes me angry."

Manes draws from his own experiences. His partner, Alan Jordan, committed suicide with a gun in 2012, and his death was followed by an extended legal ordeal. He acutely understands the trauma that comes from losing a loved one to gun violence and says he understands people who are still mourning and can't find it in themselves to celebrate Pride. For Manes, it's a moment to take a stand, not only for the 49 victims killed at Pulse, but for the 33,000 Americans who die from gun violence every year and for the continuing struggle for equal rights in the LGBTQ community.

"I wish I could say it's all rainbows and roses, everything is better and we've pulled ourselves back together," he says. "But you can still get called 'faggot' when you walk down the street, and we have a record number of murders of transgender people. It certainly has brought us more allies, and it's a good year to have motivated allies for things like LGBT workplace rights and gun reform. Pulse made people in Orlando, for whatever rare time, have to pay attention."

Barbara Poma says it's still hard to process what happened, but she finds herself glowing when she sees her Pulse employees together. Poma, one of the owners of the gay nightclub, tries to meet regularly with the familial group, though it has been hard to find a meeting space now that the club itself is off-limits.

"We are happier when we're together," she says. "You see a lot of smiles those days, even from me. As far as coping and healing, we are all still at different stages with that and some of us still need to get help. We're all just in different spaces."

Poma opened the club in honor of her brother, John, who died of AIDS in 1991. The name "Pulse" is a reference to her brother's heartbeat and the way he continued to inspire his family and friends. Since the tragedy on June 12, Poma has indicated that she wishes to create a memorial at the site. Some of her employees had to find other jobs to supplement their income or apply for help with the OnePulse Foundation.

Poma says she and her employees, whom she calls her family, have a range of emotions about the Pride parade.

"We're excited to be together, we're excited to celebrate life, and that's how we're choosing to look at this," she says. "It's a celebration of those who survived and a celebration of those who passed on. We honor them and their families that day. But it is hard to be excited, and we're definitely in a different place this year. We're going to focus on being advocates for love, acceptance and equal rights for the LGBTQ community."

A group of about 25 Pulse employees agreed with Poma, saying they were looking forward to Pride and to seeing the rest of the community come out to support them.

Angelica Sanchez, an entertainer at Pulse, says there's more of a reason this year to attend Pride. With everything that's going on in the world, it can sometimes feel like Pulse is being forgotten.

"I think it's present for the gay community, but there's so much that's going on these days that sometimes, it gets lost for everybody else," she says. "Thank God people are still thinking about us and praying for us and helping us where they can."

Moving forward, the majority of the group agrees they want to see gun laws changed.

"This should never happen again," Sanchez says. "I believe everybody still has the right to bear arms. The Second Amendment is what it is, but it needs to be updated. At the same time, there's no need for someone to come in the place with that type of assault rifle. That's just not right."

Poma says she plans to open a new Pulse and wants to bring her family together on a more regular basis instead of meeting at restaurants. She hopes corporate sponsors who came on board for Pride this year will continue to join and that the festival will grow.

"Pride has grown tremendously, not just in the size of the floats but in the size of the crowd," she says. "We've watched how Orlando has become a more accepting place to live, and to be gay, and to be whoever you identify as. What happened here should never be forgotten, and I hope next year we'll have a bigger crowd and continue on our journey."