Orlando sometimes seems endlessly colorless, timeless and placeless, with fragments of other cities replicated in theme parks, or public art that is too often a pale copy of something another city did first. This month, Orlando is vividly present and accounted for, with three exhibits at the Cornell Fine Arts Museum and another at Snap! Orlando encompassing centuries of African and African-American identity in art and culture. No suite of images and artifacts could be more timely, as we prepare to hold hands in increasing unity and mutual support. Comparing all of these shows in a grand sweep of viewing is a must. What's fascinating is the trajectory of cultural participation in the white world that all of these shows bring to life – an arc from an observed, exotic "other" to the creation of Afrotopias having nothing to do with whiteness.

We tagged along with Julian Chambliss, the history chair at Rollins College who's equally grounded in urban civics and in the taxonomy of superheroes, while he put the final touches on AfroFantastic, an exhibit he curated with Rollins students at CFAM. "Blacks in the public sphere have historically been part of a political agenda of some sort," Chambliss says, waving hello to a museum assistant. "It's interesting to try to separate black from blackness." Much art doesn't deal explicitly with race, even if the artist is a person of color, and since patronage of art museums is largely white, black artists find themselves creating, de facto, for the white gaze. Blackness is, therefore, often either hidden or self-conscious in the fine art space. 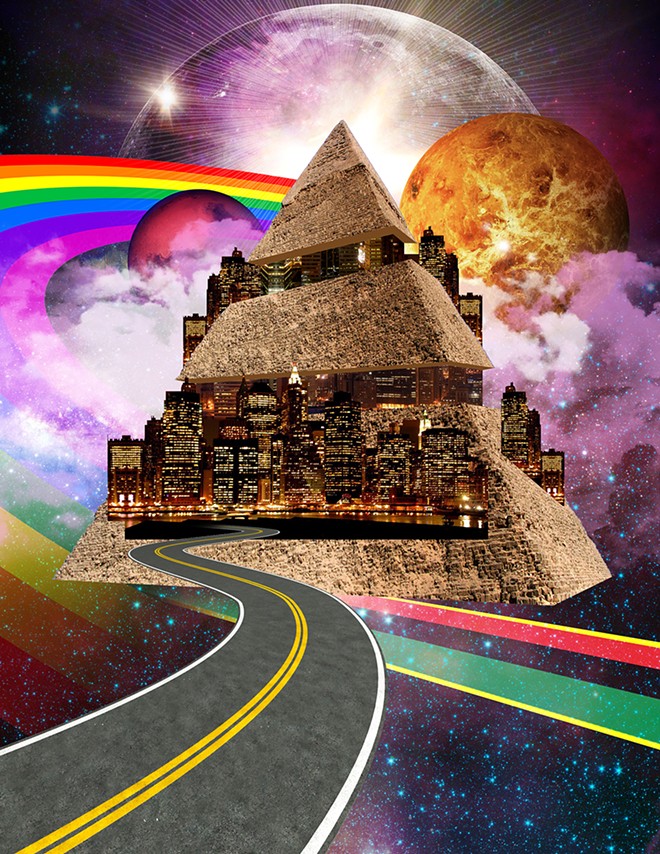 On the feature wall (you'll need to visit to see why it is a feature wall) is Abstract Expressionist Sam Gilliam's acrylic painting "Blue and Red (and Again)," a lyrical soak-stain of soft blue and red beauty. On another wall is a collection of Dawud Anyabwile's original drawings for his 1990s independent comic Brotherman, about growing up in Big City (any big city), the universal black urban experience writ small in his memories.

In one corner, a listening post allows us to hear Zora Neale Hurston's recordings from Every Tongue Got to Confess: Negro Folk Tales From the Gulf States, her seminal work of African-American traditional stories. In the center of the room, a series of books by black authors, including W.E.B. DuBois, show African-American contributions to literature – "Olin Library came through with a few first editions here!" Chambliss smiles.

A sharp, small sculpture protrudes from one wall: "Weapon of Freedom" by artist Melvin Edwards. At first glance it appears to be part of the David Smith/Robert Rauschenberg tradition of crumpled and welded metal, and it has a subtle solid/void space at once sophisticated yet primitive. But wait – there's a spot of red on it, suggesting blood, and then the dark title sinks in. This is what Chambliss means by separating black from blackness. "Weapon of Freedom" is a uniquely black addition to this otherwise white abstract sculptural tradition and a magnificent example of forcing the viewer to confront meaning in art.

Chambliss and his students wrote or selected all the explanatory texts for AfroFantastic. Outside one gallery is a text by Mark Dery, who coined the term "Afrofuturism" to refer to African-American concerns in the context of 20th-century technoculture. "I put that there so you can start processing the idea of black art, and how to fit the concept of race into abstract and figurative art," Chambliss says. The hero image of this exhibition, Stacey Robinson's "Afrotopia 1," alludes to this concept. Robinson writes that this collage of Egyptian pyramid power, rainbows and purple clouds, crystal balls and a road to outer space "is about building a Black world free from colonial influences. ... It's part of a body of work which imagines the unseen, imagined, protected utopia spaces that only exist through Black popular culture or critical thought. Safe spaces of community for like minds in sight of loved ones and protectors" like Martin Luther King's mountaintop, Prince's "Erotic City," or the breakdancer's "freeze" as an isolated and protected moment in time.

Chambliss' exhibit at CFAM coincides with The Black Figure in the European Imaginary, a collection of works mostly from Europe. European painters and sculptors seemed to see Africans as exotic jewels adorning royal courts, or as mysteriously free figures in "darkest equatorial Africa," or as sad allegories in chains. Black bodies seem to be opaque figures whether passive or in lively motion, until the viewer chances upon Henri Regnault's "Head of a Moor," painted in 1870, an upward-looking face animated with personality, zest and blazing pride.

Reframing the Picture, Reclaiming the Past, curated by Rollins art history professor Susan Libby and her students, ties together the themes of the other two shows, with contemporary takes on some of the othering and exoticism seen in Black Figure's historical works. On these walls we encounter Whitfield Lovell's 2004 "Patience," a young woman in 19th-century dress rendered in ghostly charcoal on old pine boards, almost effaced behind an antique radio. She's there and not there, behind the radio set, simply listening, a stance evocative of her status. 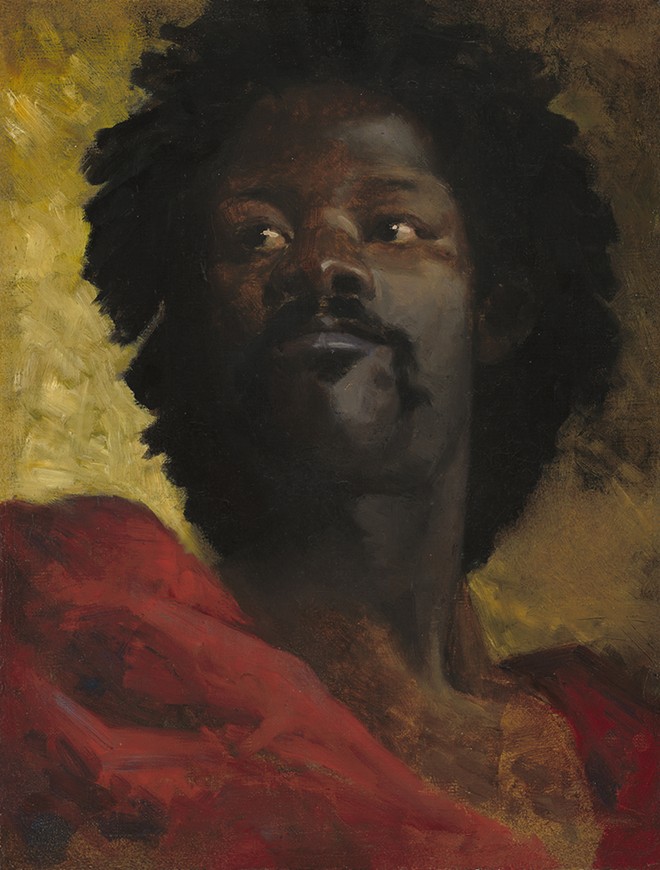 Hank Willis Thomas' photograph "The Cotton Bowl" is a biting depiction of the black male figure, showing a football player faced off against a sharecropper surrounded by cotton bolls, part of his series evocatively named Strange Fruit. Moving from Lovell's ethereal reference to servitude to this bitter satire is a hit of a stronger stuff.

"What is authentically black art?" Chambliss asks. "This was a concern of Hurston's that led to her leaving Harlem – she wanted the authentic black voice, not something groomed for the white audience. There is much of the authentic black voice in all of this work, and how to define a possible African future in the 21st century. All of these shows celebrate blackness in art, not just artists who are black."

Jumping to downtown Orlando, Snap spreads out with Posing Beauty, an exhibit big enough to fill both of its new spaces at 420 E. Church Street as well as its core gallery at 1013 E. Colonial Drive. In the three galleries on Church St., portraits of Denzel Washington, Lil' Kim, Michelle Obama and more give us glimpses of contemporary African-American success and what it means to experience that success in mainstream American culture. 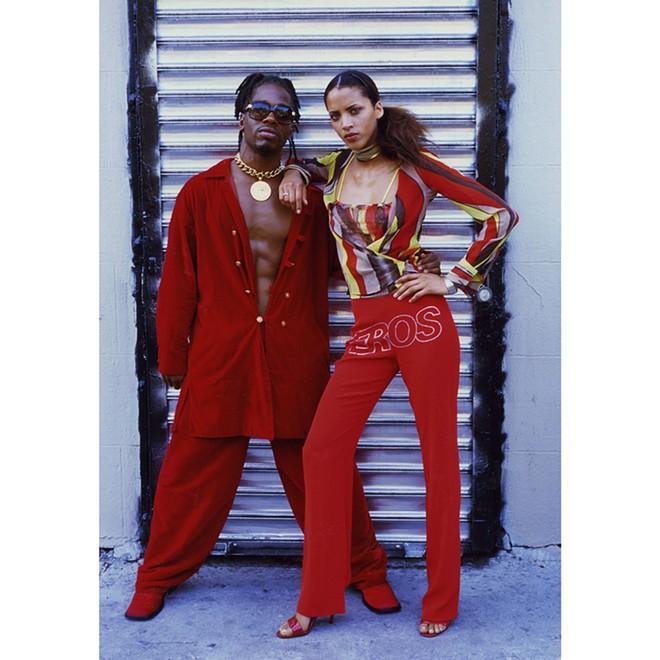 Deborah Willis, Ph.D., chair of the NYU Department of Photography, curated this traveling exhibit. She notes in her statement about the collection that there are "different attitudes about class, gender and aesthetics" on view here. African-Americans were kept out of the spotlight for a long time, existing on a parallel plane, developing an individual notion of what constitutes beauty. Entering the circle today, blacks bring a sense of beauty that enlarges the meaning of the word.

In Snap's Cameo Theater space on Colonial, photography buttresses empowerment. Edward Curtis' 1898 "A Desert Queen" depicts an elegant young woman in African headdress and necklace, posing loosely robed for the camera. Her gaze is serene and there is a maternal angle to her head. Her individuality is ascendant here, not a stereotype or a generalized "black person" but a person.

From there the show quickly zooms to the present. Hank Willis Thomas appears again in the show's namesake piece, "Posing Beauty," a collage of '60s-era swimsuit fashion shots, lampooning the way female bodies are objectified. Set in front of these stereotypical poses are three larger-scale portraits of African-American women defining beauty on their own terms. The contested space of the female figure is beautifully captured in this piece. It might make you ready for Sheila Pree Bright's Plastic Bodies series: Half plastic doll, half human, these dehumanized female bodies translate impossible standards of mainstream beauty into slavery of a different sort.

Posing Beauty as a whole is compelling, tracing the journey of visual representations of black bodies – first as passive subjects, and then as agents of their own individual expression. Willis' unerring curatorial eye captures the fascinating trajectory of this agency – what it means to be black, and the transformation of this meaning in American culture over the years.

At a time when the national media is corroded by negative racial messages, art – by transmitting images into the mind before you can blink – has the power to connect and unite. An image or two out of all these incredible exhibits here in Orlando will surely connect with viewers, and it's not so fantastic to imagine a new harmony, a transformative story, that isn't just white anymore.