Our favorite parks perfect for hiding out from the summer sun

by Lauren Ball and Kaleb Quast 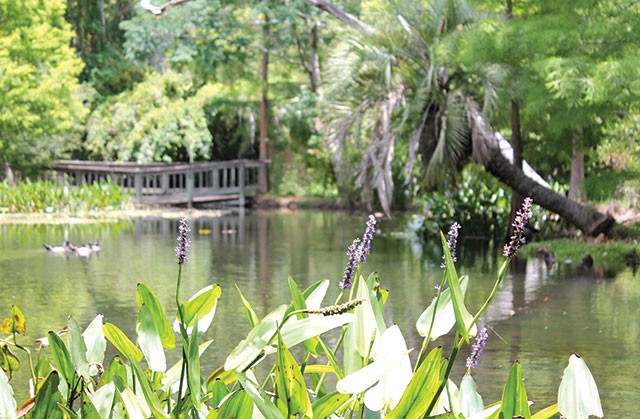 1. Dickson Azalea Park
100 Rosearden Drive
Hidden in plain sight, just off of East Robinson Street and North Ferncreek Avenue, Dickson Azalea Park is one of our city’s best-kept secrets. It seasonally boasts lots of pretty, blossom-covered trees and picturesque brooks beneath elegant – though admittedly decaying – bridges. However, it’s the mysterious forgotten quality of the grounds that we love. It’s the kind of place that you could imagine the rebellious kids from high school using as a refuge for day-drinking, but it also maintains a certain storybook innocence. The overgrown greenery encompasses the park in such a way that the surrounding neighborhood almost entirely disappears, lending the day over to the imagination in the cool shelter of the oaks. Escape the sweaty bustle of summertime in Orlando with a visit to this elusive, fairytale gem.

2. Mead Botanical Garden
1300 S. Denning Drive, Winter Park
You’d be hard-pressed to find a shadier park in the entirety of the greater Orlando area. Copious trees dot the meandering pathways and open lawns, barely leaving room for a few solitary sun specks through the heavy foliage. If you’re feeling particularly adventurous, explore the marshy trails that wind around the lake or the wild natural areas featuring native wetlands, uplands and creeks – a rarity in the middle of a densely populated area like this one, just off Highway 17-92 in Winter Park. If mosquitoes and mud-soaked shoes aren’t really your thing, take a peek inside the blooming Legacy Greenhouse before whiling away the day under the shelter of the leaves with a picnic and a good book.

3. Greenwood Urban Wetlands
1411 Greenwood St.
Tucked away behind the 408 and Mills Avenue is a sprawling oasis of cypress trees surrounding a sunken lake swimming in algae. The aptly named Urban Wetlands are a lush expanse of overhang that includes several bodies of water that flow into a cemetery. Take a walk on the shaded sidewalk and through the serene cemetery, look at the quaint houses lining the street or bring a blanket and plop down by the water’s edge – there are plenty of trees here to shelter you from sun or showers.

4. Cypress Grove Park
290 W. Holden Ave.
About a mile off the beaten trail, between Orange Blossom Trail and South Orange Avenue is another reprieve from Orlando’s heatstroke hell. Cypress Grove opens with an archway of trees that continues down the entire drive in. The tree cover is heavier on the side with the estate house and lake, but the green space is open, abundant and scattered with trees, leaving loads of room to spread out and ensure you won’t be rubbing elbows with any sweaty strangers.