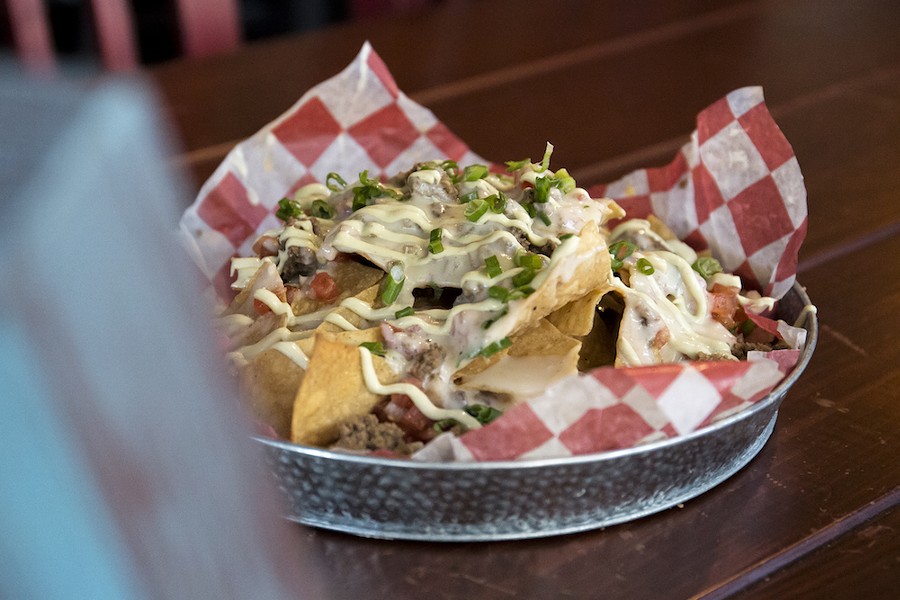 About a minute into getting our fingers messy eating a decent plate of nachos ($10) at Four Rebels American Taco Kitchen & Bar, it dawned on us that something was missing – jalapeños. So I got up and asked our lovely server if we could get some pickled or non-pickled slices on the side, but what was ultimately presented to us, however, was crushed red pepper flakes with a chaser of "We don't carry jalapeños."

No jalapeños? At a taco joint? Not sure if that's just a case of Four Rebels being rebellious or Four Rebels being, well, just plain American. Either way, get some jalapeños, you Four, and while you're at it, get a variety of chili peppers and make your own hot sauces and salsas. I know, I know, this is an "American Taco Kitchen," but if you can't stand the heat, get out of the taco kitchen – American or otherwise – I say.

The "Four Rebels," by the way, are the four owners on the front line of this "American Taco Revolution." They vow to "rebel against the ordinary" – and the elote street corn ($5) certainly wasn't ordinary. The cobs were wonderfully sweet and appeared to be boiled then grilled for a nice char. The corn came dressed for the occasion with avocado crema, queso fresco and, yep, that crushed red pepper.

Now, on to the tacos. We were told the tortillas were made in-house even though their look and texture said otherwise. The flour tortillas (a corn option isn't offered) have that manufactured feel and sheen of Mission brand tortillas. There's no charring and no organically coarse surface to these shells, but I suppose what sets these tacos apart are the fillings.

The cheesesteak Veracruz ($5) had a nice beefy flavor thanks to grilled ribeye; the addition of olives even gave it a picadillo-like zest. Then there's the Cuban sandwich-inspired "Mr. 305" ($5) with mojo pork, mustard aioli and fried pickle, which seemed a bit uninspired by Miami standards. But we quite enjoyed the fried green tomato ($3.50) taco – arguably our favorite – with fresh corn salsa, arugula and a red-pepper aioli. But those tortillas? Oof. In case you hadn't noticed, Mills Park pricing is applied to all tacos and, yes, that's one taco per order.

We also sampled the shrimp ceviche ($8) and the chorizo-mac ($5), a side highly touted by our server. I don't believe I've ever described shrimp like this before, but it was ... mealy. It crumbled in our mouths as we chewed it. Not good. (Maybe it wasn't shrimp we were eating but, rather, shrimp with a "K"?) The chorizo-mac, we're pretty sure, had bits of hot dog in it, not chorizo – neither the rich Spanish kind or the spicy Mexican variant.

Good thing, then, that there was a dessert by Se7en Bites offered – the peanut butter chocolate explosion ($6) was a palliating follow-up to that chorizo-mac – and plenty of drink to wash this food down with. The full bar and attractive rooftop patio should keep the cocktail crowd slaked, though we were one of just five people on this recent visit.

Look, there's plenty of other taquerias in the area – you can't swing a rolling pin without hitting one – and to draw the crowds in, a new one needs to show dedication to the craft of taco-making. A research trip to Taste of Yucatan, Taqueria Ameca Jalisco, Taqueria el Gordo, Hunger Street Tacos or Black Rooster Taqueria would do them good. Short of that, Four Rebels could soon get a visit from the Four Horsemen.