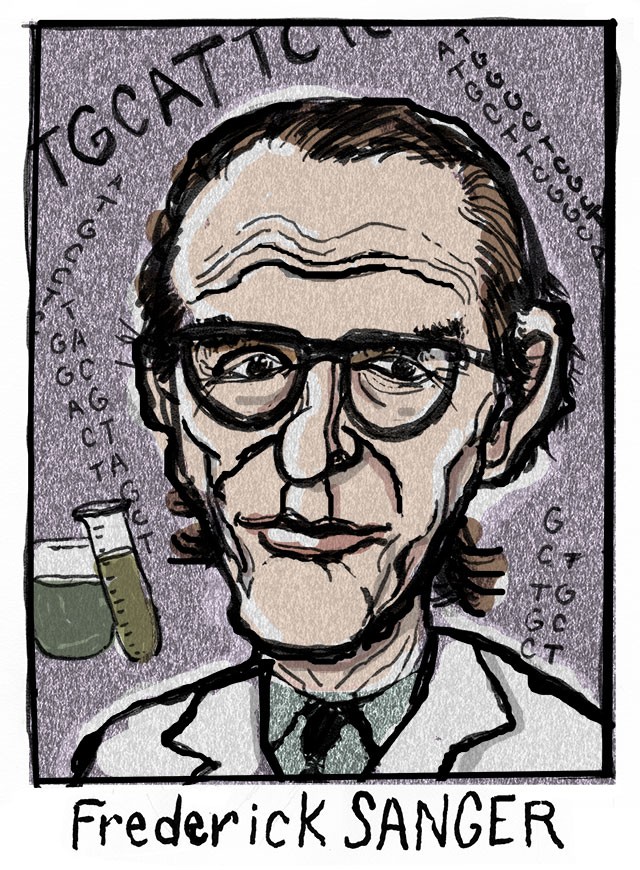 It’s easy to overlook the quiet ones. The ones who do their own thing and keep to themselves – unless, that is, that quiet one is Frederick Sanger, the distinguished biochemist whose dedication to the laboratory earned him two Nobel Prizes in chemistry. He is the only person to achieve such a feat in the field, and one of only four two-time Nobel laureates (the others: Marie Curie, for physics and chemistry; Linus Pauling, for chemistry and peace; and John Bardeen, twice for physics).

Sanger’s first prize was awarded in 1958 for his work on the structure of proteins, insulin in particular; he was recognized again in 1980 for determining the base sequences in nucleic acids. It was Sanger’s method of sequencing DNA that was digitized in 2003, allowing computer automation to lead scientists to crack the human genetic code. By that time, the Quaker-turned-agnostic Sanger had long since retired from the lab, devoting his time instead to gardening at his home just outside Cambridge, England. The notoriously soft-spoken scientist would have been knighted for his groundbreaking work, except he declined the honor because, he said, he objected to the notion of being called “sir.”

Sanger, whose father was a physician, recognized early in adulthood that his calling was in active research. He did not relegate his tasks to assistants, preferring instead to pursue problems single-mindedly and as an individual. It was via his findings that scientists have since made important connections between genetics and pharmacology – meaning drugs, therapies and treatments are now more effective for patients with genetic disorders due to Sanger’s work. For those suffering from hepatitis B and C, certain cancers, arthritis, bone fractures and other ailments, his work lengthened lives.

In the only autobiographical piece Sanger ever wrote, he explained his scientific approach modestly: “Of the three main activities involved in scientific research, thinking, talking and doing, I much prefer the last and am probably best at it,” he wrote. “I am all right at the thinking, but not much good at the talking.”

A humble man, whose obituary says that he claimed to be “academically not brilliant,” Sanger died in his sleep. It was a hushed exit for a hardworking man devoted to discovering truths, and never resting until he found proof.