by Seth Kubersky and Steve Schneider 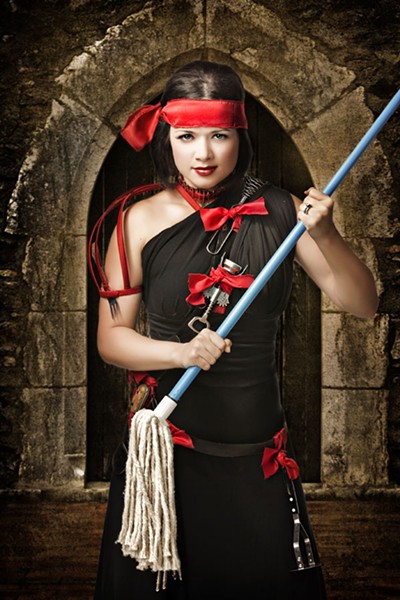 Bitches of the Kingdom

See Brian read the Fringe program! See Brian change the oil in Beth Marshall's car! Don't see Brian dance alone in the Goldman Theater! Brian Feldman's avant-garde performance pieces are always ambitious, but for this celebration of Orlando's 20th Fringe festival, he pulls out all the stops with 11 different experiments scattered throughout the Fest.

Any Title That Works

Kentucky-based comic Paul Strickland's debut monologue, "A Brighter Shade of Blue," was one of my favorite discoveries of last year's Fringe Fest. Hopefully his new one-man tale, a wry look at the people who influenced his personal development, will be equally as delightful.

A comedic drama about the "flights of fancy and down-to-earth peregrinations of a hardscrabble hobo," featuring live music from the Mudflappers? No clue quite what that means, but who cares: That's the kind of craziness Fringe was founded for!

This is our last chance to catch local stars Dewey Chaffee and Douglas McGeoch before they - and their breakout-hit characters Wayburn Sassy and Didi Panache - depart Orlando to take their act on tour. Fringe just won't be the same without a geriatric homophobe screaming "Screw you!" at us.

The GOAT group and Emotions Dance collaborated on this mashup of Milton's classic poem "Paradise Lost" with contemporary dance and comedy, all set to a soundtrack of Katy Perry and other pop tunes. With VarieTease taking the year off, this has potential to be the 4:20 show of 2011.

Bitches of the Kingdom

I was lucky enough to catch a workshop performance of this Disney-princess satire a year and a half ago in New York, and nothing that's happened in the interim has changed my mind that the Oops Guys have the best shot at a hometown-bred national breakout since Menopause the Musical. Only two questions hang over the show's Orlando debut: Will the local audience be wholly receptive to a musical sendup of iconography that gets shoved in their faces every day? And will the Oopsters' fervent fanbase respond to a program that features fully clad comediennes instead of wagging wee-wees or Asian gag machine Fiely Matias? In other words, here's our chance to prove we aren't complete assholes before this thing goes on the road for the next five years.

Well, this is a nice change of pace: an original Fringe show written by people who are famous outside the beer tent. Snagging a script co-penned by Mystery Science Theater 3000/RiffTrax stalwart Bill Corbett was quite the coup for the Clockwork Hobo production company, and while the play's overall concept - a screenwriter wrestles with a character he's literally brought to life - might not be enough on its own to get me out of bed before midnight, the presence of actors Philip Nolen and William Hagaman promises yuks aplenty. Plus, director Meghan Moroney is one funny broad herself, so I expect a good time indeed from this collaboration between her crew, Corbett and Minnesota Fringe veteran Joseph Scrimshaw.

Once upon a time, you could count on the Fringe to explore serious issues in a dramatic fashion. And if the local producing contingent has mostly abandoned that ground to obsess over the boundless comedic potential of the adolescent libido, we still have out-of-towners like Newfoundland's A Vagrant Theatre to keep us honest. Their Dying Hard examines the sad lot of Canadian miners in the 1960s, so I can't wait to revel in the sudden, suicidal dejection of everyone who bought a ticket expecting an hour of dick jokes.

My Friend in a Sketch Show

I've never regretted a dollar I threw at any show that featured the endearingly Hobbit-like Charles Frierman, and the teaser for this sketch program that he and his partners in the Minimalistic Theatre troupe performed at last month's Fringe Preview Pep Rally portended all manner of adept tomfoolery. That they spent their precious and few allotted minutes skating on the thin ice of ethnic slurs was brave indeed, but the comedic panache they showed in so doing quite honestly brought the house down. English translation: I'll have a whole lot of this Minimalism, please.

Editor's Note: The text of this review has been corrected.

Dog Powered Robot and the History of the Future

Only at the Fringe could last year's one-note outdoor gag become a full-fledged play. Can the concept sustain itself for 50 minutes? Oh, who cares? It's. A. Pomeranian. In. A. Robot. Suit. There's your 10 bucks right there.