From busking to Beyoncé, it's been quite a trip for brasshouse trio Too Many Zooz 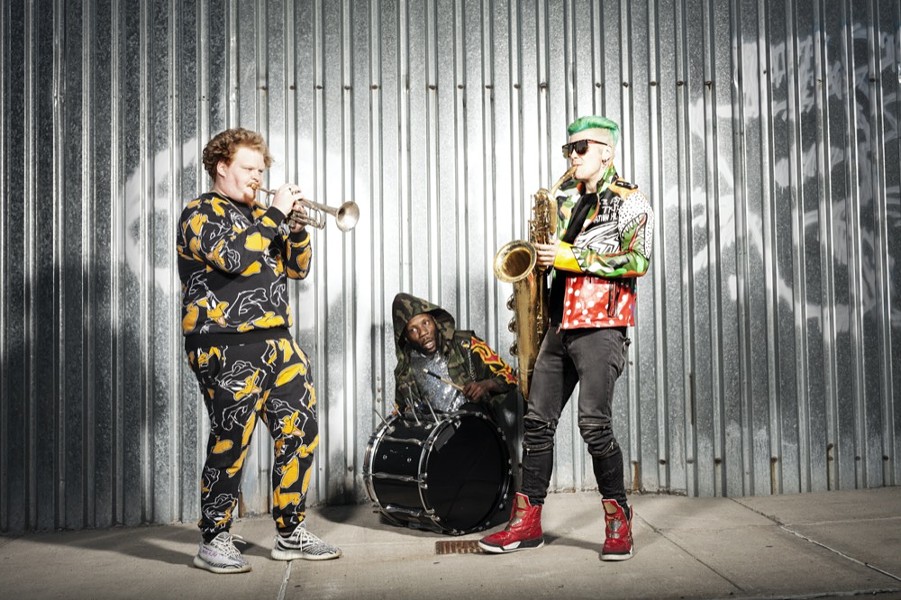 Too Many Zooz have come a long way from their early days busking on subway platforms beneath the streets of Manhattan.

The self-described "brass house" trio's first video was a single-camera, single-take, and completely improvised jam that they recorded in the Union Square subway station when they were just starting out. It was posted to YouTube in 2014 and has gone on to rack up more than 7 million views.

In the years since, they've collaborated with high-profile celebrities like Beyoncé and the Dixie Chicks, as well as more cutting-edge artists like British soul singer Jess Glynne and EDM producer Kaskade. They've now reached a level of pop-culture success where their sax player is having to sue Fortnite developer Epic Games for purportedly ripping off his likeness and "signature moves" without permission.

As impressive, and highly unusual, as this list of achievements may be, Too Many Zooz trumpeter Matt Doe is no less proud of the trio's humble underground origins.

"At the time, it felt like the music world viewed us as second-class citizens, and I couldn't understand why they didn't get it," he says of the group's subterranean playground. "But, for us, it was literally such a no-brainer. Every band in New York City is looking for a rehearsal studio, right? And we not only had a rehearsal studio, we were getting fucking paid – and paid well – to rehearse."

While the vast majority of street performers earn their rent by sticking to a repertoire of familiar cover songs, Doe and his partners in crime – drummer David Parks and baritone saxophonist Leo Pellegrino – decided to take the opposite route.

"We would go down to the subway and just improvise," says Doe, who studied jazz performance alongside Pellegrino at the Manhattan School of Music. "We were literally just making shit up."

In the process, the trio created a larger-than-life sound that, when necessary, could blast its way through the busiest rush-hour frenzy. Once the station emptied out, they'd venture into even more uncharted musical terrain, playing off the otherworldly reverb and echoes of the subway tunnels.

It wasn't long before the band's irrepressible music and eye-catching dance moves reached well beyond those subway platforms. They began touring America, then Europe, while recording and releasing one album and five EPs over the next five years

Too Many Zooz' latest single and video, an instrumental cover of Billie Eilish's "Bad Guy," was released in mid-September. Two weeks later, it was closing in on a quarter-million views. The track craftily juxtaposes musical genres, shuttling from Dixieland to dubstep, with a number of genre-blurring stops along the way.

As it turns out, the band's fans weren't the only ones paying attention. After a string of lower-profile collaborations, they received an unexpected invitation from Beyoncé to appear on her 2016 album Lemonade. The full band participated on the track "Daddy Lessons," while Doe also contributed trumpet to "Formation."

"Anyone who knows me will tell you that I'm the last person to get excited about all this," says Doe. "Of course, I'd be lying if I said that getting a call to work with Beyoncé wasn't exciting, but, for me, I try to approach every session the same way. If you're going to take the job, do the job, you know what I mean? And with Beyoncé, it was the same thing: You show up and do your very best with what you have – which, in my case, is my trumpet – to serve her record."

But when it comes to their own music, Too Many Zooz gleefully celebrate random acts of creativity.

"It's not that there's no such thing as a bad idea, because there are bad ideas," Doe says. "But it's more like, everyone in this group is entitled to say, play and act however they want. None of the three of us are ever going to be like, 'Yo, don't play that,' or, you know, 'don't say that.' Like, we just don't give a fuck."

Doe views the bigger picture in much the same way. "We live in a world where people will make fun of you and condemn you for just trying something different," he says. "So if you're in a place where your ideas are constantly challenged, and there's this dictatorship over your creativity, fucking leave. Just run so far from that. Because if you hold onto that mentality, you'll never ever evolve or change."

– This story appears in the Jan. 8, 2020, print issue of Orlando Weekly. Stay on top of Central Florida news and views with our weekly Events newsletter.