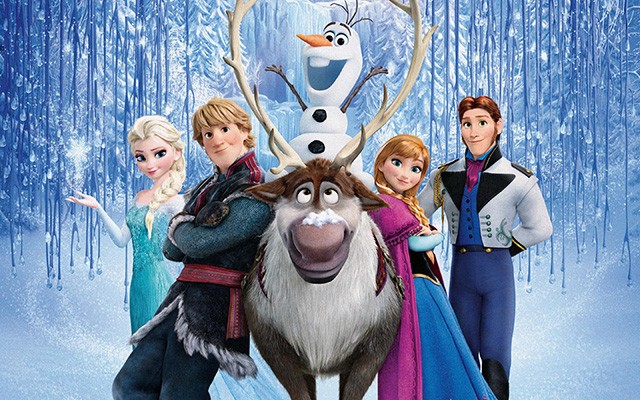 If at first you don't succeed, try, try again. At least that's what Disney thinks, as it's finally brought an animated adaption of Hans Christian Andersen's The Snow Queen to the screen after three failed attempts – the first by Walt himself back in 1943, when he decided it was too problematic.

Perhaps directors Chris Buck and Jennifer Lee felt the same, as their version (written by Lee) has little in common with the fairy tale. Gone are many of the story's complexities and its spiritual overtones, replaced by an odd mix of drama, music and comedy designed to entertain the kids and distract the adults from the mediocrity.

The film focuses on Snow Queen Elsa (voiced by Idina Menzel) and her loving but naive sister Anna (Kristen Bell). After their parents discover the dangers of Elsa's magic – she turns everything she touches to ice – they lock her away. "Conceal it; don't feel it," they beg her, not realizing that the repression of her powers will result in the unhealthy abandonment of all emotion, including love. Only years later, once Elsa has ascended to the throne and accidentally unleashed an eternal winter, do the sisters confront their feelings.

In true Disney fashion, there's romance and an adorable sidekick in the mold of Jiminy Cricket or Timothy Mouse. (Are we still trying to copy Pinocchio and Dumbo?) This one is called Olaf the Snowman, and he is admittedly cuter than most and voiced (and sung) nicely by Josh Gad, best known for his Broadway turn in The Book of Mormon. Yet he, and virtually everything else in Frozen, seems to be trying too hard to bring back the musical magic of Disney films from the early 1990s. There are a couple of good tunes ("Do You Want to Build a Snowman?" and "In Summer"), but the level of contrivance, not to mention the overly poppy, modern song style, is off-putting and diminishes what could have been an impressive film if not for the lack of maturity in writing, directing and voice-overs. While creating a work of naturalistic, 3-D digital beauty, they forgot to add a spoonful of sincerity and visual innovation in the style of, say, Hayao Miyazaki.

Kids will love Frozen – and it's admittedly better than the recent Planes, if not as good as Tangled – but the treat for adults will be the accompanying cartoon Get a Horse! Directed by Lauren MacMullan, the seven-minute short is a masterful mix of hand-drawn black-and-white and 3-D digital color, bringing back to life the Mickey Mouse adventure-comedy from the late 1920s and then, in a brilliant and surreal twist, breaking the fourth wall and throwing that old world wildly into the present. Featuring the original gang of Mickey, Minnie, Peg-Leg Pete, Horace Horsecollar, Clarabelle Cow and even Oswald the Lucky Rabbit, the film is a unique work of cinema deconstructionism and an animation lover's dream.

If Frozen leaves you frosty, come for the warmth of Get a Horse! And if you don't get goosebumps during the credits when it's revealed that Mickey was voiced by Walt Disney (by using old voice-overs), then your heart truly is ice.