If our favorite ice cream places were characters on ‘Game of Thrones,’ who would they be? 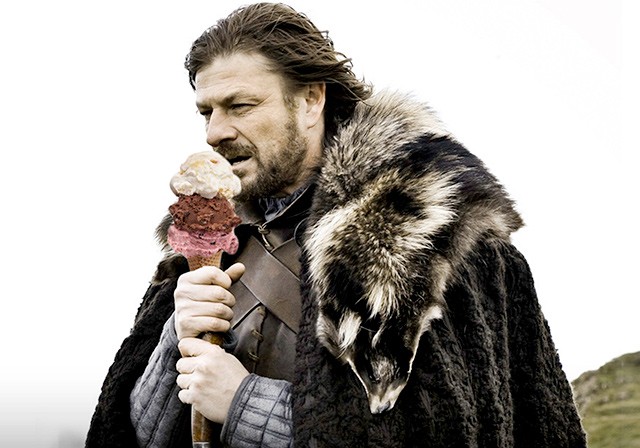 A Song of Ice and Fire … it’s the name of George R.R. Martin’s mega-popular (in both book and HBO series form) Game of Thrones fantasy series, but it might as well be describing summer in Orlando, when the blazing temperatures are best tamed by a steady supply of ice cream. When the days and nights are as hot as a jar of Tyrion Lannister’s pyromantic wildfire, you may wish you could take a quick trip up north to Winterfell to cool off. There’s no way for us to send you into a fictional universe, but here are a few cone shops where you can at least briefly conquer the heat. Because when you play the game of cones, you win or you sweat.

Game of Thrones is notorious for killing off beloved characters. One of Orlando’s longest-running ice-cream stands – they’ve been serving for more than half a century – is also one of its most beloved, but rest assured: Goff’s Drive In will never kill off their house-made chocolate-dipped soft-serve vanilla cone. Goff’s Drive In, 212 S. Orange Blossom Trail, 407-286-3421

Daenerys Targaryen is a fierce warrior, to be sure, but she has her maternal side – not only is she the “Mother of Dragons,” but thousands of downtrodden children of Astapor call her “Mhysa” (mother), too. The Audubon Park kids that crowd Ice Cream Treats and Eats are neither Astaporian refugees nor baby fire-breathing lizards, but they’re fiercely loyal to the many-flavored cones served at this community favorite just the same. Ice Cream Treats and Eats, 3114 Corrine Drive, 407-894-0286; facebook.com/icecreamtreatsandeats

Lord Petyr “Littlefinger” Baelish owes most of his fortune to his many King’s Landing “pleasure houses.” Although Milk District-adjacent gelato parlor 4 Delights’ name might put you in mind of one of those houses, the only delights on offer here are the edible kind. But a waffle cone full of caramel, rum raisin and pumpkin cheesecake has charms to rival those of the wily Ros. 4 Delights, 3214 E. Colonial Drive, 407-615-6020; 4delights.com

When Arya Stark’s bastard half-brother, Jon Snow, presented her with her very own child-sized sword, he also gave her the basic tenet of swordplay: “Stick ’em with the pointy end.” Although the many Twistee Treat locations around Orlando are shaped like flat-bottomed cake cups, fear not: They also serve their famous soft-serve twirled into sharp-tipped sugar and waffle cones. Twistee Treat, multiple locations; twisteetreat.com

Sweet, petite Margaery Tyrell is the newest contender for the queen’s crown, and whether or not she and Joffrey survive, she is certainly adored by the people of Westeros. Next door to Winter Park’s Eat More Produce, a pretty little cottage housing Lu Lu’s Ice Cream Shop recently appeared, dishing out sweet, petite cones, but Lu Lu’s has a secret – if you look closely, you’ll see the shop is on wheels. No word yet on whether they’ll be making the food-truck rounds, but it appears they’re versatile and ready to change course at a minute’s notice … just like Margaery. Lu Lu’s Ice Cream Shop, 1111 S. Orlando Ave., Winter Park, 407-470-8863; facebook.com/lulusicecreamshop