The enlivening of the South Orange corridor between Michigan Street and the town of Edgewood continues. Gatlin Hall Brewing's opening complements its neighbors — The Porch, Buttercrust Pizza and anchor Brazas Chicken — as yet another excellent option for happy hour, casual weeknight eats and leisurely weekend hangs.

The dozen beers produced on site at Gatlin Hall are crafted by brewmaster Tyler Rosenberg. A native of Tampa, he's crossed the I-4 corridor coming from Carrollwood Brewing Co., Coppertail Brewing Co. and Cigar City Brewing, where he brewed the core brands as well as the special edition and barrel-aged beers. He assisted Cigar City in bringing home Florida's sole gold medal from the Great American Beer Festival in 2019. Rosenberg has also received more than 50 medals for his original recipes and was named Florida Homebrewer of the Year in 2017.

All this is to say: The beers at Gatlin Hall are very good.

The tap room is the main attraction — an expansive but somehow comfortable and cozy space with high-top tables, a 40-plus-foot bar with stools and oversized booths lining the front windows. The bartenders are more than accommodating for first-timers to the spot, offering samples of any of the dozen beers on tap. Unlike many other breweries, Gatlin Hall Brewing also offers a full bar, so if you're hanging with friends who prefer a bev with more bite, cocktails and wine are also available. 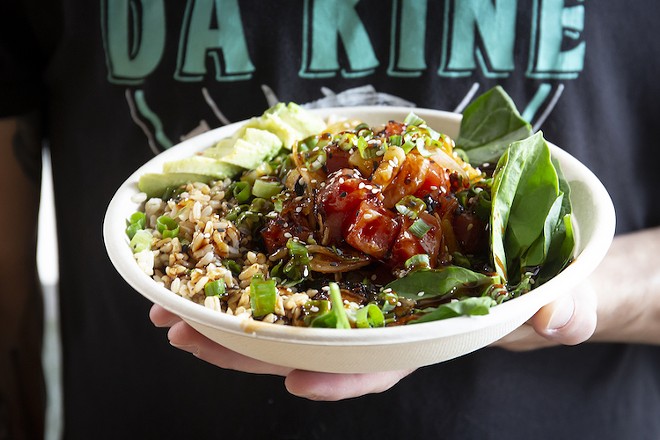 On the night I visited, Rosenberg's beers occupied seven of the 13 taps. Three of the remaining taps contained Orlando-based beers from other local brewers (Ivanhoe Park, Ravenous Pig and Ellipsis), two from Tampa (Angry Chair and Late Start) and a Key lime pie-fruited Berliner Weisse to write home about from Proof in Tallahassee. Beers are available in five- or 16-ounce pours, and a flight includes three of the five-ouncers.

A fan of complex crafts, I particularly liked the hoppy Ghost Dog New England pale ale ($6 for 16 ounces) and the Stormbreaker Imperial IPA ($8 for 16 ounces), which clocks in at a hefty 8% ABV. It's brewed with Kveik yeast and a blend of El Dorado, Azacca and Strata hops. The nose is incredible — rich with florals that whet the palate.

Three restaurant counters line the south side of Gatlin Hall Brewing, including a fourth location for Da Kine Poke, Willy's Original for burgers and fries, and the soon-to-open Frenchy's Wood-Fired pizzas. The SteakHouse burger ($14) from Willy's was a favorite at the table, with a hefty patty, cheddar cheese, thick-cut bacon and LTP. I also liked the grilled chicken & avocado sandwich for a lighter option, which showcases a nicely glazed (albeit rather skimpy) grilled chicken breast smeared with guac.

I couldn't stop eating the shoestring fries ($4.50), which were beautifully crispy and topped with a generous amount of Parmesan and fragrant rosemary. We also ordered the crispy cheese curds ($6), and while fabulously flavorful, they were just a bit too greasy and ended up as a congealed mass at the bottom of the cardboard serving dish.

Da Kine is offering the same menu as at their other locations, including the perennial favorite El Diablo and lots of options for build-your-own bowls. I'm looking forward to trying Frenchy's on another visit. The tiled red and black pizza oven looks promising; the menu is up on Gatlin Hall's website if you want a sneak peek. The Funghi Bianco, with mozzarella, wild mushrooms, scallions and white truffle cream sauce looks tempting. Gatlin Hall is also inviting pop-up vendors to visit — Chill In Tacos Ice Cream Taqueria recently visited and others are on deck.

On the sleepy Tuesday night I visited, I asked the bartender when to expect the biggest crowds. The lunch rush is popular, as are Monday nights for football and weekend college game days. Gatlin Hall's happy hour, where all drafts are $1 off, runs from 3 to 7 p.m. weekdays, and also brings the crowds. As the weather cools, the outdoor space at Gatlin Hall will be in high demand. With plenty of tables, oversized games like Jenga and cornhole, and strung with ambient market lights, it's a gorgeous place to gather where you'll have plenty of room for both two- and four-legged friends.