Georgia metacore band the Chariot says no to studio tricks

Vocalist Josh Scogin on Norma Jean, Long Live and the importance of being live 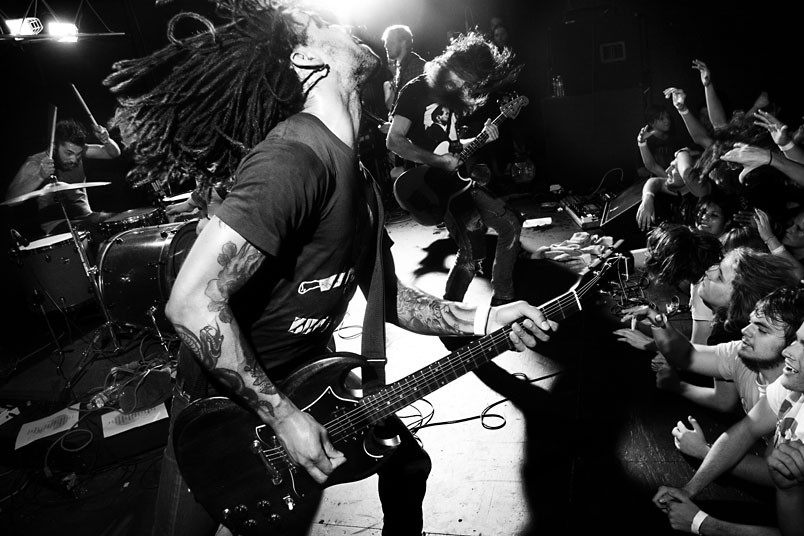 with Haste the Day, My Children My Bride, A Plea For Purging, With My Bear Hands

Vocalist Josh Scogin caught hardcore music fans by surprise when he left the Douglasville, Ga., band Norma Jean shortly after they recorded their first album, Bless the Martyr and Kiss the Child, in 2002.

Now four albums into the career of the Chariot, the metalcore band he started after his Norma Jean stint, Scogin senses there aren't many people that question the path he has followed with his music career.

"One kid put it really good to me, and I feel like maybe a lot of people feel like this," Scogin says. "He put it like, `I love the stuff you did with the Bless The Martyr record with Norma Jean, and it would have been cool to see where that would have kept going. But I love the Chariot as well. And so maybe if there were two of you, that could have made sense, and we could have [had the ?best of both]."

Chances are that a lot of people that liked early Norma Jean have become Chariot fans. Touring on its fourth CD, released late last year, the band has established a significant presence on the hardcore/metalcore scene as a group that is willing to go outside of the usual musical boundaries of the genre.

With their debut album, 2004's Everything Is Alive, Everything Is Breathing, Nothing Is Dead and Nothing Is Bleeding, Scogin displayed his willingness to follow his artistic instincts by having the band record the entire CD live, in one take, with no fixes or overdubs after the fact.

The album, Scogin says, was a reaction to the way so many groups - even ones that call themselves punk bands - make albums to click tracks, sample instrumental parts and then fix anything that is off-time or off-pitch.

"What's punk rock about that?" Scogin says. "I think it was just so in my head about what has happened, so almost out of rebellion, I just was like, `We're recording it live no matter how it sounds.' A lot of people got it. A lot of people sort of gravitated toward it and understood it."

Since then, Scogin hasn't been quite so militant about it. He feels that he and his current bandmates found a good balance on the new album.

"With Long Live, I feel like we had the best of all worlds. We recorded the parts that we wanted to totally live and totally together as a unit," Scogin says.

And like other Chariot outings, the band wasn't afraid to step outside of the metalcore box. While its sound is built around a maelstrom of raw guitars and beats, the band flips the script here and there with a choir, melodic classic-rock riffs, and a sampled female vocal.

That the Chariot also retained their authentic live sound on Long Live makes sense considering Scogin believes the best way to understand the band is to see it live.

He adds: "I think everything we do sort of stems from the live show and not the other way around."