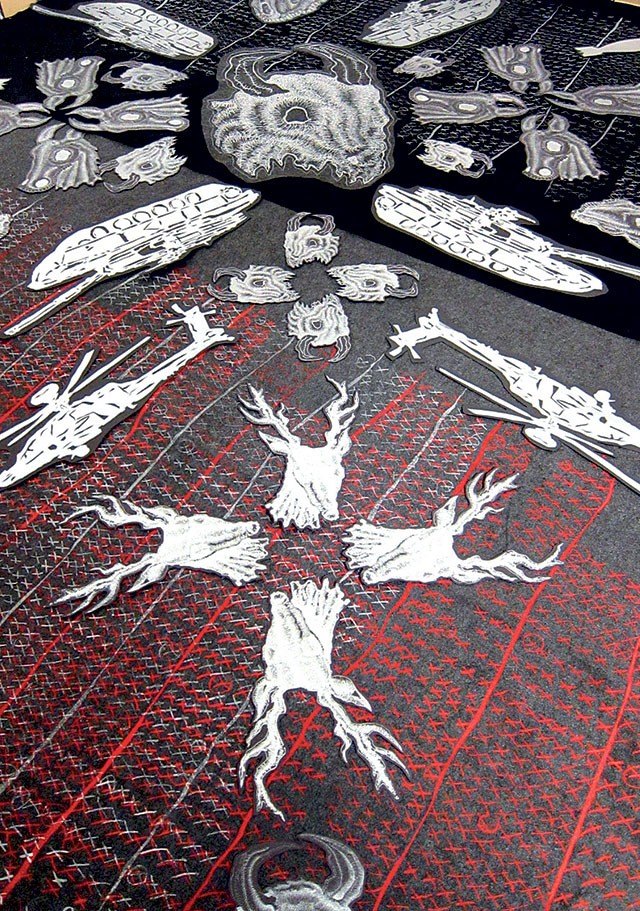 Holt Avenue, passing through the heart of Rollins’ distinguished and leafy little campus, descends down a bumpy brick hillside and comes to rest at the Cornell Fine Arts Museum on the shore of Lake Virginia. Inside this quiet little corner of campus there seethes and shudders a show
called Ghosts of Brutality. John Hitchcock’s war machines and death’s-head totems jar your eyeballs with images that are not quite street art, but more than genteel easel painting, in a timely installation piece.

Amidst this float large deer skulls, buffalo heads, coyotes and other creatures symbolic to the Comanche and woven into his narrative of death. The spirit of the attacked tribal lands, represented through these blank-eyed beings, seems to come forth in mute agony. Along the bottom of the gallery walls is a row of odd, square hieroglyphs almost Mayan in nature, and on the floor – don’t step on them – are a cluster of these skulls in pinwheel formations and swimming on a black sea of war.

Elsewhere, one walks on a fabric mat printed with geometric patterns, symbolic perhaps of traditional Comanche artisan work. At the end of the gallery, a video that dissolves images of buffalo, gunners’ targets, bombs and the word “hypocrisy” loops over and over, its self-important narrator sounding ever so much like the 1970s evening news reporting on the war. The cumulative effect is to make you shudder at the immense brutality of institutionalized destruction for the sake of destruction.

Hitchcock, as a professor at the University of Wisconsin-Madison, led his students in making screen prints and this collaborative process yields an almost ritualistic approach. A buffalo head – its craggy horns sharp-tipped ­– looks like a weapon, with a blank eye staring at the viewer. The casual, cartoon-like scribble of an Apache Longbow helicopter suggests a terrible intimacy with this aircraft, and repeated over and over it takes on a monstrous appearance. The murmuring video, volume too low to provide more than ambient noise, is the only calming presence in an otherwise alarming room.

Ghosts of Brutality should make proud old men who are anxious to send our youth out to foreign conquest stop and think twice. War, as depicted by Hitchcock, is not glorious at all; it is haunting and hollow. The spirits of these haggard animal ghosts loom large in the room, leaving the viewer no escape from their penetrating, unblinking stare. Heal the home first: It will be a difficult enough achievement, and a lifetime’s effort that is truly worthwhile.