Giraffas Brazilian sticks its neck out

Fast-casual steak-and-burger chain has grand expansion plans, but execution needs to keep up 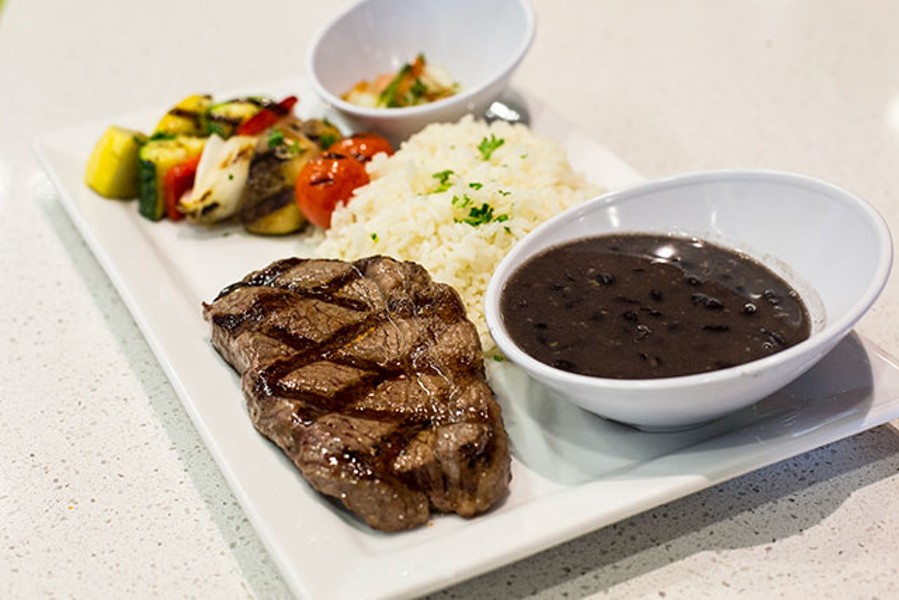 The Brazilians scored big (goooal!) when they gave us churrascarias, with their never-ending cuts of skewered meats. Then I read about a fast-casual steak-and-burger joint out of Brasília poised to sweep across the Florida Peninsula. And it’s … giraffe-themed. That’s right, I said giraffe. Themed. But far be it from me to judge a restaurant simply by its chestnut-patched, long-necked ruminant motif, so off we went to the Land of Brazilian shoppers.

We parked in the sun-baked lot of the Orlando Crossings shopping plaza and, after dodging an indecisive tour-bus driver with a seeming disregard for the limbs of locals, we entered. To our surprise, the interior – bright, modern, dare I say tasteful – was hardly the playhouse caricature we expected. Formal dining tables and chairs upholstered in a green-gold satiny finish caught our eyes as we approached the trio of screens displaying Giraffas’ beefy menu: steaks and grilled meats on the first, burgers on the second, and chef’s specials on the third. Included in said screens are how-tos for ordering steaks and burgers, making the whole process quite simple.

This being a fast-casual restaurant (as opposed to Giraffas’ quick-service operations in Brazil), we took a number, swung by the soda fountain and took our seats on those plush, shiny chairs. The place is quite popular among Brazilians – no surprise – but it didn’t seem as though any of the servers spoke Portuguese (a ploy to draw more locals and non-Brazilians to the restaurant, perhaps?). Our table looked out onto the courtyard, where we saw a number of Brazilian tourists relaxing next to newly bought extra luggage. This place can’t fail, I thought, just as the first of many lackluster dishes began arriving at our table.

The first, a fatty 10-ounce picanha or rump-cap steak ($13.90), was woefully overcooked, though forking morsels into the accompanying peppery chimichurri sauce helped somewhat. Any chance of redemption was squashed by sides of hard rice and Brazilian farofa (toasted cassava flour; think bacon-flavored sawdust). The “Giraffao” burger ($12.30) featured a thin and also overdone cut of filet mignon topped with cheddar, bacon, egg, lettuce, tomato and mayo. The bun was as taut as J.Lo’s left cheek, but that didn’t help this “burger” any. Accompanying fries were a bit tough, too.

Overdone filet mignon was also a primary ingredient in the beef Stroganoff ($12.40), but it was the sweetness in the sauce that took the comfort out of the dish. It’s possible that a sweet cream was used for the sauce instead of sour cream; that, or they simply added sugar to it, but either way, we couldn’t get past it. Sides of ordinary white rice and cold mashed potatoes made the dish, well, not great.

There were high points. Chicken ribs ($3.90) marinated in Brazilian spices provided a nice break from all the red meat, and these baked bones proved delightful. Desserts, like the warm, chocolate-filled petit gateau ($4.70) and the guava cheesecake ($4.40), ensured we exited the restaurant on a sugary high.

Rapid expansion is central to Giraffas’ business model, and the chain plans to move into a space in Mills Park in the coming months. But given the execution of the dishes we sampled on I-Drive and the number of quality eating establishments along Mills Avenue, I’m not about to stick my neck out and guarantee their success.