The Orange You Glad music festival finds its legs in its crucial third year. We look at the roots and fruits that make up this tree of local culture

by Bao Le-Huu and Justin Strout 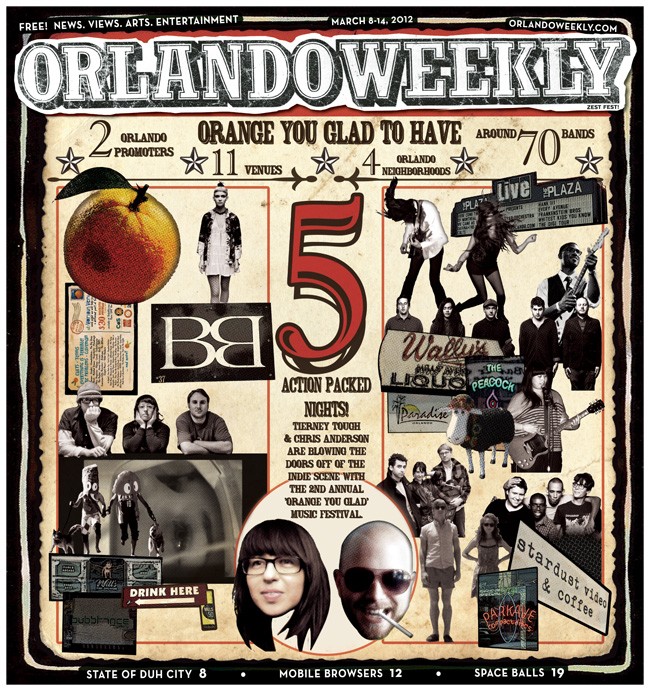 Featuring approximately 60 bands at 11 different venues, this second full-scale edition of the Orange You Glad Music Festival may seem similar to its debut in size, but one look at the lineup and it becomes clear that we’re in for an eye-poppingly improved reboot.

Although the indie ethic is still OYG’s gospel, the event is taking some assertive new steps that position it to perhaps become the city’s next sizeable independent rock fest. Most significantly, festival mother Tierney Tough brought in new heavyweight partner Chris Anderson (Parafora Presents), one of the city’s premier indie-minded bookers. The immediate result is a serious vault in the caliber of national talent on this year’s well-curated roster, bands that are on the very cusp of popping. Making this bill even more exceptional is that it’ll be the only Florida tour date for many of the national headliners. It’s precisely this degree of selectivity that could soon make OYG Orlando’s most tastemaking music festival, and from the way the organizers say things have been unfolding, the new Tough-Anderson alliance could be permanent.

Another new and innovative cultural aspect this year is that the event is structured as a mini-tour of hip Orlando. Besides showcasing select bands, it’ll also highlight the city’s most active and colorful zones (Mills 50, Audubon Park, Milk District, Downtown), taking over and focusing on just one each night to maintain festival walkability. It’s a notably deliberate gesture by the organizers that more deeply establishes OYG’s sense of place – and most importantly for the forward-thinking, that there is a sense of place here now.

With such big, pivotal developments lining up, Orange You Glad looks more and more like the vibrant, living, non-tourist postcard of the city’s independent music scene that it was always meant to be.