GLOBAL WARMING The right-wingers cast doubt on its existence – or worse, welcome it as a sign of the end times – but the rest of us know that global warming is a very real and potentially catastrophic trend. So does Ybor City artist Theo Wujcik, whose cautionary exhibit "Global Warming" has found its way to Orlando to make an impression on still-reachable hearts and minds. The 17 large-scale paintings are said to have been rendered in ironically happy color schemes, forming an illusion of tranquility that's intruded upon by 5-inch squares – "pixels," Wujcik calls them – that symbolize the adverse effect of apathy on a citizen's consciousness. "The causes and effects of global warming are well publicized," Wujcik says; let's hope the effects of "Global Warming" are just as measurable. (continues through May 28 at Millenia Fine Art; 10 a.m.-6 p.m. Tuesdays through Saturdays, noon-5 p.m. Sundays; free; 407-226-8701) 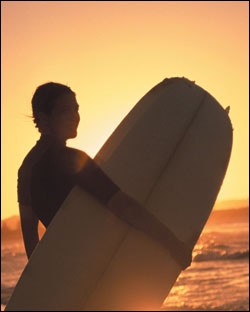 RON JON EASTER SURF FESTIVAL Today's biggest surfing stars from around the world take over Cocoa Beach for the 42nd annual Ron Jon Easter Surf Festival. Those who have saltwater on the brain will compete in 14 tournaments offering more than $25,000 in cash and prizes for the winners. Newbies can learn to surf for free at Shepard Park from 9 a.m.-4 p.m. on any of the four days, or just watch the action. Displays, autograph sessions, photos with the scantily clad Reef Girls and a celebration in honor of the East Coast Surfing Hall of Fame and Museum are also on the agenda. (continues through Sunday, April 16, at the Cocoa Beach Pier and Shepard Park; free; 321-783-7549)

CRACKER JACKSON/SPACEBAR Hey! You got your goofy tracksuit rapper and your insanely catchy guitar band! This show features two of our favorite Orlando acts, but we love them for completely different reasons. We're still trying to figure out if Cracker Jackson is covering Lord Grunge or the other way around, but either way, this ex-Nature Kid is always entertaining. Spacebar? Well, you try and write a song as infectiously rocking as "One To Remember" and then get back to us. (with The Real One, There Alone; 9 p.m. at AKA Lounge; $5; 407-839-3707)

TIMOTHY WHITE What if you held a book signing and there were no books to sign? This event doesn't quite reach that level of conundrum, but as part of their Art of the Motorcycle exhibit, OMA is bringing in photographer Timothy White to sign copies of his new book Indian Larry, an engaging and emotional photo meditation on the life and obsessions of one of the bike world's most colorful and well-known figures. Thing is, the book's not out yet. However, 100 copies will be made available for advance purchase at the OMA gift shop (you'd be well-advised to call the gift shop ahead of time to make sure you get one), allowing fans not only to get their book signed, but also to get the book before anyone else does. (6 p.m.-8 p.m. at Orlando Museum of Art; gallery admission $5-$15; 407-896-4231)

EASTER WEEKEND OPEN HOUSE We like to think of Easter as a time to let the sun shine through. And when the light comes through the kaleidoscope of colors framed in Tiffany windows and other glass works, the transformation is ethereal. The Charles Hosmer Morse Museum of American Art is bursting with the beauty of unique works by Louis Comfort Tiffany, having added several new exhibits to the permanent collection. A Florida Gallery focuses on state-centric art and artifacts; Windows & Wonders: Tiffany From the Morse Vaults shows off a dozen supersize leaded-glass windows, as well as 90 other rare works; Domestic Treasures: Tiffany Art Glass for the Public gets more practical with vases, tableware and mosaic tiles. Best of all, as is custom, the museum waives its admission fee for the long weekend. While it's the eyes that take in the images, it's the soul that fills up. (9:30 a.m.-8 p.m. Friday; 9:30 a.m.-4 p.m. Saturday; 1 p.m.-4 p.m. Sunday at Charles Hosmer Morse Museum of American Art; free; 407-645-5311)

BOK SANCTUARY EASTER SUNRISE SERVICE Watching the sun peek over one of the highest hills in Florida (298 feet above sea level) surrounded by acres of ferns, palms, azaleas and magnolia blooms, as carillon bells toll out ancient melodies from a 205-foot tower, you could almost forget you're in a church service – or maybe it'll be more like church than any pew ever would. Whatever your religious leanings, Bok's scenery and architecture are always worth the drive, but Easter Sunday offers something unique: a chance to witness daybreak with the 2,000 others who gather annually for this 80-year-old tradition. Bob Mobley, of First Assembly of God in Lake Wales, will officiate this year, with music by the Lake Wales Chorale and the Tower Brass, followed by a 30-minute carillon (picture an organ made of bells) concert. (The press release advises bringing your own lawn chairs, as well as flashlights and bug spray, "due to the early hour and time of year.") After all that, you can head your starving self over to the Carillon Café for a special buffet breakfast ($7.95 per person). If you just can't drag yourself out of bed early enough for the sunrise, you can catch half-hour carillon concerts at 1 p.m. and 3 p.m. and enjoy the scenic gardens at a more godly hour. (seating begins 6 a.m., service starts 7 a.m. at Historic Bok Sanctuary, Lake Wales; free admission before 8 a.m., members free all day, non-members $8 after 8 a.m.; 863-676-1408; www.boksanctuary.org)

TWO GALLANTS We can't get over how much Two Gallants sound like Cat Stevens after losing a bar fight, but we doubt that Yusuf Islam would ever let loose with a lyric like "I'm gay as a choirboy for you." Somehow both folksy-and-trashy and elegant-and-elegiac, Two Gallants are a thoroughly deceptive duo from San Francisco; their acoustic approach belies the brusque intensity of both their sound and their sentiments. (6 p.m. at Park Ave CDs; free; 407-629-5293. 8 p.m. at Will's Pub; $7; 407-898-5070)

MACHINEDRUM If the Orlando music scene were the Justice League, then Machinedrum would be the Green Lantern. He's always flying off to other galaxies, coming back weeks later like, "Batman, you gotta hear this record." Then Batman says, "Whoa, did you buy this on Zoltac 9?" Then Green Lantern replies, "No, I made it," and Batman's head explodes. Machinedrum (Travis Stewart by day) has been saving our fair city for six years now with over 15 albums under several different names on an assortment of electronic indie labels. This year, he's already put out a full-length album and a battle record for other DJs. This month finds Machinedrum teaming up with Lane Barrington (The Band of the Name/The Ocean Floor) on drums and traveling to Europe for two weeks of festival and club dates – but you can catch them this week before they leave. Who knows what they'll come back with? (with Yip-Yip, DJ Jaunty, Ironing and Travis Phaser; 8 p.m. at Back Booth; $5; 407-999-2570)

CIRQUE DU SOLEIL: DELIRIUM We love those hyperbole-crazy cats at Cirque du Soleil. To hear them tell it, their first-ever arena show, "Delirium," isn't just a ginormous conflation of music and spectacle, but a "quest for balance in a world that is increasingly out of sync with reality." It's not every day that a circus gets to hire Deepak Chopra as its publicist; then again, "Delirium" sounds like far more than the average touring-circuit entertainment, putting the musicians of Cirque front and center to perform updated versions of 20 of the franchise's most popular soundtrack tunes while dancers and acrobats flail madly around them. Typically outlandish stage rigging and multimedia projections will reinforce the rhythmically intense musical forays, augmented for the first time ever! with actual lyrics (in five different languages). The overall package, the Cirque-sters say, is one that "transports audiences into a universe of delirious sensory folly." And for more delirious sensory folly, be sure to down a few cold ones at Hoops after the show. (8 p.m. at TD Waterhouse Centre; also Wednesday; $68.50-$124; 407-849-2020)