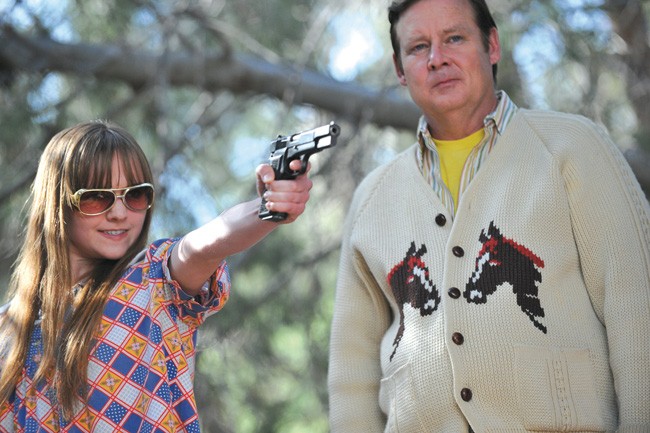 We all know that the world has become a din of media – each TV show, each movie, each singer screaming at the top of their lungs for our attention. The talentless shout the loudest because this is their only talent. We all hate it, but we all participate in it, willingly or otherwise. Even in the gleeful haze of his revenge fantasy, God Bless America, so does writer-director Bobcat Goldthwait.

To that end, we get Frank (Joel Murray), a divorced, schlubby, middle-aged misfit who just shrugs his way through life and is beyond tired of the way other people live their lives. When he finds out that his persistent headache is an inoperable brain tumor, though, their loudness, their shallowness, their selfishness and their screaming babies that eat away at his sanity on a daily basis – well, they've got to go.

Starting with his loud neighbors (even their noisy baby), Frank goes on a cathartic cross-country killing spree, picking up the stray teen Roxy (Tara Lynne Barr) along the way. She's even more pissed off at the world than he is, a nice twist on the film's evident Taxi Driver influence. Unfortunately, they're right about people more often than they're wrong: Most of the people they want to get rid of are the same assholes most sane people dream of getting rid of.

It's a warm sensation to sit back and watch other people act out the temporary rage impulse within all of us. The sensation runs out rather quickly, though, leaving us with only the exceedingly threadbare story to hold it all together. Yes, Frank is guilty of a lot of the things he hates, and a lot of what Roxy hates. Roxy is also just as awful as the kids in her high school she wants to kill. We probably are, too. It's an inescapable fact of life lying just beneath the surface of not only this film, but Goldthwait's 2009 dark outing, World's Greatest Dad, but these aren't mirrors. To take it at anything but strict face value would be to destroy it needlessly.