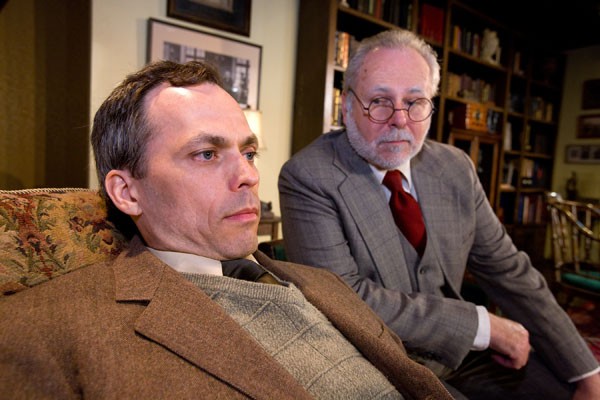 Sept. 3, 1939. England is on the verge of WWII, air raid sirens wail in London's streets and Neville Chamberlain is whingeing away on the radio. If you've seen The King's Speech, you already know what happens next: King Colin Firth stammers his way through an inspirational speech while Geoffrey Rush whispers the F-word in his royal ear, and the free world is instantly saved (or something like that).

In the imagination of playwright Mark St. Germain, an equally momentous (if ahistorical) meeting occurred simultaneously across town from 10 Downing St. Freud's Last Session, St. Germain's new play which recently  made its debut in Orlando at Mad Cow Theatre after an acclaimed run in New York City last year, posits the atheistic auteur of modern psychoanalysis encountering C.S. Lewis, the influential Christian thinker and father of the Chronicles of Narnia series of fantasy books. The theatrical meeting of these mighty minds makes for engaging, even occasionally thrilling, debate on the nature of faith and the existence of God.

According to St. Germain's script, deftly directed here by Rick Stanley, Dr. Sigmund Freud (Terry Wells) is at the end of his career, ailing from oral cancer and on the verge of assisted suicide. Having fled to England to escape Nazi persecution in his native Austria, Freud summons the then-unknown Oxford scholar Clive Staples Lewis (Steven Lane) to his London office for a chat. Lewis assumes he's there to be criticized over his novel Pilgrim's Regress, which harshly satirized Freud's arrogant atheism, but he's surprised to find the doctor determined to engage in a mostly friendly discussion about spirituality and sexuality.

The intellectual giants butt heads over humanity's most enduring questions, tossing famous quotes and familiar arguments at each other in an endless cycle. There's more comedy infused in their interrogation than you might expect from such deep thinkers, but for the most part this is dense, deep material. If you're steeped in Thomas Aquinas and Joseph Campbell, the back-and-forth will be brilliantly fascinating; if your theological education ceased after confirmation, the philosophical references to G.K. Chesterton and J.R.R. Tolkien (a close friend to Lewis) may fly over your head.

Both actors ably embody their famous analogues, though the script and staging clearly give Lane's Lewis the edge in the argument. Wells' Freud looks the part but comes across as stiff and somewhat humor-impaired with his constant wincing and vaguely Germanic accent, especially in comparison to his warmly empathetic and deeply not dogmatic adversary.

The show's biggest flaw is that the debate never fully builds to its intellectual peak, but is instead blindsided by a gut-wrenchingly corporeal conclusion revolving around Freud's ill-fitting facial prosthetic. Perhaps this eww-inducing ending is intended to illuminate how even the most high-minded are ultimately undone by physical failings. Or maybe (as Freud once quipped) a cigar really is just a cigar. Lewis observes the absurdity of expecting "to solve the greatest mystery of all time in one morning," but this show remains gripping as long as they are grappling with it.