THOROUGHLY MODERN MILLIE/MENOPAUSE THE MUSICAL In keeping with the common knowledge that life's filled with conspiracy theories, the Orlando stop-down for the flapper lovefest Thoroughly Modern Millie means something BIG. We've yet to precisely decode it, but it's BIG. There's a suspicious line in the press release about the traveling Broadway show set in the post-World War I societal revolution: "It's the story of a Midwestern girl who arrives in New York determined to take the town by storm." STORM! And the timing is more than questionable: The midpoint of its run – tonight – is the same night as the last production before the New Year of Menopause the Musical at the Orlando Science Center. They've been packing mature ladies into that one every night for months on end; they dance and sing along like Rocky Horror cultists gone mild. We're not sure if any of this means anything, especially since Menopause gets going again only three days later ... on the same night Millie wraps! OK, wait. We're sure. It doesn't mean anything. (Thoroughly Modern Millie, 8 p.m. at Carr Performing Arts Centre, through Jan. 2; 407-849-2020; $34-$62. Menopause the Musical, 7:30 p.m. at Darden Adventure Theatre, continuing; 407-514-2000; $32.50)

DIRRTY HAIRY Options, as you see, for bidding farewell to 2004 are somewhat limited when it comes to music. Limited and very expensive. Thus, we come to that point at which we decide exactly what New Year's Eve is all about. Is it for drinking and celebrating and having a great time that you'll barely remember the next day? Or is it about building up ridiculous expectations in pursuit of a memorable evening that pins unnecessary significance upon the changing of the calendar? If your thinking runs toward the latter, please skip to the following entries for some suggestions, but don't say we didn't warn you. But if the former description comes closer to your philosophy of auld lang syne, then allow us to make one – and only one – suggestion: Go to The Social. For a reasonable price, one of Orlando's most stunningly unoriginal bands will play fairly accurate versions of some of the worst songs ever made. And it will be awesome, ladies and gentlemen. Dirrty Hairy – normally found in Casselberry sports bars and other establishments that prize quantity of alcohol intake and camaraderie – will be the entertainment for the evening, and their decidedly non-downtown menu is composed entirely of covers of '80s hard rock bands. Van Halen, Skid Row, Mötley Crüe. Opening? A Led Zeppelin cover band. Hell yeah, bo! Even if your hipper-than-thou ass has to pretend like you're going to be all ironic and shit, you know that this is the kind of party you want to use to forget about 2004. (with Physical Graffiti; 9 p.m. at The Social; 407-246-1419; $10) 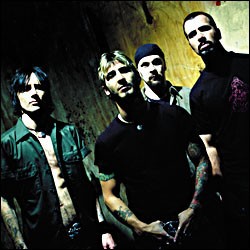 GODSMACK/ALTER BRIDGE If you've had a crappy year – as we did – you might be down in the dumps, looking forward to starting a new and, you hope, better year. But until the ball drops, what say you wallow in your self-pity one last time – it'll help you make a clean break with the bad and also provide a psychological demarcation between 2004 and 2005. To ease things along, we've devised a foolproof method to get the most pitiful bang out of your wallow dollar: First, upon finishing an entire bottle of Jack Daniel's and a second viewing of Old Yeller, promptly dispatch yourself to the Godsmack show. Be sure to arrive in time for the sensitive acoustic set. Bathe in the banality of their unplugged Wiccan-metal, make connections to your own banality and vocalize both of your banalities as loud as you can. Then, attempt to start a pit. (It is imperative that you do this before the band starts their second, "electric" set.) After the inevitable ass-kicking and/or ejection, groove on over to Alter Bridge. After a flask or two of tequila in the parking lot, wiggle a spot in front of Mark Tremonti. When Alter Bridge launches into their radio smash "Open Your Eyes" around midnight, recount your losses: You're out $220-$300 for movie rental, alcohol and ticket prices, and you're sitting front row at what amounts to a Creed show. It's only up from here. (Godsmack, 9:30 p.m. at Hard Rock Live, 407-351-5483; $86, $110. Alter Bridge, with Submersed and The Kick, 8 p.m. at House of Blues, 407-934-2583; $42.50, $95)

DAVID LEE ROTH Folks with a little more pocket change to throw around and a yen to see where Dirrty Hairy got the big idea should ring in 2005 with rock's one and only toastmaster general, David Lee Roth – who history is rapidly revealing as the only good thing that ever happened to the brothers Van Halen. So what if the eternally lustrous Diamond Dave chopped off his championship mane a few months ago, as part of his Page Six-celebrated training to become a certified paramedic? He can still throw down like skirt-lifting riff-a-rama never went out of style – that is, as long as your definition of throwing down depends more on a plutonium-bright personality and vaudeville-sharp timing than a perfectly preserved set of pipes. (And if it's technical proficiency you want, have fun dicking around the 'net at midnight searching for that Dream Theater gig in streaming audio.) Orlando's attractions are notorious for filling their stages with hard rock has-beens come New Year's Eve, but our man Dave remains the real deal – not to mention the only touring tongue-in-cheek vulgarian who's saved the life of a heart-attack victim in the last 12 months. So when he yells "Jump!", you'd best reply, "Clear!" (8 p.m. at CityWalk at Universal Orlando, 407-363-8000; $109)

CLUB PARIS From David Lee Roth – the hard-rockin' blond we can never get enough of – we move grumpily on down the line of celebrity succession to Paris Hilton, the rock-stupid blonde we'd prefer to endure in subatomic doses. As wise old DLR once pointed out, fame is a game of "Here today, gone later today," and acknowledging Hilton's place in that equation makes us want to ask one pressing question: Just what time is it, anyway? New Year's Eve represents the first look that paying customers will get at Club Paris, the instantly embarrassing vanity project our city fathers seem to think will somehow constitute a turnaround in the flagging fortunes of Church Street. Well, maybe for an hour or two: Last we heard, Ms. Simple Life wasn't even planning to stretch her all-important appearance at this holiday christening shindig to the stroke of midnight. Instead, she's said to be shuttling her bony ass to Las Vegas for the opening of yet another namesake nightspot. Well, la-dee-frickin'-dah. Guess it just goes to prove what we've always said: If there's a ball dropping somewhere, Paris Hilton needs to be involved. (7 p.m. at Club Paris, 407-849-0808 or clubparis.net; $199, $249)

FRANK SINATRA JR. There are all kinds of excuses that we could summon up to rationalize the cost of the road trip and the ticket price for this performance, none of which fall on the kitsch side of the equation. But it basically comes down to two things: We love gambling and we love Frank Sinatra. Gambling is experiencing a rebirth; alas, Frank Sinatra is still dead. But his kid is still alive, and, among the living Sinatra spawn, this is the only one who survived a kidnapping and didn't sing for Lee Hazlewood. Would we drive to Tampa to watch Nancy sing "Boots"? No. Would we go to see someone with Ol' Blue Eyes' blood coursing through his veins perform a tribute act that's just this side of creepy? Well, all you really need to ask yourself is: What time does the card room open? (6 p.m. at Seminole Hard Rock Hotel & Casino, also 3 p.m. Monday; 813-287-8844; $50)

TNA WRESTLING Talk about disappointed. Someone tells us there's something called T&A Wrestling going on here in town, and that we can watch it for free … then it turns out that we got a little screwed up with our acronyms. Rather than anything involving half-naked women, it turns out that TNA Wrestling is actually Total! Nonstop! Action! Wrestling. With big beefy guys and stuff. Beyond the, um, titillation factor, we were just shocked that anything so sexy could possibly be occurring in Orlando. (We should have known, though, when we found out the tapings were taking place at Universal.) Disappointed but still intrigued, we discovered during some research on www.tnawrestling.com that TNA is an upstart wrestling operation affiliated with NWA (the National Wrestling Alliance, not the rappers), filled with its own cast of heroes and villains and the requisite dose of drama. A lot of the wrestlers are up-and-comers, or, occasionally, guys that got fed up with politics and pay cuts in the WWE, so TNA's got a scrappy attitude that we really like. They film their weekly Impact! shows every other Tuesday, and admission is free. (6 p.m. at Universal Studios; 407-224-6000; free)