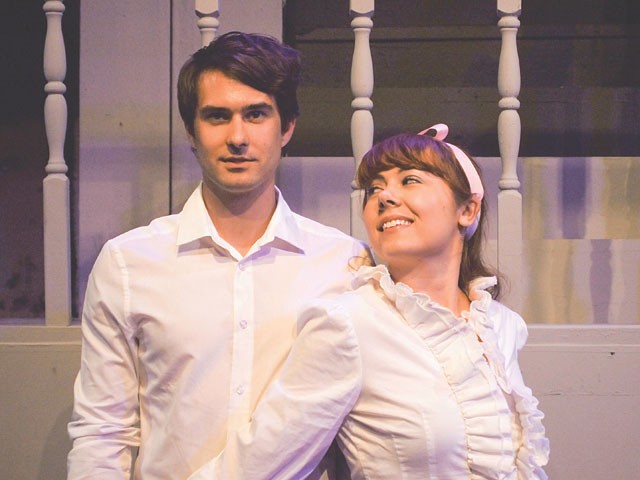 Last Friday night, as theatergoers were filling the Bob Carr to bask in Wicked's Broadway bombast, fans of Stephen Schwartz filed into a nearby venue to enjoy one of the composer's earliest works. Both musicals feature best friends divided by diverging destinies; but instead of being based on the books of Baum, Godspell comes direct from the mouth of St. Matthew.

After vanishing for a few years, producer Whitney Goin's Vine Theater (with whom I collaborated on several shows nearly a decade ago) has revived to co-present this Catholic counterpart to Jesus Christ Superstar with Theatre Downtown. Creator John-Michael Tebelak's 1971 script is a straightforward adaptation of New Testament homilies that merely provides a framework for performers to embellish. Director Zach Van Dyke, helming his first Orlando production, transposes the setting to a modern-day prep school, with Matt Rudman's set and Kaila Modomo's costumes lending a School of (Jesus) Rock-meets-(Un)Dead Poets Society vibe.

An army of apostles – their numbers fluctuate from nine to 13 depending on who is hauled onstage in any given scene – energetically act out the aw-shucks aphorisms of Jesus (Bryan Royals), while the banjo-strumming Judas (Patrick Sylvester, recalling a mop-topped Kevin Bacon) contemplates his betrayal. Rather than dry Sunday school lessons, the biblical parables are presented as goofy improvisational acting exercises, overstuffed with slapstick, sight gags and Rocky Horror-esque audience participation. The proceedings are peppered with pop-culture references ranging from current (Lady Gaga, Donald Trump) to questionable (priest rape, Casey Anthony) to curiously dated (O.J., Forrest Gump), building to a first-act climax that blends Stomp with the Blue Man Group.

Schwartz's hymn-inspired songs are unsophisticated yet hummable, and tunes like "Prepare Ye" and "Day by Day" get wedged in your brain, thanks to musical director Kyle Mattingly's contemporary arrangements, conducted by veteran keyboardist Julian Bond. The ensemble blends beautifully on choral numbers, but only a few (notably Joshua Roth, Dominique Allen Lawson and the sensational Rhyan Michelle Adams) have the chops to sell their solos. A muddy sound mix, compounded by microphone overuse, doesn't aid matters but isn't fatal.

With such high-spirited good will evident among the cast, it seems downright un-Christian to nitpick. But the unceasing wacky business slows the pace (this production runs 15 minutes longer than the 2011 Broadway revival) and obscures the gospels' simple message. Royals' milquetoast Christ isn't the charismatic rocker created by Ted Neeley in Jesus Christ Superstar, nor Victor Garber's hippie vaudevillian from the original Godspell; instead, he's the low-key leader of a New Age guitar mass who generates few sparks with sulky Judas, making the Resurrection-free finale anti-cathartic. But if you're seeking a family-friendly introduction to on-stage spirituality, Godspell is a better bet than Book of Mormon.