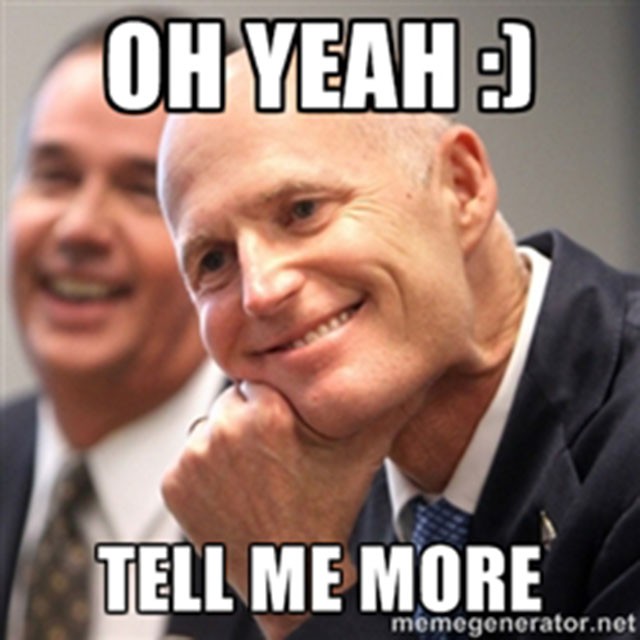 PROJECTED BUDGET SURPLUS FOR FLORIDA IN 2014

AMOUNT BY WHICH GOV. RICK SCOTT WANTS TO CUT TAXES IN FLORIDA UNDER HIS “IT’S YOUR MONEY” PROPOSAL

AMOUNT GOV. SCOTT IS PROPOSING IN SPENDING CUTS FOR THE STATE IN 2014, ACCORDING TO A WHITE PAPER ISSUED LAST WEEK

“IT LOOKS LIKE RICK SCOTT IS PAPERING OVER THE FACT THAT HE’S CUT MORE THAN $1 BILLION FROM EDUCATION, DOLED OUT TAXPAYER-FUNDED GIVEAWAYS TO BIG CORPORATIONS, AND HAS STOOD NEARLY SILENT ON THE NEED FOR EXPANDING ACCESS TO AFFORDABLE HEALTH CARE IN FLORIDA. THE PEOPLE OF FLORIDA WILL SEE THROUGH RICK SCOTT’S CAMPAIGN TACTICS.”
– FLORIDA HOUSE DEMOCRAT SPOKESMAN MARK HOLLIS
SOURCES: THE FLORIDA CURRENT, flgov.com

Last week, while nobody was giving a damn about him or his re-election because they were all sitting on their hands and waiting for blue-shirted Charlie Crist to announce his gubernatorial intentions – seriously, we saw Charlie in Orlando twice in a week and both times he remembered our name (totally running! For our hearts!) – Gov. Rick Scott issued a white paper. Yep, that’s right, a white paper. The significance of said flattened pulp is twofold: On the one hand, the continuing “It’s Your Money” propaganda piece (which cleverly replaces the “x” in “tax cuts” with a pair of scissors) for the first time indicated that the governor had no intentions of allowing state agencies to replenish their slashed operations with a projected budget surplus; on the other, it was a reminder that, though he’s vastly unpopular and hard to talk to, Gov. Scott makes tough decisions and hates government, so he’s totally running for governor again. It’s his money.

You might recall that the governor recently mounted a “listening tour” under the “It’s Your Money” banner at which he effectively entertained the notion that he would be cutting taxes by $500 million for rich people and businesses while pretending to, you know, listen to regular people. This latest release is basically a nudge to the legislature to let them know which way they should dart their eyes when it comes time to present a budget in the coming months. That darting, naturally, will be in the direction of public sector workers in state agencies, mostly by way of making those agencies chop off their own heads.

“Every agency should be able to find efficiencies. We’ll do the same thing: We’ll review every contract, we’ll look at office space, we’ll look at the services we buy, we’ll look at how we can help our employees become more efficient in what they do every day,” Scott told news website The Florida Current, adding, “Every investment has to be analyzed a little bit differently. So if it’s an economic incentive, we should get a return for our taxpayers; if it’s a road, it’s going to help us create more jobs; if it’s for an agency, it’s going to help us create more efficiencies,” nonsensically.

But that sort of colloquial kitchen-table cost-cutting logic doesn’t always work out for the betterment of Joe and Joanne Taxpayer. Last week, national watchdog group Good Jobs First released a report that highlighted, among other vaguely privatized state agencies across the country, Enterprise Florida, the corporate-incentive-making machine that has for nearly two decades failed to produce the jobs it has promised.

“Taxpayers are best served by experienced public-agency employees who are fully covered by ethics and conflicts laws, open records acts, and oversight by auditors and legislators,” the report read. And maybe not so much by agencies where, as the Orlando Sentinel reported, the CEO is about to get a raise from $230,000 a year to $275,000, with an added $100,000 in bonuses. Does that smell like efficiency?

Regardless, both Senate President Don Gaetz, R-Niceville, and House Speaker Will Weatherford, R-Wesley Chapel, appear to be falling right in line with the Governor’s alleged belt-tightening (but only for poor people), even though they have no idea what the governor has in mind yet.

“In general I believe it is always good fiscal policy to look for ways to make government more efficient,” beauhunk Weatherford grunted to The Florida Current. “It’s hard for me to comment on the governor’s budget until we see details, but I know he has the state’s best interest in mind as he governs.”