Grabbing life by the malts 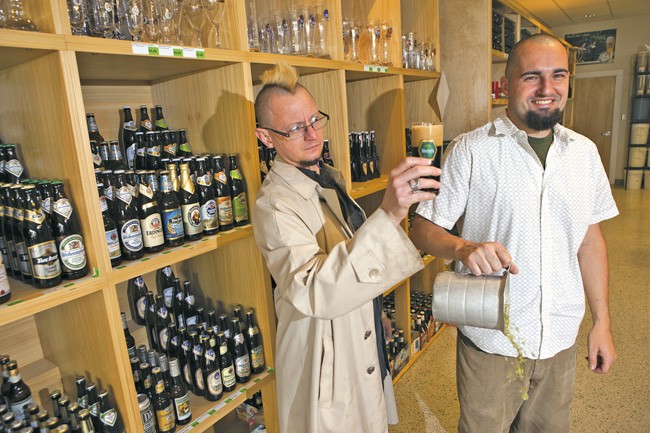 Standing in broad daylight at Sanford's Magnolia Square Market, I'm looking down at the beige, doughy malt extract in my hand. Under some different circumstance – say, loitering at a decrepit street corner around midnight – and in possession of this powdery-looking package, a policeofficer might insist I had some explaining to do. But Aaron Libera, co-owner of the Sanford Homebrew Shop in Magnolia Square Market, looks thoroughly nonchalant as he alphabetizes fresh green hops into a deli cooler a few yards away. Same goes for the shoppers hefting brew kettles and glass carboys and bushels of plastic tubing toward the register. They must pass barleys heaped in food-grade buckets to find the front door.

This isn't a clandestine black-market operation. This is beer, some assembly required, and everything one needs to brew it. And as many have come to discover, there can be as much fun in the making as the drinking.

Gary Holmes, co-owner of Sanford Homebrew (aka the Fermented Brew Shop), keeps his blond mohawk tall and his goatee twisted in an elastic band. He looks more like a soccer hooligan than a successful entrepreneur. But his and Libera's young enterprise fits perfectly beneath the banana-yellow awnings of Magnolia Square Market, couched in the historic district with other small shops and restaurants.

“And that's a direction people are taking in general these days,” Libera adds, “learning to bake their own bread, sew their own clothes. American families brewed their own beer for centuries. I think people are coming back to that now, looking at their favorite brands and thinking, ‘Why can't I make this myself? What's stopping me?'”

Some say life progresses in cycles. The economy merry-go-rounds through decades and political topographies; today's El Niño is tomorrow's La Niña. Beer – its consumption and its production – seems to have moved in a full circle, as well.

With a few stalwart exceptions like Yuengling in Pottsville, Pa., and the Boston Beer Co. (brewers of Sam Adams), the great American brewery has changed, if not dissolved entirely. Anheuser-Busch packed its bag for Belgium in 2008 after merging with foreign megabrewery InBev. Miller and Coors entered a joint venture in 2007, forming MillerCoors in order to stay in competition with InBev's massive product line. A heritage of domestic ownership was waived on the dotted line.

Despite seismic buyouts and mergers, America's beer darlings have suffered precipitous decline, according to economic analysis blog 24/7 Wall Street. The site looked at various consumer research databases to report that between 2006 to 2010, sales of Anheuser-Busch InBev's Budweiser – the “king of beers” – fell 30 percent, while its ultra-low-calorie kin, Bud Select, took a 60 percent hit over that same period. MillerCoors' Old Milwaukee and Milwaukee's Best, once flagships acquired from the now-defunct Pabst Brewing Co., sagged 52 percent and 53 percent, respectively. Miller Genuine Draft sales have dropped 51 percent, and Michelob got absolutely drubbed, eating a 72 percent loss over five years. But there is life after death for beer enthusiasts – those looking for an exciting alternative to the lagers marketed on television with busty women and barflies.

“Beginning in the '70s, people started to grow tired of fizzy yellow American lagers,” Holmes says. “They wanted something different.”

So beer people helped power legislation through Congress that decriminalized homebrewing for the first time since Prohibition. Homebrewers and microbreweries have pressed against the Big Three ever since.

The two men hold beer classes to wax poetic about brewing techniques and trade notes with customers. Their students drink the beer they like, whether a substantial brewery bottles it for them or not. And whereas entrepreneurs like Libera and Holmes sense business opportunity, most homebrewers produce with no commercial aspirations.

The hobby flourished on the West Coast during the '80s, where the first modern-day wave of microbreweries and homebrewing communities sprouted up. It has gained a stronger foothold in garages and kitchens throughout Central Florida thanks to stores like Sanford's Homebrew Shop, Heart's Homebrew Supply in College Park and various clubs and classes (see sidebar).

“Aaron and I never realized how many homebrewers were here in Orlando, isolated and unaware of the larger brewing community,” Holmes says. “I'm glad our shop can bring those brewers into the fold.”

Craft-beer nuts used to blot this city off the map as a wasteland, but no more. Redlight Redlight Beer Parlour has won international renown with its selection of rare brews, and plans to move into a new, larger space on Corrine Drive this summer; the recently opened Oblivion Taproom is close on its heels with its selection of out-of-the-way beers. Respected Orlando restaurateurs Jim and Julie Petrakis (chef-owners of the Ravenous Pig) plan an in-house brew operation at their upcoming Cask & Larder, embracing the brewpub business model that has become commonplace elsewhere in the country. Cask & Larder will be housed in the old Harper's Tavern space on Fairbanks Avenue, and the brewmaster will be Ron Raike, who has been crafting limited-edition brews down the way at Shipyard Emporium.

“There was a time you couldn't even find a Sam Adams here in Orlando,” Holmes says. “This city has grown up, and homebrewers played a large role in making that happen.”

To find a market where the little guy can revitalize an industry – from the comfort of his own home, no less – is rarer than plucking a fossil from limestone. It simply hardly ever happens today.

“What you're starting to see is a fascinating conversation between homebrewers and microbreweries,” Holmes says. “Homebrewers want good examples to model their beers after, and I think microbrewers are starting to cater to those needs. You really don't see that elsewhere.”

Dabbling with your first batch? Visit these homebrew hot spots to learn more: