Ever since last spring's lockdown, I've been slowly emerging from a cocoon of Zoom-based entertainment, and I've started sampling socially distanced in-person events. Just in the past few weeks, I've enjoyed a drive-through haunted experience, a drive-by dance performance, an outdoor backyard cabaret and several limited-capacity theme park shows. But until last weekend, I'd avoided attending any full-length productions inside a traditional theater. However, my stress from the drawn-out election demanded a distraction, so last weekend I overcame my anxiety about sharing air with strangers long enough to make my long-awaited return to Theater West End for the opening night of Green Day's American Idiot.

What made me change my mind? First and foremost, the material. I saw the original New York production of American Idiot on Sept. 11, 2011, and although I wasn't previously a huge fan of Green Day's 2004 concept album, seeing the show on that grim anniversary was a gripping emotional experience, from the title track's opening chords to the sing-along encore of "Time of Your Life."

I became mildly obsessed with the show and its pointed political message, which has only grown more relevant in recent years, and the hit-packed score that faithfully retains the original album's raw punk-rock energy. It was disappointing that the national tour never reached Orlando, so I was thrilled when Theater West End slated its regional premiere for last April.

Of course, the pandemic had other plans, but director Derek Critzer and producer Quinn Roberts worked tirelessly over recent weeks to bring their stage back to life. Originally, they planned to stage the show at Tuffy's Bottle Shop & Lounge, but when that plan fell through due to permitting issues, they scrambled at the 11th hour to transform their home venue so that the show could finally make its belated debut last Friday night. Knowing the effort they were putting in to make their stage safe (plus the fact that the play is only 90 minutes) gave me the courage to make the trek to Sanford and see for myself.

Critzer apologized to me as I entered for some minor items that were still unfinished, but you wouldn't guess there was any backstage chaos by looking at the beautifully redesigned theater. The rows of butt-numbing seats have all been removed and replaced with cabaret chairs and small cocktail tables. Each cluster of two or four seats is separated by a plexiglass barrier, providing at least the reassuring illusion of protection without ruining the sightlines of the three-quarter-thrust stage. Most important, masks are mandatory throughout the performance, not only for the audience, but also the actors (whose face coverings were coordinated with their costumes) and even the pit musicians perched in the corner. 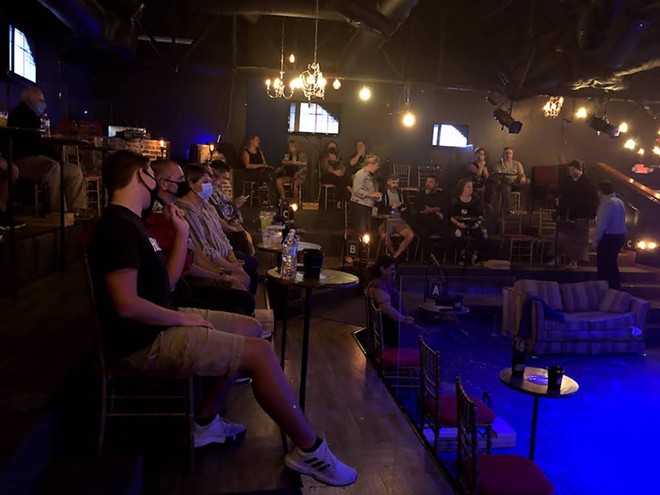 As far as plot goes, American Idiot is pretty bare-bones, with a book by composer Billie Joe Armstrong and Broadway director Michael Mayer that comprises barely two dozen lines of dialogue. Best friends Johnny (Claude Dylan Intriago-Godwin), Tunny (Phillip Edwards) and Will (Zachary Smith) want to escape from suburban Jingletown for a "Holiday" in the big city, but are pulled apart by drugs, war and parental obligations. Johnny, who fashions himself as the "Jesus of Suburbia," becomes trapped between his love for Whatshername (Iris Johnson) and his heroin addiction, embodied by the Sid Vicious-esque St. Jimmy (Forrest Stringfellow).

There's just enough storyline and character development for audiences to identify with these angsty millennials' existential despair, without pulling focus away from the powerhouse musical performances. After some initial opening-night awkwardness among the rhythm section, musical director Rebekah Piatt and her six fellow bandmates mostly nailed the score's complex tempo changes, and the large chorus' backup vocals blended beautifully on the songs "Boulevard of Broken Dreams" and "21 Guns," which came complete with heartbreaking string accompaniment. The leads may not articulate as crisply as the Broadway stars did, but John Gallagher Jr. and Tony Vincent didn't have to perform wearing face masks. I could understand at least half the lyrics, which is better than I can say about Billie Joe's recordings.

American Idiot's Broadway staging employed a towering wall of digital displays and spectacular flying effects, but I said in my original review that it would work just as well in a grungy warehouse. Theater West End's version largely proves me right, thanks to the intimacy of the environment and the enthusiastic passion of its youthful cast. And despite a limited budget, Critzer even managed to create a multiplicity of multimedia backdrops, beginning with a clever video prologue tracing the decline of American politics backward from Trump to George W. Bush.

It was energizing experiencing American Idiot among a live audience again, and with the precautions being taken I felt for myself that it was worth the risk to go. Of course, this wouldn't be a review if I didn't find something to nitpick. Like several other shows of Critzer's I've seen, his American Idiot is overstuffed with energy and movement, causing some subtle emotional moments to be overwhelmed by the sheer mass of bodies onstage. Michelle Alagna's choreography borrows elements from Steven Hoggett's pedestrian mosh-pit movements, but as delivered by a cast with widely differing dance abilities, it has an upbeat bouncy feel when it should be angrily driving downward.

However, after a year with minimal human contact, if the worst I can say about a show is that it suffers from an overabundance of life, then that is high praise indeed. Now, will someone please wake me up when 2020 ends?