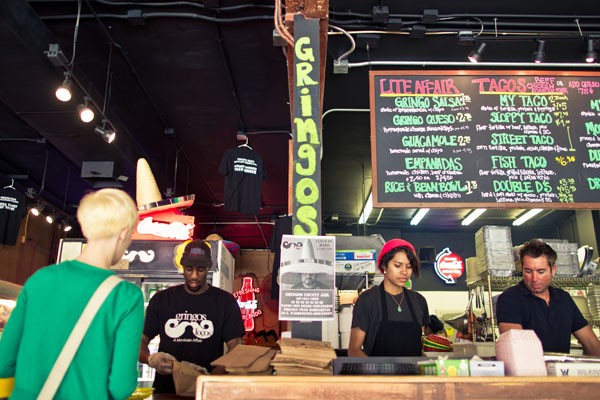 You have to admire a dining establishment with the balls to serve dishes with names like "Dirty Sanchez," "Double D's" and "Mouth Hugger." Monikers evoking poop, boobs and body fluids may not whet everyone's appetite, but they're right in the wheelhouse of the bibulous late-night reveler in search of drunk food at Gringos Locos. The grungy joint off Orange Avenue fills a need with its brand of not-too-south-of-the-border fare lubricated with a bit of innuendo. The setup here is nothing new - a long counter behind which grills sizzle and tacos, burritos and the like are prepped and stuffed - but the fact they're open until 3 a.m. is a boon for clubbers. Workers sport T-shirts with amusing sayings ("Winner winner taco dinner," "Pizza sucks, eat tacos" and, of course, "Free mustache rides"). We chuckled at the "Seriously, don't f**k my mom" bumper sticker affixed to the register and made a mental note to Netflix Cyrus (from which the quote is lifted). Coincidentally, we saw more than a few diners with frames resembling Jonah Hill's coming in and out of the joint - they may not be connoisseurs of gourmet cuisine, but they know a good deal when they see one.

The chimichanga ($5.75; $7.50 with meat) may have been free of a lascivious appellation, but given its sizable girth, "Fat Ricardo" would've been appropriate. The queso-messed chimi was particularly pleasing and had me wishing I was sloshed so that I could fully enjoy it. Drunk or sober, the fish tacos ($4.50 for two) with dry, chewy tilapia had no redeeming qualities, though if you happen to be juiced, fish is probably the last thing you'd want to ingest anyway. The "1 Night Slam" ($6.95), another alcohol sponge, is a sort of pre-breakfast burrito with plenty of eggs, chicken and rice. A previous rendition had chorizo and beans in place of the chicken and rice; I'm not sure why the burrito was altered for fowl mouths. Empanadas ($2.50), handmade and fried on-site, were surprisingly good and rivaled ones served at more "authentic" Latin eateries. Red and yellow squeeze bottles on the tables provided the only hot sauce options, and therein lies a glaring need at Gringos Locos: Where's the salsa bar? I understand that a bunch of drunks would likely make an epic mess of one, but at least have some hot sauce bottles for those who like it hot. The bland, slightly astringent guacamole ($2.75) was a true failure in every aspect. Really, it's not hard to make a decent guacamole, and the recipe for this side/starter needs to be remedied.

In keeping with the ambience, grunge music was piped throughout the taqueria, and the Southwest motif gave it the feel of a dive bar in Austin. The joint will be packed come Cinco de Mayo, but Gringos Locos does a fairly brisk lunchtime business as well. Owners Rob Bair and Jay Clark may be a couple of gringos, but let's give the duo credit - they're not so loco they don't know that when the economy hands restaurateurs a Tijuana Steamer, fast-casual eateries should be quick to counter with a Donkey Punch.