Pho and more at a familiar space with a new face 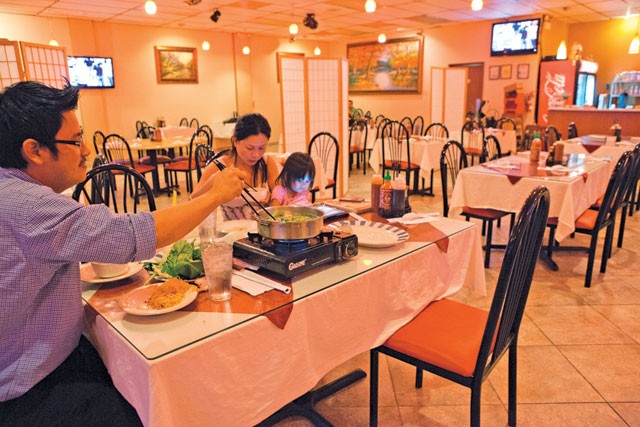 When the owners of the longstanding Vinh's Restaurant sold shop and opened Pho Vinh in the old 4-5-6 Chinese Restaurant space a few blocks down on Primrose Drive, it took four years for the new owners of the Colonial Drive site to change the marquee from "Vinh's" to "Ha Long Bistro." Why the delay in changing the name? Therein lies the answer. They take Ha Long time. Oh my, yes!

Actually, that's not true at all – quite the opposite, in fact. I remarked to my dining comrades that our appetizers arrived in lightning-quick time. Of note was the fried squid ($10.95), airy, crisp and liberally flecked with black pepper – which, I was told, is more the custom in chili-deprived North Vietnam than the central and southern parts of the country. From Hanoi to Ho Chi Minh City, the Vietnamese enjoy a good summer roll ($2.95), and we relished the fresh snap of these corpulent shrimp-and-pork-filled cylinders almost as much as we did the roasted quail ($7.95). Tearing into the dark flesh of these little birds after repeated dips into a tangy mixture of lime juice, white pepper and salt was, without question, one of our favorite 'Nam noshes.

We rolled the proverbial dark-meat dice and came up sevens with the duck soup ($8.50). Granted, the meat didn't exactly fall off the bone, thereby increasing the degree of difficulty in eating the dish, but good things come to those who gnaw. In this case, a bone in the mouth was worth the post-meal tooth-picking. Like the duck soup, the pho tai ($7.50) had its complexities, particularly the rice noodles. The enormous mound sitting at the bottom of the bowl was far too sticky and dense, and wound up disintegrating into slivers when poked and prodded with chopsticks. But after a lime squeeze and a healthy layering of add-on garnishes – raw sprouts, cabbage, jalapeños, Thai basil and mint – the whole concoction washed the palate in a fragrant and sensual bath.

The platter of crispy pan-fried egg noodles with stir-fried chicken and veggies ($12.95) was large enough to feed two, possibly three people. Not a bad dish, but the fishy-tasting chicken certainly didn't qualify it as memorable. (For noodles, Tasty Wok across the street still rules.) The fresh stir-fried squid and shrimp in the tomato-sauced tôm muc xào chua ngàt ($13.95) stood out, and the portion was far more suitable.

A couple of beverages – one a dessert, the other coffee-based – served as cappers to our meal. The former, called "rainbow" ($3.50), featured strands of gelatin, red and green beans, shaved ice and coconut milk. The sweet drink was reminiscent of Indonesian es teler, just not as good. The latter beverage, Phin-filtered Vietnamese coffee ($3), was heart-joltingly intense and sweet thanks to two tablespoons of sweetened condensed milk. If you've got a death wish, add more condensed milk, and if you're not sure how to use the filter, ask one of the good-natured servers. The coffee's potency helped keep me awake to write these very words and that, dear reader, is the long and short of it.