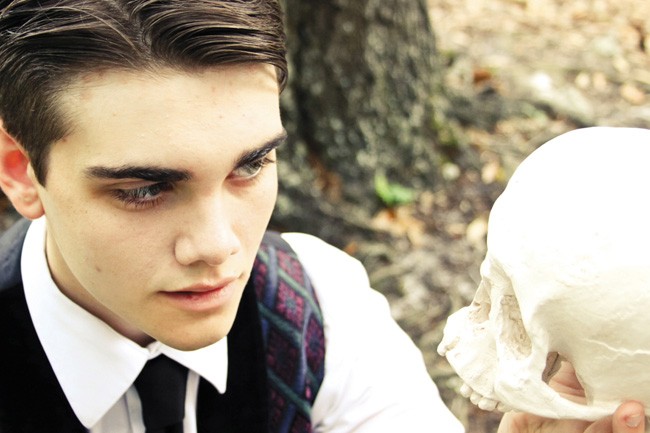 When discussing the Bard with those who have never seen a Shakespeare production or read his plays, I cite Hamlet as the one every human being should see or read before they die. Unfortunately, the new production by fledgling local theater company In the Wings of Shakespeare's three-hour tour de force isn't the one by which to judge the work. Something is rotten at the Studio Theatre.

Director Jeremy Seghers sets his version in 1920s West Virginia, in the months leading up to the coal miners' massacre at Matewan that resulted in 10 deaths and, eventually, miners' rights reform legislation in the 1930s. It's an ambitious creative choice, but aside from the abundance of bearded and bib-overalled cast members – and Seghers' choice to employ a distracting and uneven Virginia accent – the historical details are lost. The audience is left wondering why these Appalachian characters are so concerned with political matters in Scandinavia.

The cast's sheer inexperience with classical works contributes most of the blows to this production, which struggles from the moment Hamlet's father's ghost appears in Act One until Fortinbras storms the castle in the last scene. If one has never performed Shakespeare before, and it appears from the program bios most of the cast hadn't, Hamlet isn't the place to start.

At times, actors stood in one place and, with scant help from the starkly minimalist set and few props, simply recited their lines. As it is, most of the characters in Hamlet undergo little transformation throughout the play, with the exception of the title character; his love, Ophelia; and his mother, the queen, all of whom succumb to a kind of madness. To see the other characters remain onstage, seemingly emotionless, felt awkward and amateurish.

Individual performances ranged from painful to fluid, the latter exemplified best by Brett P. Carson, whose Foghorn Leghorn version of Polonius provided at least a little comic relief. Anthony Pyatt Jr.'s portrayal of the melancholy young prince was fine enough, displaying a range of emotion adequate to keep the audience anticipating what might spring forth from Hamlet's addled brain next. In a way, Landon Price's smarmy Southern-gentleman version of the villainous King Claudius worked well, though when I searched his face for some recognition of the situation's gravity, I saw nothing but a blank stare between lines.

Seghers' rendering of the most masterful of Shakespeare's works would have benefited from some more thoughtful directorial decisions – ditching the setting and accent; making some well-considered cuts in the text; giving the actors something to do while they're onstage other than slog through speeches. Hamlet is a work that's intensely nuanced and largely philosophical, not driven by action and stage combat. After seeing this production, it's clear it's not for those without the experience to make the text come alive.