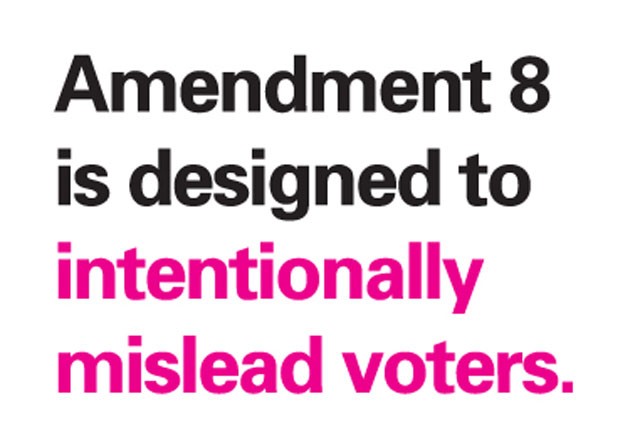 Speaking of ballot initiatives, let's touch briefly on one that will most certainly be on the ballot in November and is also designed to intentionally mislead voters. This one is a state measure that hopes to fool voters into supporting something they might actually be fundamentally opposed to.

Voters will be asked whether they support Amendment 8, the so-called "religious freedom" constitutional amendment, which states that "No individual or entity may be denied, on the basis of religious identity or belief, governmental benefits, funding or other support, except as required by the First Amendment of the United States Constitution." Sounds pretty benign, right? Well it's not. This amendment has nothing to do with the First Amendment, and those who support it know it.

Amendment 8 would actually eliminate a provision in the state constitution that keeps public funds from being used to subsidize religious institutions – you know, separation of church and state and all that. That provision currently reads: "No revenue of the state or any political subdivision or agency thereof shall ever be taken from the public treasury directly or indirectly in aid of any church, sect or religious denomination or in aid of any sectarian institution." If Amendment 8 were passed, that phrase would be replaced with language that would make it possible to do exactly that, and it'd be done in the name of "religious freedom." Not only would it ensure that public funds be available to churches and religious organizations – it'd make it illegal for a public entity to deny the funds to them.

This isn't a new amendment, either. In 2011, it was introduced as Amendment 7, and it was challenged in court by the Florida Education Association, which called it an "underhanded attempt to legalize state tuition vouchers for private schools, including church-affiliated schools." A court sided with the FEA and said that the ballot language was intentionally misleading and tried to erroneously imply that the measure would bring Florida's constitution in line with the U.S. Constitution.

Not to be undone by the courts, state Attorney General Pam Bondi took advantage of a law that allows the state AG to rewrite the descriptions of ballot-initiative summaries when the Florida Supreme Court removes them. Bondi rewrote the initiative, resubmitted it and – tada! – now it's back in play for November.

So when you go to the polls in November, don't forget – a vote for Amendment 8 is a vote to require that the state embark on a tithing program.