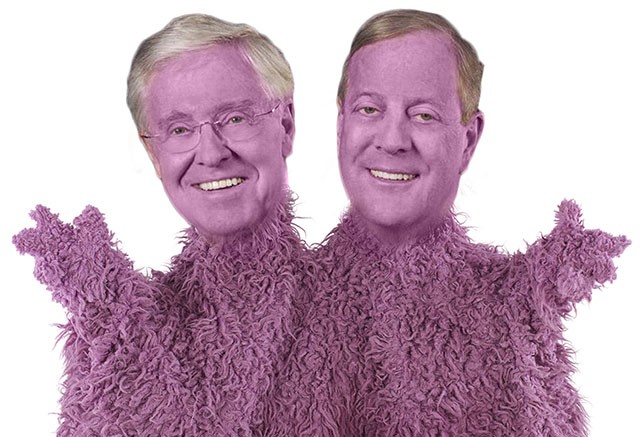 Just one day after an estimated 300 union members and other activists stormed the Los Angeles headquarters of Oaktree Capital Management in protest of that firm’s 20 percent stake in a potential deal that could sell the Los Angeles Times to free-market (at whatever cost) enthusiasts the Koch brothers, a gaggle of about 30 activists protested outside the Orlando Sentinel headquarters on May 16 with a similar message. “Things go better without Koch,” tag-lined one Sharpie-d poster (another warned of a coming “#kochtapus,” should the conservative billionaires get all eight of the Tribune Co.’s properties in an expected bidding war).

The main difference between the two protests – other than size – was that the California iteration was actually applying pressure to the city council to divest its pension monies from any funding groups associated with the sale, while the Orlando contingent didn’t really have that kind of union pull. It was more of a honk-if-you-will-cancel-your-subscription affair meant to “raise awareness,” said Florida Watch Action executive director Amy Ritter. If the Sentinel goes to the Kochs, “you’re going to lose readers,” she added. Affiliated organizers at Progress Florida are planning on participating in a national day of action on May 30, and have already been distributing petitions online and otherwise.

But the most interesting part of Thursday’s action wasn’t the obvious disgust at just what a Tea Party Tribune would look like as conjured from the conjoined money-heads of Charles and David Koch; it was a real journalistic dust-up that happened just to the side.

Flanked by the rest of our Sentinel boyfriend squad, David Damron and Mark Schlueb, name-taker Scott Maxwell fielded an intrusion from noted Tea Party blogger Tom Tillison and his jean shorts. Tillison, who now writes for some conservative conundrum called the BizPac Review, tested his Andrew Breitbart chops and attempted a filmed confrontation with the affable columnist. Maxwell wasn’t having it.

Asked if he would go on record about the potential journo-deal, Maxwell first asked Tillison to identify himself. He stuttered, tried to just call himself a blogger, then admitted that he was indeed Tea Party Tom from the seventh rung of hell. Maxwell, without breaking his signature “aw shucks” smile, proceeded to dress down Tillison, questioning his “moral compass” and documented “trouble with the facts.” Tillison, who has no emotion, showed no emotion.

But he did run home to write about it! “Orlando Sentinel’s Scott Maxwell: Rude, radical and unprofessional” was the headline that came up on Friday morning’s BizPac feed. “Hell-bent on establishing his superiority over me and perhaps impressing his far-left following, Maxwell chose to insult me for being ‘cowardly’ because I didn’t offer my name up front,” Tillison’s typing fingers shook. Poor dear.

Somebody slyly remarked that should the Koch deal go through, Tillison might actually be the new Maxwell. Judging by his meager performance, we highly doubt it.