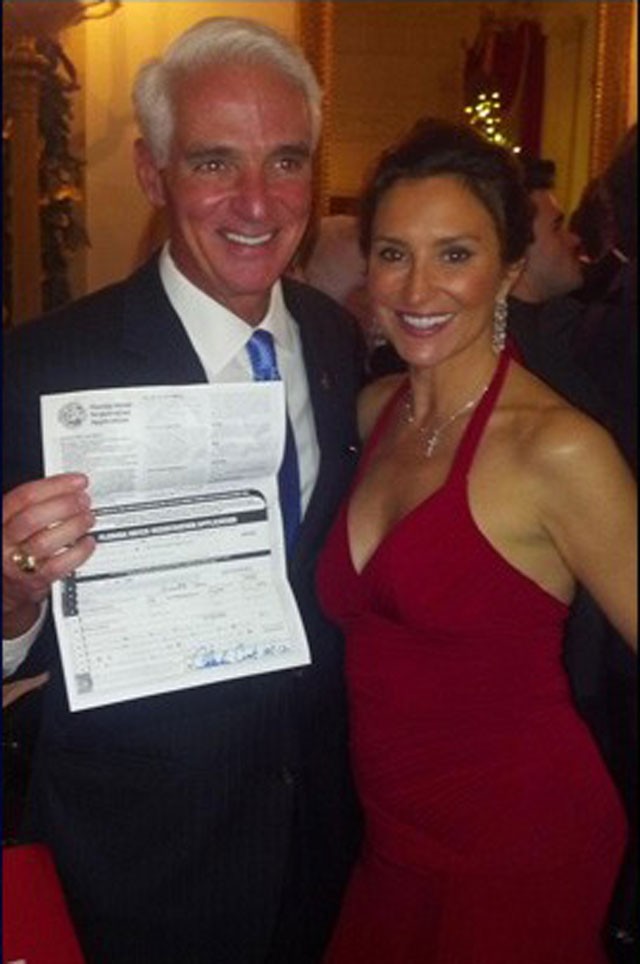 Lock up your livers! It's awkward holiday party overstatement time! If your fragrant and flagrant swishes through professional ass-grabbing by the punchbowl are the stuff of tomorrow's regrets and demotions, you can only imagine how it must feel to be party-hopping former Gov. Charlie Crist. The self-tanning silver fox obviously had something on his mind while stumbling around a White House holiday soiree on Thursday night, and all it would take was a splash of liquid courage, a Twitter account and hopes of a presidential fist-bump to seal the deal. And, poof (or bump)! Just like that, Crist pulled out the papers and made it official. Cushioned by press-ready proclamations of "the Republican party left me," the former people's governor became a living, breathing Democrat probably running for governor again. Cue the shock and horror!

Actually, there was little shock and only muted horror. Some party machinations come with preconceived annotations, and this seemingly blasphemous party conversion certainly fits that bill. Having spent the better part of his post-Senate-run failure as a likable lapdog to Democratic fundhound John "For the People" Morgan, thereby remaining in the public eye via a series of television commercials saying absolutely nothing, Crist's evolution has been more than just televised. His "wife" became a Democrat in 2011; he's already leading the hypothetical poll circuit for the likely Democratic nod in the 2014 gubernatorial stakes; he freakin' spoke at the Democratic National Convention in September. That elephant ate the room a long time ago.

But if the leftward shift didn't exactly drop jaws, neither has it really inspired sweet, progressive coos. Though typically friendly to the left when it came time for the veto pen on a legislature run amok, the former Jeb Bush Republican (or Ronald Reagan Republican, depending on which rotating fan you caught him standing in front of) comes pre-equipped with the sound of opportunism knocking. The "all politicians are self-serving turncoats" argument has rarely found so convincing a piece of evidence. We get what we pay for.

Still, the significance of a Democratic Crist run, especially launched now, shouldn't get lost in the reflexive huffs and puffs of partisan bickering. Many weren't sure what Crist would do leading up to February's anticipated legal unraveling of the Jim Greer/Republican Party of Florida hookers-and-blow scandal. Crist's been dutifully distancing himself from the mess, but as the de facto buck-stopper of all things RPOF during his tenure, the political baggage may become too much to escape. The always tasteful RPOF has been savaging Crist for the latter part of the year (hilarious Titanic memes with Greer included) in a ramp-up to the ramp-up to the ramp-up of the forever-away election. Why? Because he's a liar!

"Bring it on!" a Republican committeeman recently enthused, according to the Associated Press. "That man sat at my house, in my kitchen, at my breakfast table and told me he was a Ronald Reagan Republican. OK, I'm putting my boots on, because guess what? You lied to me." Boots!

Meanwhile, among other Democrats shortlisted for the gubernatorial gunnysack race, only last time's failure, Alex Sink, has acknowledged the Crist conundrum, and even that was with a tepid "in it to win it" (regardless of Crist) comment on a Tampa television show over the weekend. Our own buddy, Mayor Buddy Dyer – who notoriously told us to our faces during this year's local mayoral election that he would not be running for governor – has yet to publicly opine, but we can only imagine hizzoner would toe the same middling line. So, going on the sounds of the names alone, it indeed seems that, while it's Dyer to Sink, Crist sometimes rises – especially during the drunken holidays. Merry Crist-mas.