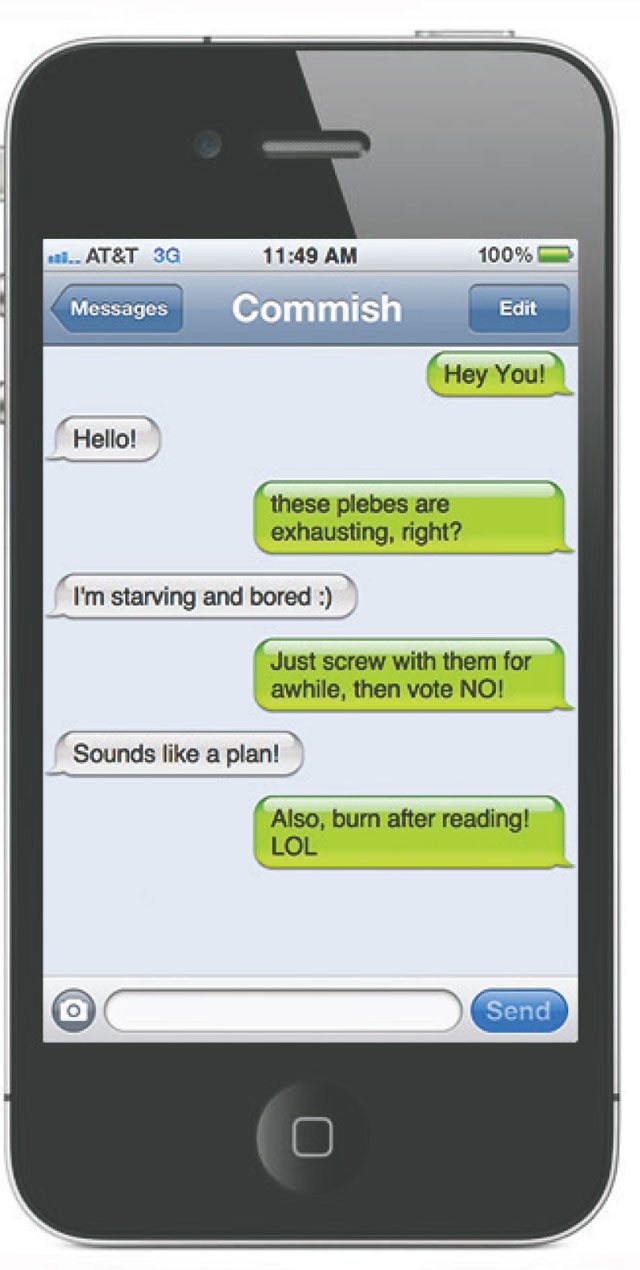 For a hot minute there, it seemed like the line had gone dead on the explosive game of litigious telephone going on between Orange County and the sick-time-seeking activists at Citizens for a Greater Orange County. You'll remember that things got brilliantly nasty toward the end of last summer, as it became apparent that county commissioners were doing the text-happy bidding of lobbyists when they put the kibosh on the earned sick-time initiative during at the board's Sept. 11 meeting. You'll also recall that, for reasons known only to themselves, certain commissioners thought that they were being clever by erasing messages from their technological chatterboxes because, you know, everybody is always scrubbing their text queues lest things start to look messy – especially when some of that mess is pesky public records.

Well, on Nov. 29, on the 18th floor of the Orange County Courthouse, the dormant issue of just why the county continued to hold onto those public records (despite numerous requests by the activists to get their paws on them) was resuscitated in a case-management conference hearing that, though boring by design, illuminated some interesting developments in the case. It also showed a county legal team that didn't really seem to know what it was doing, much less how to work a cell phone.

County attorney Mason Grower, who has a way of appearing constantly taken aback by the suggestion that the county may have done anything wrong, referred to himself as "electronically challenged" before describing the current state of affairs in the county's internal investigation as "a vast matrix" of non-standardized feeble attempts at coming clean. Some of the commissioners are downloading stuff via third-party apps and putting the info on thumb drives for review; others are submitting theirs to a company called Navigant (one is saying that they want to use their own cash to pay for it, "for legal reasons"); some are trusting the county's ISS department; and one unnamed "she," whom Grower would not identify, is refusing altogether (we're hearing it's Tiffany Moore Russell).  "I'm not trying to obfuscate or hide," Grower half-hearted toward the end.

Citizens' attorney Thomas Shults wasn't really buying it, referring to the matrix silliness as "a spiderweb of devices being delivered to who knows who and who knows where," and warned that if the devices – of which he counts 18, including personal devices of commissioners with public records on them – are not seized soon enough, the deleted records currently buried in their whiz-bangs could disappear forever.

"At a minimum, the county must do its legal duty and take possession of all public records no matter where they are stored, especially if the records are in the possession of a county officer or employee," Shults said in a statement that afternoon. "The fact that this still has not occurred after nearly three months is inexcusable. No commissioner is above the law."

Maybe, but the county sure does seem annoyed at the idea that this could lead to personal stuff getting out there – you know, like when the county itself sent out loads of personal messages from Mayor Teresa Jacobs' own phone and then acted like it was everybody else's fault for looking at them. Busybodies!

The judge wasn't having any of the grumpy back and forth, really, because all he signed up for was the case-management scheduling crap, including setting a time to hear from the attorneys of the lobbyists to explain just why it is they were so adamant about not being deposed like they were subpoenaed to be. Are they above the law? Probably.

Anyway, the whole thing will continue to itch inside of our ears until at least June 10, when the judge scheduled the big trial (with several hearings clouding the docket until that summer peak). Meanwhile, we'll start using our electronic devices for what they were meant to be used: sexting while sick!