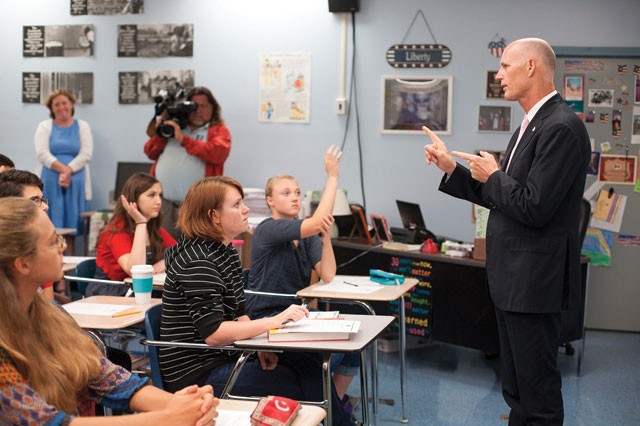 In what can best be described as a spectacularly soundproofed case of a bald tree falling in the educational woods, Governor Rick "Dick" Scott slithered his way to within a half-mile of Happytown™ HQ last Thursday to hiss into the ether, and we were there! By now, you've probably exhausted your eyes, rolling them at the notion of Scott's so-called "listening tour" that took the state by surprise last week – you know, the photo-op posturing parade that was meant to make it look like Scott actually gave a damn about public education, with no sound and no fury signifying everything. But your thoughts on the matter were not requested. Why? You're not smarter than a fifth grader.

Anyway, Scott made a stop at B-rated, generally impoverished Fern Creek Elementary School. We arrived after the governor heard the complaints of exhaustion from teachers, just in time to watch the throng of television reporters hurl an array of topical questions at the slippery gubernatorial wall. Wouldn't the passage of "smart cap" Amendment 3 limiting government surpluses potentially hurt already dwindling teacher salaries? That's for the voters to decide, etc., he says. Then, the ever-ready "last question" call of his media handler was handed to our boyfriend Scott Maxwell from the Sentinel. "How does no more 'teaching to the test' manifest itself in your idea?" Maxwell asked in reference to the FCAT stranglehold currently maligning teachers, students and parents alike. The answer: something like, duh, we're taking too many tests. OK.

The rest of the event consisted of Scott and his wife sitting on a couch in the media center and reading a children's tome titled How Full Is Your Bucket? For Kids (very!) while sitting beneath a banner that touted the governor's $1 billion contribution to education that basically didn't make up for the previous year's $1.3 billion in education cuts. Math is hard!

Scott greeted each tousled-haired member of the gathered assortment of first-through-third-graders from a squatting position, offering such lively chatter as "Are you ticklish? I bet you are!" and "Do you get nervous? My leg shakes. I'm ready to go all the time!" before cracking open the slight hardcover that's meant to teach the youth about kindness and generosity. Irony was not invited. In between the turning of pages, the governor engaged the kids in various back-and-forths about sibling rivalry and being the new kid, sounding way more comfortable at the Weekly Reader end of the communication spectrum than the executive level he currently occupies. At the end, Mr. and Mrs. Scott invited all of the kids to come for a tour of the "mansion" with the "mansion dog" the next time they're visiting Tallahassee.

"My mom's broke," one girl blurted.

"Well, I guess it will have to wait, then," Scott replied, charmingly.

And then it happened. Somehow Scott's media handler felt sympathy for us and our tiny recorder and asked if we needed to get some "audio" from the governor. Why, yes! So, after some photos and some squirms, the man himself writhed his way over, hand extended. "I have a brother named Billy," he said. Gulp.

"Governor, in one ear we've been hearing a lot about potential closings of several local public elementary schools, and in the other, we're getting a lot of static about privatization and virtual schools, you know, like K12, Bill Bennett's multimillion dollar virtual venture that's currently under investigation by the state," we spoke very softly. "How do you reconcile these two harrowing scenarios under the banner of your $1 billion gift to education?"

"The $1 billion would go to the school districts, and so they decide where the dollars go. They would then divide the dollars between them and, you know, the Florida Virtual Schools," he said. "If a student would be going to a local school part of the time, part of the money would go there. Almost all the decisions would be made at the local level, at the district level. So Orange County would have a different decision to make. As you probably know, there's an elected board."

Erm, yeah. So, more to the point, what do you make of the fraud allegations being levied against virtual schools right now, specifically K12?

"My understanding is they're going to be looking at that. We have to wait until we get more information," he said.

And with that, our bucket overflowed with something that didn't smell much like generosity or kindness.

Speaking of education and that s(t)inking feeling, the pixelated allure of high-tech dream jobs that led the state legislature to animate $20 million in the direction of Titanic director James Cameron's Digital Domain Media Group Inc. – in the simulated hopes of 500 superhero occupations coming to the state – smashed into a bankruptcy iceberg last week, and this time it was real. Though not necessarily unexpected – according to the Tampa Bay Times, Florida has been a carpetbagger's heaven for big-eyed incentive seekers, with the state doling out some $739 million between 1995 and 2011 in order to secure more than 86,000 jobs that probably don't exist anymore – the crash of Digital Domain has widespread implications. National Public Radio's State Impact reporting project reports that the animation company was partnered with Florida State University for its new $28,000-a-year Bachelor of Fine Arts film school program, wherein students would spend their freshman year in Tallahassee before relocating to beautiful Port St. Lucie where Digital Domain is (or was? As of press time, there were still a few employees) headquartered. For its part, FSU has vowed to continue its program with or without Digital Domain – Frank Patterson, the dean of the College of Motion Picture Arts, says that they, uh, knew this could happen.

"Anytime you go into a collaboration like this, you have to be prepared to continue if your collaborator fails," he told NPR.

But in the big, real picture, the loss only serves to illustrate how potentially irresponsible the legislature and the governor's office have been with these bloated incentives.

"Of course, 100 percent of all new businesses are not going to be successful," Sen. Nancy Detert, R-Venice, told the Times. "There's something worse than not having a job … that's having one and losing one, and having the taxpayers chip in for that disaster."

Meanwhile, this disaster is currently being investigated by the state at the behest of Gov. Scott, who seems reticent about throwing money at the childlike creations of geeky animators. Maybe he's better off sticking to still-form books about buckets. After all, we wouldn't want to make his legs shake anymore than they already are.