Sad-song saga of the gold-plated Dr. Phillips Center for the Performing Arts 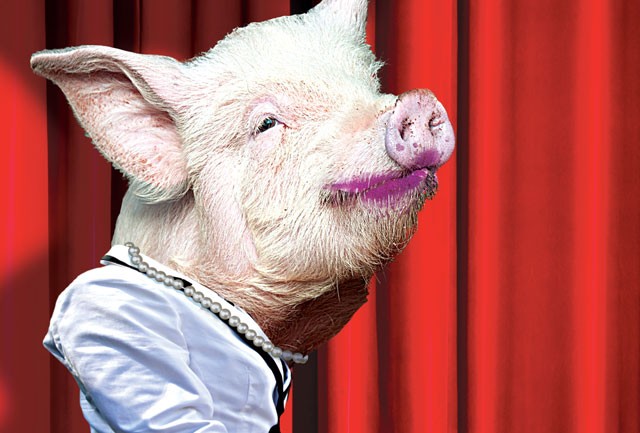 So, how did all of that work out for you? Are you covered in bliss and diamonds and optimism about the future, thanks to the good tidings and philanthropy that come with that special time of year that you just endured (or are still enduring)? Well, at least for us, there are some gifts that just keep on giving and, although they do involve philanthropy (or the apparent absence thereof) and plenty of diamonds, the bliss has never really been a factor. Yes, we're speaking of the continuing sad-song saga of the gold-plated Dr. Phillips Center for the Performing Arts, because that's what we like to do most when shaking our fists at City Hall. Also, it looks like we'll be speaking of it quite a bit in the coming year, because shit is now starting to get real.

Following a sad live-cam year of cranes and girders – seriously, most press-friendly features about the gaping construction site this year have amounted to "Look! A truss!" distractions from standard games of watching a pot of water boil – something happened on the way to the theater last week. And that something, dare we say it, sounds a lot like an invitation to an "I told you so!" chest-beating explosion. If you didn't think DPAC was, at best, a rickety shack being sold with fundraising "circles" and false bravado (bad intentions included), then you hardly know us.

News broke via the Sentinel on Dec. 19 that the vaunted DPAC board had finally made the decision that it would not be needing the services of Florida Theatrical Association in presenting the only thing that the theater is going to be able to present – Broadway shows (because the acoustic hall for the Orlando Philharmonic and Orlando Ballet is still something of a pipe dream). Instead, DPAC was going to take on the task of self-presenting, thank you very much. That way they'll save up $700,000 annually, according to official estimates referenced in the Sentinel story but probably drummed up by a paid consultant. "Every dollar we can save is a dollar we don't have to go out and raise," stoic DPAC board chairman Jim Pugh said. That's pretty sad coming from an organization which reportedly still needs $75 million to move ahead with its promised second stage (meaning the board has raised squat since the last time we talked about them).

Speaking of talking about them, we already predicted this self-presenting predicament nearly three years ago ("Keeping up appearances," March 24, 2010). Back then, when she still talked to us, DPAC president Kathy Ramsberger blankly called Florida Theatrical a "choice" while rambling out of the other side of her mouth about self-presenting being the only way that the performing arts center could sustain itself. At that time, Florida Theatrical president and chief executive officer Ron Legler responded to the assertion thusly: "I don't think she should be in the business of hurting local arts groups. It shouldn't be the goal to take out a major local arts organization."

But that's exactly what they'll be doing, and the news has galvanized the arts community in a public fashion on Facebook, with many writing treatises of dismay at the decision. Doesn't sound like good news for fundraising, does it? Well, naturally, Ramsberger is chewing back. In a Dec. 20 internal email obtained by Happytown™ – one that begins, beguilingly, with the greeting "Dear Circle Friends" – Ramsberger makes the case that DPAC has nothing to worry about and is planning "an excellent 2014/2015 opening season" with the help of former Straz Center for the Arts vice president of programming Judy Joseph, who will be coming here from Tampa Bay. Of course, anybody who's anyone in Broadway circles knows that Joseph's success at Straz probably had more to do with Straz Center president Judith Lisi – a grand dame in the industry who herself cautiously told us in 2010 that opening a new center was "very, very difficult." Also, Lisi said, it involved engaging the community in a meaningful manner. So far, DPAC has only confused the local arts groups – or virtually shut them down – which isn't exactly engaging.

Still, writes Ramsberger, now is not the time for tears. "Finally, your role as a Circle member is to help with friend-raising and fundraising; therefore, I'd like to ask you to invite prospects and potential business partners to tour the site." There will be a DPAC "team" there to help shake their pockets, so no worries ­– or all worries? We're building a mystery.

In much lighter performance news, we were invited to emcee the Central Florida Jobs With Justice Third Annual Power to the People celebration on Dec. 20, and we were awesome. Actually, it wasn't us, but the general greatness of the activists and advocates crowding the Venue that made the evening shine. The event is loosely an art show – a silent auction for pieces created in the spirit of activism was held in the lobby, with proceeds benefiting the cause – but mostly it's a chance to recognize people who have fought the good fight for the working class over the last year. A couple of women who walked out on their jobs at Walmart (one did so with Congressman Alan Grayson, even!) told their stories, and a student who fought for the DREAM Act through personal revelation was lauded by her university professor beautifully.

But let's not kid ourselves: The real highlight of the night was the "Scrooge of the Year" award presentation, a funny bit of crowdsourcing that encouraged people to buy votes for their least favorite public figure, because, you know, Citizens United. Anyway, the night's big winner was crazy-texter Orange County Mayor Teresa Jacobs, thanks to the efforts of Citizens for a Greater Orange County and Organize Now taking on the mayor litigiously for apparent (if virtual) violations of public records law. Those behind the earned sick time campaign and its subsequent legal battle were presented with a golden bullhorn, which almost immediately broke in half. Guess it's time to get a cellphone!