The week that the county and the city made (fake) nice, rail made more racket and justice took a markdown. 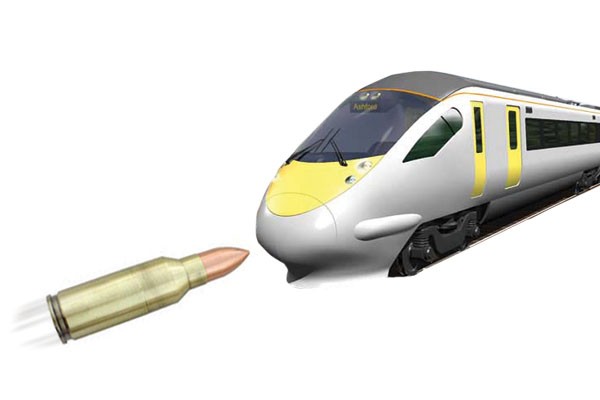 We were promised a fight. With all of the behind-the-scenes municipal machinations surrounding the failing premise of the Dr. Phillips Center for the Performing Arts project (again!), our hopes were high up in the bleachers - and smoking - for the quarterly DPAC board meeting on Feb. 24. Newly minted Orange County Mayor Teresa Jacobs had already pulled the gloves off and set the Jell-O in the ring when she sucker punched the city with 12 glorious pages of invective on Feb. 10 regarding the shady dealings of the city and its DPAC sister. Free lunches! Free cars! No money! Orlando Mayor Buddy Dyer was reported to have been "blindsided" by Jacobs' attack. DPAC princess Kathy Ramsberger, from the Land of Havesalot, was being tightly circled by the booster wagons, all leather-lined to protect her from the shit that was flying directly toward her face. This was going  to be epic.

Except it wasn't. And maybe it was never going to be. See, there was always something fishy about the push-and-pull between the county and it's bratty city sister, some scripted Krystle and Alexis nonsense made for ornate studio-lot swimming pools and suspended disbelief. In fact, we're starting to wonder if this whole mess is about a theater or is a theater.

So it was when Jacobs was wheeled out with Dyer and DPAC board Chairman Jim Pugh Jr. last Wednesday for a hastily assembled, pre-board-meeting presser to discuss the salvation of DPAC by means of yet another nonprofit, the Community Construction Corporation (or basically, some rich people, Disney and the Orlando Magic), which intends to provide some phantom oversight to the construction end of the proceedings. Wait, all that righteous indignation was just acting?

Dyer potatoed his way out first to applaud the "collective community spirit" and apologize for Jacobs being "thrust into a difficult situation" so early in her reign. Then Jacobs was all, "Mayor Dyer is absolutely right," referring to some of the "open to interpretation" contractual language she spit venom at two weeks prior. Dyer was all, "We hope to break ground this spring." Jacobs was all, "I'm pretty sure we'll get the answers we need soon." And Pugh grumbled his way in just so that he could call Jacobs "my new best friend." Sickening.

Reality check: DPAC has so far not been able to provide any operating figures after six years of filing its nails over it, and the project will not break ground this spring. The city is now promising to make an additional $30 million appear out of nowhere (or your pocket).

We got up the gumption to poke one question in Dyer's direction, hoping to start a fight ourselves, and it almost worked. When prodded about whether this new semi-corporate olive branch collective might in any way affect the local arts component - or phase two of the project - Dyer shot spite through his eyes and teeth in our direction, mumbling something about "financial viability." It is on, bitches!

Anyway, the unspoken factor through most of the charade, Lady Ramsberger, was eventually spoken of by a TV reporter, an act that made her literally materialize out of thin air (or from behind a concealing DPAC placard). Did she feel like she was still cut out for this job?

"Yes," her eyes blinked like so many  headlight deer before her.

"She has the full confidence of our board," Pugh added, puffing his chest a little at any suggestion otherwise.

In related news: Wrestling is fake.

Speaking of losing battles, on  the evening of Feb. 23 about 50 people gathered along the western edge of Lake Eola Park to protest Rick Scott's decision to forego $2.4 billion dollars in federal funding for a high-speed rail system that would connect Orlando and Tampa by 2014. After loitering at the intersection of Washington Street and Rosalind Avenue for about 45 minutes, the protestors - a mix of young professionals and professional activists - went on an impromptu march toward Orange Avenue, demanding that they be given The Rail, now.

The protest came in the middle of the supposed do-or-die week during which a federal deadline loomed over the rail's backers to come up with a Plan B, lest the high-speed rail money be given to another state. Early in the week there was the continued stewing and obsessing over the question of whether Scott's rejection was actually legal; State Senator David Simmons, R-Altamonte Springs, backed away from his prior suggestion of a lawsuit against the governor, perhaps knowing the Scott had plenty of other cards up his sleeve to kill high-speed rail, such as, say, firing the people associated with the project. Despite intense lobbying by officials at the U.S. Department of Transportation and the state, Scott was still unmoved on Thursday, affirming his rejection of the federal project (while he beheld the launch of a federally funded space shuttle from Cape Canaveral) on the grounds that Florida taxpayers were still "on the hook" for potential financial overruns (despite repeated assurances from DOT officials that this would not be the case).

On Feb. 24, U.S. Department of Transportation Secretary Ray LaHood betrayed his pity for Floridians by giving the state another weeklong extension, leaving everybody in Tallahassee who isn't Rick Scott to scramble to the drawing boards once more. The following Tuesday, state senators Arthenia Joyner, D-Tampa, and Thad Altman, R-Melbourne, seized the baton from Simmons and filed suit against Scott in Florida Supreme Court.

The governor evidently has some supporters, however, evidenced by two counter-protesters at the Feb. 23 event in Orlando. One of them, the burly, middle-aged Chris Adamik, told us that he came out because he was incensed at the pro-rail bias in the media and argued that it "wasn't the department of transportation's job to create jobs," to which passerby and civil engineer Joe Lopke replied: "Anything we need to do to get people back to work in this state -  I don't give a shit how they do it."

After concluding the march, a couple of protestors started a chant summarizing the zeitgeist of February 2011: "Recall Rick Scott!"

Realizing that a recall isn't legally possible yet, one protester made a slight modification to the chant: "Abort Rick Scott!"

Perhaps it was the lazy residue of lunch dates in the 80-degree haze, but the Orange County commissioners hardly made an effort to fight off slumber when they convened on Feb. 22 for their weekly afternoon meeting. Not even a presentation by Ninth Circuit Court Chief Judge Belvin Perry Jr. about gritty matters like drugs, jails and crime was enough to keep the commissioners from hiding their un-enthusiasm at having to sit in a windowless chamber for hours while a gorgeous day conducted itself without them.

While Commissioner Lui Damiani kept his head afloat with his right hand and Commissioner Fred Brummer tested the recline of his chair, Judge Perry narrated a PowerPoint presentation detailing the state court's accomplishments, including the diversion of potential prisoners into a variety of court-sponsored programs that save the county an estimated $35,872,404 per year. The news was met by the exasperated blowing of air by Vice Mayor Scott Boyd.

Then Perry got to something more interesting, at least to the commissioners: the trickle-down effect of Rick Scott's proposed budget. Perry said that 32 judicial assistants, 10 court administrators and four staff attorneys would have to be cut to meet the demands of fiscal belt-tightening, to which Boyd perked up and mustered the strength to ask Perry what the cuts would mean for day-to-day operations at the court.

"Criminal judges will be forced to do the lion's share of their own legal research," Perry said, meaning that judges would spend less time in court moving cases along. Perry also said that the complex business litigation division would be "disbanded" and civil trials would "grow to a screeching halt" and would be prioritized based on how near a plaintiff is to death. "We will function, but we will be like molasses up north in the winter flowing down a tree," Perry said.

After an awkward pause, Boyd replied: "Thank you, Judge. That's what I wanted to hear." The audience laughed weakly, and Boyd was lulled back to the cradle of his palm and to daydreams of playing outside.