Wherein we bemoan the demise of the Florida Democratic Party, decry the smugness of Bank of America and then stare into a mirror to discover the real ugly 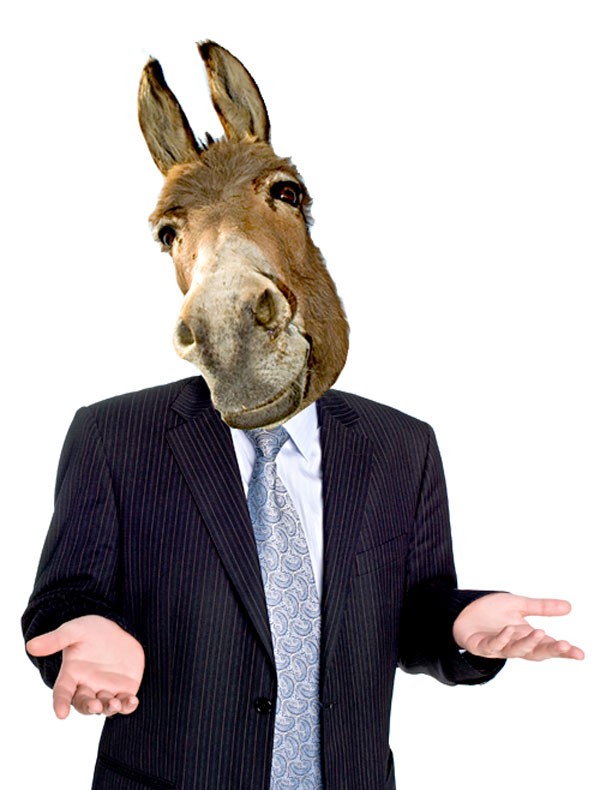 With all the recent cheerleading chatter insisting that somehow the Great Republican Blowout of 2010 would be a benefit to Democrats (because, well, diminished expectations), you might be forgiven for not noticing that said argument holds no sway here in the Sunshine State. Let’s check the scoreboard, shall we? We now have a $73 million otherwise unelectable governor, impenetrable House and Senate majorities, a fuse, a lighter and boom! Democrats should be angry enough to storm the capitol, banging plates with knives and calling for heads. Instead, they’re doing what Democrats do: politely shuffling around and whispering. This party needs an enema, or at least a hose.

A glimmer of hope popped up soon after the Nov. 2 slaughter when the stand-in-a-circle-and-place-blame crowd fingered Florida Demo- cratic Party chair Karen Thurman. Thurman, a lobbyist the party paid at least $100,000 a year for part-time hemming and hawing, was rumored to be stepping down, though no proper Democrat would rush to conclusions; besides, her resignation was also rumored before the epic fail, so why hurry into things? What are they, Republicans?

Still, a number of rank-and-file Democrats dove (or were tossed) into the pool of speculation about who would ascend to the throne of party chair. Most of them had just one thing in common: the ability to lose races. Beefcake attorney general primary loser Dave Aronberg was the first to hop out and dry off, effectively saying that although the party needs a shake up, he’d rather put his energies elsewhere (or, in common parlance, “Who wants to be the head on a dead body?”). Chief financial officer loser Loranne Ausley, and lieutenant governor and 2006 gubernatorial loser Rod Smith, cluttered up some shortlists, too. In fact, the only winner’s name we’ve heard floating around is that of progressive superhero and four-time winner State Rep. Scott Randolph. Ooh, now that would be exciting!

“I put it at like a 10 percent chance that I’ll officially throw my name in the hat,” Randolph says, somewhat forlornly. Turns out that as we were talking, Smith was already zooming up the Tallahassee freeway on his way to presumed anointment. Bummer. Randolph says that his main platform, were he to achieve the post, would be to extricate the state party from its Tallahassee cigar room and plop it down in the I-4 corridor where actual people live. But even that might not be enough to save what has effectively become a loose conglomeration of county Democratic Executive Committees stuffed with old people who look like extras from Family Ties. Those people, the various precinct captains and serial gripers, are the very people that will carry the most weight in electing the new party chair, Randolph says, but one of the most important tasks of new leadership would be to shake up the system, to throw a few harsh words around where due. You have to kiss them before punching them, though, and that can be tough.

“It’s difficult to reform when the thing you need to reform controls all the votes,” he says. “The elected officials basically have no  ability to control the party.”

Bring in the circular firing squad! Anyway, Randolph is calling for a stronger organizational structure, more youth inclusion, investment in technology and a plan to help the party fight its way out of the paper bag of ineffective bylaws that keep it from moving forward. Also, a little bit of can’t-be-’em-join-’em rhetoric: “The Democrats need a response to the Florida Chamber of Commerce, which is nothing more than an arm of the  Republican Party.”

Should none of that come to fruition, and if the party machine stays in Tallahassee to throw pencils at the ceiling and pout, there’s going to have to be a Plan B.

“The other option is to completely circumvent the party and organize it yourself,” Randolph says. “But Florida hasn’t shown that it has any progressive groups that are capable of doing that.” And an ACORN falls from a tree in the distance. Sigh.

Calling out corporate America’s hypocrisy is a game that’s been rendered dull by repetition, so these days it takes some especially noxious bullshit to drive us out onto the  playing field.

That was the case last week, when a self-congratulatory press release from Bank of America announced that, as part of the bank’s “Neighborhood Excellence Initiative,” a total of $450,000 would be doled out to five “local heroes” and two Orlando-based nonprofits as a reward for their efforts – though the five individuals will be forced to donate their five-notes to charities. “[T]he [initiative] is producing deep, long-lasting economic and social impact at the local level where it’s needed most,” the release bragged.

We’d wager that the bank is indeed making a deep social and economic impact, but that it’s more likely due to the policies of a subsidiary that, as economics professors William Black and L. Randall Wray put it, “defrauded more people, at a greater cost, than any entity in history.”

Writing in the Huffington Post last month, the authors referred to Countrywide Financial, which was acquired at the height of its infamy by Bank of America in 2008. The glaring tip of the mortgage-fraud iceberg, Countrywide was the target of a civil lawsuit filed in June by the Securities and Exchange Commission charging the mortgage company with issuing billions of dollars in fraudulent loans. The company was also sued in September by the Ambac Assurance Group, which took a closer look at 6,553 Countrywide loans it had insured and found that 97 percent of them did not conform to mortgage-underwriting standards. Despite all this, BOA has appointed senior leaders from Countrywide to its own top ranks and kept the bad loans on its books. “Foreclosure fraud is the necessary outcome of the epidemic of mortgage fraud,” write Black and Wray.

Then there was the revelation of BOA’s assembly-line work of “robo-signing,” a practice in which employees spend their days signing off on foreclosure documents – some achieving speeds of one signature per second – without verifying whether the information contained within is correct. And don’t forget about the bank’s foot-dragging with the Obama administration’s Home Affordable Modification Program. According to a government report released in August, BOA is one of the banks least likely to offer alternative mortgage modifications to home-owners whose earlier modifications were cancelled (which itself was often due to lost paperwork on the bank’s part).

So on second thought, we guess it is fitting that Bank of America is giving to organizations for the homeless. Guilt, after all, is harder to evade than accountability.

Another month, another “Most-Worst-Least” city ranking list for Orlando to feel bad about. We’ve been among the meanest, the dumbest, the poorest and of course the most dangerous in years past, but Travel and Leisure magazine just added insult to the City Beautiful’s gaping head wound: We’re one of the ugliest cities in the country, they say. We’re No. 5! Your mama!

“There aren’t enough hot moms around to elevate this No. 1 family destination out of its fanny-pack dowdiness,” bullies the mag in their “America’s Most and Least Attractive People” listicle. (They also threw us in with “America’s dirtiest cities” at No. 17 for  good measure.)

Rather than let the tears roll down its crooked nose and chin butt, Orlando has apparently decided to own its ugly – and to up the ante! Last week, Orlando International Airport broke out its spankin’-new full-body scanners in a self-flagellating effort to really bring on the self-loathing. Guys, you’ve never known true shame til you’ve seen your junk the way God intended: through an X-ray machine. (Ladies, you get a pass, as the female form registers a bit amorphously.) The Transportation Security Administration boasts that the machines work off “backscatter” technology that uses diffuse reflection to peek at your kibbles ’n bits. Speaking of bits, we’ll be filing “backscatters” somewhere between “rusty trombone” and “dirty Sanchez” in our loser lexicon. Why? Because we’re ugly.