Sure, you love Jesus when you're shopping. But what about the gays and the homeless people? 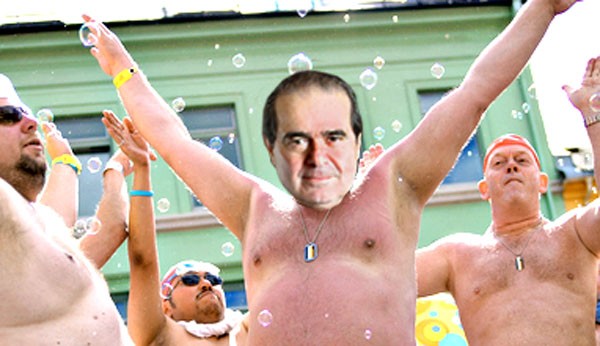 Just as we were heading into  our annual tryptophan-induced slumber, preparing for the onslaught of hand-holding prayer circles of thankfulness that are de rigueur on Thanksgiving (typically punctuated by tipsy older gentlemen burping up words like “troops” and “freedom”), it was all we could do to keep our squinty eyes from darting to look at the advertisements for Black Friday price cuts on all of our favorite shiny things. This is, after all, our routine: one day of gluttony, one day of frugal reward. Although this year has been tainted by abject poverty, political deflation and more war and anger than our uncle can shake his fists at (Hello, North Korea!), it wouldn’t be the holidays without some sort of polite reminder from our friends at Orlando’s Liberty Counsel that the only war that really matters is that big old war on Christmas.

A day before Thanksgiving, the Liberty Counsel released its eagerly anticipated “Naughty and Nice” list as part of its eighth annual “Friend or Foe Christmas Campaign.” We checked the list – even checked it twice – in hopes of finding some $300 big screen TV with our mug on it, but were sadly disappointed that Liberty Counsel kingmaker Mat Staver had skipped over us for much bigger boxes in need of his not-so-quiet Christ-like judgment. Among this year’s big winners on the “nice” side: “Best Buy has embraced Christmas and switched to the nice list, and Dick’s Sporting Goods has promised to change and include Christmas in their advertising,” sayeth Staver’s press release. Somehow, Best Buy managed to invoke the name of Christ some four times within the span of just 30 televised seconds! It’s like the second coming. As for Dick’s, surely they lost points for the “dick” reference, but made up for it by selling liberal-hunting rifles, right?

Places you won’t want to shop for fear of staining that ankle-length purity dress with the blood of secularism include, well, all the places you want to shop: Banana Republic, American Eagle Outfitters, Old Navy, Garmin (your GPS won’t show you the way to the Lord, my friend), Radio Shack and Staples. EB Games, powered by GameStop, apparently tried to offer an explanation for its love of the devil – “GameStop uses the word ‘Holiday’ in this case to express that on [Dec. 25, 2010] our stores are closed in observance of the holiday season, which supports many religious holidays such as Hanukkah, Kwanzaa, Yule and other holidays. GameStop does not discriminate against any religion and has therefore chosen neutral verbiage in this  case ... ” customer solutions supervisor Joe Capps told a holy consumer – but as any good Christian knows, discrimination is the gift that keeps on giving.

In fact, if you’ve run out of means by which to keep giving your Christianity to those who don’t want it, the Liberty Counsel is offering a $15 “Help Save Christmas Action Pack” that includes buttons and bumper stickers on its website. This war is not over, Christian soldiers. Onward!

A cruel reality of news is that it’s more likely to take place under the glare of fluorescent light bulbs than under perfect afternoon skies. This was the case Tuesday, Nov. 23, when a horde of gay folks and their supporters, all wearing red, were corralled into a large, but not exceedingly depressing, employee break room at the Orange County Administration building. The gay groupuscule was there to supervise the county  commission’s vote on an ordinance that would give legal teeth to the idea that it isn’t cool to discriminate on the basis of sexual orientation or gender identity. But the commission was running late and the county’s receptionists had to stem the alarming spread of gay in the lobby by quarantining it in a white-tiled area near the vending machines.

Randy Stephens of The Center, a LGBT organization in Orlando, practiced his ordinance endorsement speech with us while we languished in the queer quarantine. “With the exception of one person – me – you could be fired from your job [in Orange County] because of your sexual identity,” he said.

But that would only be true for the next 3,971 seconds. The ordinance sailed through the commission with nary a scratch, a far cry from the fire-and-brimstone-tinged cameos of John Butler Book and the marathon session it took to get the same gay-friendly laws on Orlando’s books in 2002. Beholding the tranquil county chamber filled with red shirts and warm feelings, Orlando’s senior anarchist Ben Markeson gave us a hint of his whispered Thanksgiving prayer: “Don’t let ’em fool you – there are some progressive aspects to Central Florida.”

Let’s hope so. Just days before Orange County nominally overcame its proclivity toward bigotry, in a Nov. 19 speech at the University at Richmond in Virginia, everybody’s favorite Supreme Court asshole, Justice Antonin Scalia, pulled out his hate flag and waved it over his turkey neck in an effort to prove that no gay person’s – or woman’s – rights are safe. At issue was the 14th Amendment, a little piece of “due process” liberty Scalia thinks should only apply to circa-1868 Americans, those living at the time the amendment was conceived. “But some of the liberties the Supreme Court has found to be protected by that word – liberty – nobody thought constituted a liberty when the 14th Amendment was adopted,” he coughed up with some bile gravy. “Homosexual sodomy? It was criminal in all the states. Abortion? It was criminal in all the states.” Sometimes just being a person isn’t enough.

Just ask the homeless! We’re now well into the fifth year of the City of Orlando vs. Food Not Bombs saga, and it isn’t getting any less interesting.

Happytown™ learned last week that Food Not Bombs – an activist group that feeds the homeless twice a week at Lake Eola Park – will be granted a re-hearing of its lawsuit against the city in federal appeals court in Atlanta, scheduled for the week of Feb. 14.

In the summer of 2006, the Orlando City Council passed an ordinance that banned groups from giving food to 25 or more people in a city park within two miles of City Hall – in other words, “public feeding.” Members of Food Not Bombs, believing they were targeted by the ordinance, appealed the decision in federal court. Two years later, federal Judge Gregory Presnell overturned the ordinance, ruling that sharing food can be considered expressive conduct protected by the First Amendment. In December of last year, the Atlanta federal appeals court came to the opposite conclusion and ruled in favor of  the city.

Food Not Bombs’ lawyer, Jacqueline Dowd, quickly filed for a re-hearing, and was notified a couple weeks ago that it would be granted. According to Dowd, a federal appeals court gets about 27,000 requests for re-hearings annually; only 75 are granted. “If I had known what a long shot it was, I probably wouldn’t have tried it!”  she said.

Because the appeals court is essentially starting over with the case, Presnell’s ruling is currently  the supreme judgment – so feedings are happening routinely at Lake Eola, as they have since 2005.

Dowd says that she’s “feeling pretty good” about their prospects for a victory in February, but if Food Not Bombs loses, it could throw a Hail Mary and appeal to “The Supreme.” Court, that is. “There are other cities all across the country waiting to see what happens,” Dowd says. “It could possibly set some precedents.”

To Dowd, whom we spoke to the day before mass turkey consumption, it’s a no-brainer that sharing food is a form of expression: “It’s the day before Thanksgiving – try and tell me that food doesn’t have symbolism.”