Mascot Gov. Rick Scott will be no challenge for CannonHair, the Holy Land turns 10 in secret and you'll never get high – legally – in Florida 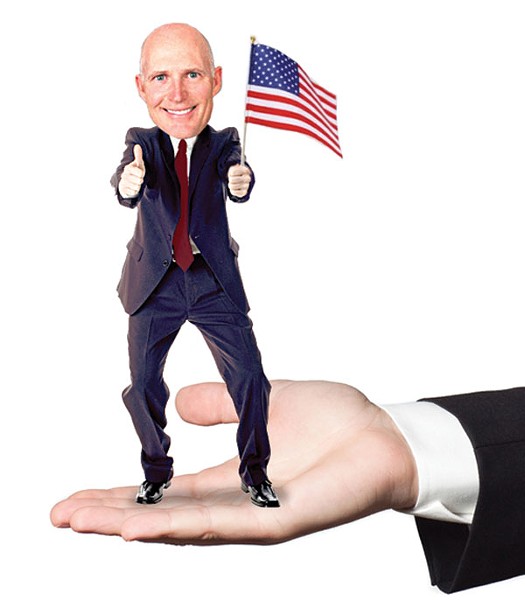 Now that we’ve had time to thoroughly digest the black feathers of the political crow crammed down our throats on Nov. 2 – a whiskey chaser helps, trust us – that whole “it’s not that bad” feeling is upon us. Let’s look at the facts: We already had a Republican legislature and a Republican governor, U.S. Sen. Marco Rubio was a statistical inevitability, Florida is full of dumb people (always has been) and now, when things go wrong, we don’t have to run to the defense of a visibly meek Democratic Party. Take a deep breath. Everything’s going to be just fine.

Except it isn’t! Just one day after ooh-rah braggadocio of the worst fraternity party ever, the incoming – and now invincible – Florida legislative leadership was already spurting out a party line of piss hinting at the jackassery it’s got up its sleeve. Future House Speaker Dean Cannon (R-Winter Park) issued the first urination in the form of an ominous e-mail to legislators on Nov. 3.

“Over the last several months, many of you have expressed concern over the impact of multiple vetoes that followed the 2010 Legislative Session,” he stopped rubbing his hands together long enough to type. “I will meet with incoming Senate President Mike Haridopolos tomorrow to discuss the possibility of a special session to address these and other issues that may be best addressed through legislative action in advance of the 2011 Legislative Session and will send additional information following that meeting.”

Uh-oh. It was enough for one unnamed Democratic political operative to nervously speculate to us that “[Gov.] Rick Scott will not be the most dangerous man in Florida, Dean Cannon will be. Rick Scott will just be their mascot.”

Aren’t mascots supposed to be fuzzy and cute? Anyway, the next day Cannon – having apparently taken his meeting with the hair of Haridopolos – issued a more detailed memorandum, outlining 10 potential Crist-penned vetoes that he wants to challenge, because nobody’s holding any grudges here. The goal, according to Cannon’s edict, is to only attack the simplest issues “that can be handled within a single day [Nov. 16] and to focus our business on remediation of problems or drawing attention to future plans.” Wait, what? The fear, naturally, was that CannonHair would go straight for the liberal jugular and knock down Crist’s monumental dismissals of the abortion-ultrasound bill and the teacher-tenure bill. That won’t be happening … for now. Instead, the November pow-wow will bring to the floor such eye-closing issues as agricultural tax breaks, Medicaid (slouching toward privatization?), tort reform and, well, septic-tank inspections. That’s just the tip of the iceberg, of course. This winter’s potential special session and next year’s regular session will be a veritable group hug for the right-wing clones. In addition to the governor’s office, Republicans now control 28 of the state’s 40 Senate seats and 81 of its 120 House seats. Tallahassee Democrats, meanwhile, will take up knitting.

In somewhat related news, reports also surfaced on Nov. 3 that spooky future Gov. Scott might not be too keen on Florida’s extreme railroad makeover, even though both Cannon and Haridopolos are noted supporters of both SunRail and high-speed rail. Prior to his election, Scott said in a debate with Democrat Alex Sink that he wouldn’t want to move forward with the projects if they were going to cost the state any money; the problem being that the state is already on the hook for 20 percent of the Orlando-Tampa high-speed rail line (federally funded to the tune of $2 billion) and 50 percent of SunRail. Haridopolos’ camp told the Orlando Sentinel that he would continue to support the two rail projects as they stand, but would not get behind the prospective Orlando-Miami rail project, because “It’s clear Washington won’t have the money for that.” We’d say it’s clear nobody is going to be having any money for anything for quite some time. Let’s get to work.

Or maybe we should just pray? Amid all of the doom and gloom of the week that will haunt us forever, we almost completely missed out on an upcoming divine milestone (although, to be fair, this state basically is a Southern Baptist church right now, so forest, trees). Last week, ABC News came to town to craft an irony-free ode to Orlando’s favorite attraction, the Holy Land Experience, on the occasion of the park’s 10th anniversary in February 2011. How exciting!

“You can never be too young for the Holy Land Experience,” the ABC website genuflected. “There’s a children’s area with a rock climbing wall, a theater dedicated to Noah and his ark and a spot where kids can walk into a stinky whale’s mouth and see a trapped Jonah. There’s even a spot where you can pose for a photo of you walking on water with Jesus.”

Not that the Holy Land folks really want secular people to know any of that. Even the ABC reporter confessed “we were rushed through the attraction, prohibited from taking photos or video and given no chance to mingle with the guests.” What could owners the Trinity Broadcasting Network possibly have to hide? Well, if our own reporting (see “Jesus TV,” July 12, 2007) is anything to go by – we received similar curt treatment when we covered TBN’s $37 million acquisition of the failing Zionist retreat three years ago – there’s plenty to be ashamed of. It’s worth reminding heathens that the estimated $300,000 in annual property-tax breaks (Holy Land is classified as a church and therefore tax exempt) and all of the run-off from the $35 to $50 in entry fees for a park with no rides helps to line the crazy wigs of TBN leaders Jan and Paul Crouch. Also, Paul Crouch paid a former staffer $425,000 in hush money to keep an alleged gay sexual encounter under wraps. And those little prayer sheets collected at the entrance – “60,000 to 100,000 a year are completed,” says ABC – are little more than a fundraising scheme to bring the purple Crouch hair that much closer to God. Oh, you mean none of that matters as long as Jesus is invoked? Happy birthday, Holy Land.

As we said good riddance to our ballots on Nov. 2 and arrived at the office, dropping into our chairs with a sigh, we opened our e-mail … to find a message about the 2012 ballot. For Christ’s sake! It was a press release from People United for Medical Marijuana – abbreviated PUFMM, for obvious reasons – based right here in Orlando, hailing the South Miami City Commission for passing a resolution urging both the feds and the state to decriminalize the medicinal use of marijuana.

The inconsequential news was really a vehicle to make us all high and make us all hit the political pavement for the legalization of medical marijuana in Florida – only 652,356 signatures to collect in the next year and half! Interestingly, we’re roughly halfway between the March 2009 date when the group started the campaign, and the Division of Elections’ Feb. 1, 2012, deadline. Currently, the total of verified scribbles stands at 24,455. So we called them to ask: Besides quitting pot, how are you going to do what you do 27 times faster?

By using paid signature collectors, coughed volunteer Josh Giesegh. He says PUFMM has been in contact with a company that says “if we give them a million dollars, they can guarantee a million signatures.” Giesegh couldn’t provide the name of the shadowy name harvester, but reminded us that all ballot initiatives do such things. (A call to PCI Consultants, the country’s largest “petition management firm,” hired by Fair Districts Florida to collect signatures for Amendments 5 and 6, went unreturned by press time.)

Although the initiative has only raised $28,716.93 to date, Giesegh says there’s more money waiting in the wings when they get to the Florida Supreme Court’s “credibility threshold” of 67,683 votes. But he also mentioned that Michigan took 14 years to get medical marijuana on the ballot – which, in weed years, is a really long time. So don’t hold your breath, Florida. Or do.