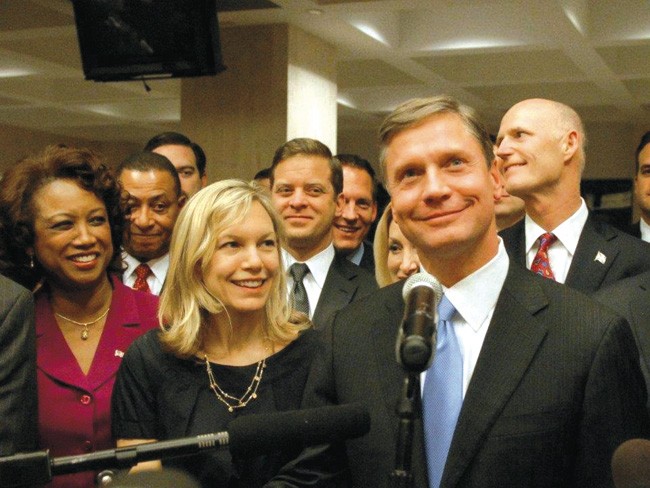 It was never going to matchthehanky drop of the explosive conclusion to last year's Florida legislative session – who can forget the tears of state clown,Senate President Mike Haridopolos, as he threw a tantrum in the face of brutish House Speaker Dean Cannon? – but during the March 9 midnight madness that wrapped up this year's session, spare handkerchiefs were used as surrender flags for a Republican party that had overreached both logic and reason. Both Cannon and Haridopolos are winding down their limited terms of service – that's right, our CannonHair™ dreams are dead now, sigh. Some argue that a fragility in the Florida Republican supermajority had been noticeable throughout the session largely because Governor Rick Scott is just about the least popular person in the world, but also because of a lack of conservative consensus in the wake of a redistricting nightmare for the Republican Senate. Pass the hankies!

The legislature did manage to pass a $70 billion budget that put most of the financial burden onto the shoulders of students, the poor and the middle class, while securing corporate tax cuts for the wealthy. Also, the trumped up smoke and rear-view mirrors of auto-insurance fraud resulted in a fairly sweet bailout for the well-fed auto insurance industry. Despite the appearance of tossing $1 billion to public education (after stripping schools of $1.3 billion the previous year), a number of bills designed to turn the schooling of our children into a profitable enterprise for carpetbaggers and Christians alike (more virtual schools, school prayer, an increased voucher program for charter schools) will find their way to the governor's desk. Predictably, an overhaul of legislative ethics will not be meeting them there.

Like most sessions, though, it's the bills that failed that serve as defining moments. Prison privatization was perhaps the governor's biggest loss, just one year after he tried to force the measure through in the state budget. The so-called parent-trigger bill, designed to allow parents to force the restructuring of failing public schools into idyllic (or, even worse) charter schools, was killed in the Senate. An attempt to "streamline" the foreclosure process by speeding it up at the peril of troubled homeowners died a quiet death, the casino bill failed and major attempts at restricting reproductive freedom were soundly refused. So, how did this all happen?

"Prison privatization set the tone for the rest of the session," says state Rep. Scott Randolph, D-Orlando. "Nobody thought that Rick Scott was popular enough to hurt them anymore."

State Rep. Darren Soto, D-Orlando, concurs, saying that for the first time (OK, it is only the governor's second year, but still) Scott had to play powerbroker on the Senate floor while Haridopolos floundered at leading his body.

"You can't represent niche interests," Soto says. "You saw [Haridopolos] trying to run the Senate like the House. When you do that, it's going to cause an equal and opposite reaction."

Both legislators note the resurgence of moderate – or "independent-leaning" – Republicans like Sen. Paula Dockery, R-Lakeland, and Sen. Dennis Jones, R-Seminole, who split ranks with their party in order to shout some sense into a crumbling Senate. Also, Cannon wasn't prone to forcing floor votes without committee hearings just because he could with his impenetrable supermajority. In essence, then, the system seemed to be working.

Well, not totally. Senate redistricting chairman Don Gaetz, R-Niceville – who, it should be noted, is the incoming Senate president – got called out by the Florida Supreme Court for "manipulating" the redrawn Senate maps to favor incumbents (surprise), and should approach his new leadership post with plenty of egg on his face, though he's playing that down now.

"While the Senate strongly believed that its entire redistricting plan complied with federal and state law, we are encouraged that the court found three-fourths of the Senate map to be legally valid," he said in a statement on Friday. "The court approved 32 of 40 districts and took issue with eight currently served by both Democratic and Republican senators."

Whatever. The legislators will be hashing it out in a special redistricting session March 14-28, which ought to allow Republicans enough time to figure out exactly who they are again (and pull out the real map they've been hiding) – or at least give our CannonHair™ that one last chance to make out that we've all been waiting for.

When Occupy Orlando first started out in October, holding protests and camping out in Senator Beth Johnson Park, most of us here at Happytown™ HQ were with Occupy Orlando in spirit but not so much in practice. Yeah, the system is broken and corrupt, we agree it needs to change, we are tremendously disappointed in the current state of affairs. But to us, camping out and holding signs isn't going to do a whole lot to change things, just like releasing a slick film about a Ugandan guerrilla leader that appeals to people's sense of outrage and drives them to Tweet #StopKony and #Konysurrender isn't really likely to do anything to improve the lives of kids victimized by the Lord's Resistance Army. (Especially when that leader has been indicted for his crimes, but has escaped and is on the run from the International Criminal Court. But that's a whole 'nother thing we won't get into today). But Occupy was fighting the good fight, and at least they were raising awareness – just because we don't choose to sleep out in parksdoesn't mean we don't respect the right of others to do so to make a point. Few in Orlando government, though, seem to agree.

As of this writing, Occupy Orlando has been at it for five months, protesting, holding general assemblies, camping out on the streets. They've been chased around by authorities everywhere they go. Their belongings were hauled off by the Orlando Police Department one night, while Occupiers looked on, helpless to do anything to stop the cops from confiscating their tents, signs, generators and even their American flag.They've been arrested – and jailed – for such minor infractions as writing on sidewalks in chalk and being in public parks after curfew. And now the Orange County Commission has drafted a very special resolution expressly written to make it impossible for Occupy Orlando to continue to occupy the space outside of the Orange County Administration Center, where they've been protesting for a little more than a week.

In other words: Think of the health and safety of the commissioners who have to walk through a throng of dirty hippies and their belongings strewn about the sidewalk. Somebody might trip over a tent pole! Slip and fall on a falafel sandwich!Catch a whiff of body odor and become offended! We've got to do something!

So Orange County Mayor Teresa Jacobs leapt into action and invited Occupy Orlando to come sit in on the Orange County Commission meeting. She "personally visited protesters" on Monday, March 5, a press statement from Occupy Orlando says, but she didn't tell them that the reason they were being invited was so they could witness the commission vote on the resolution evicting them from the property. "Occupy participants have expressed feelings of being ambushedafter learning of the resolution."

The resolution relegates the protesters to a small spot (subject to change, as needed) on the corner of Church Street and Rosalind, where they can protest from 6 a.m. to 10 p.m. No tents, bedding, shelters or other structures will be permitted. And certainly no writing on the sidewalks in chalk. That's just unsightly.

At least Jacobs gave Occupiers a couple of days to collect their tents and Guy Fawkes masks before throwing them off the property. Last week, Occupy Orlando was waiting for its orders to vacate and telling supporters to contact their county commissioners to urge them to reconsider limiting occupiers' rights to free speech on public property. That didn't work; the site was broken up in a pre-dawn raid on March 13. Occupy Orlando legal team member Shayan Elahi (who, by the way, is running for the Florida House of Representatives) made vague allusions to seeing this thing go to court. "These ex post facto laws and resolutions have a chilling effect on free speech and are looked down upon by courts, especially the Supreme Court," Elahi says. "It suggests our local government is more interested in banning criticism than addressing the concerns of citizens." What else is new?