The week when Haridopolos learned how to lie on YouTube, Republicans falsely conjured reparations and objectivity was kicked out of the Middle East. This is the week we'll never forget? 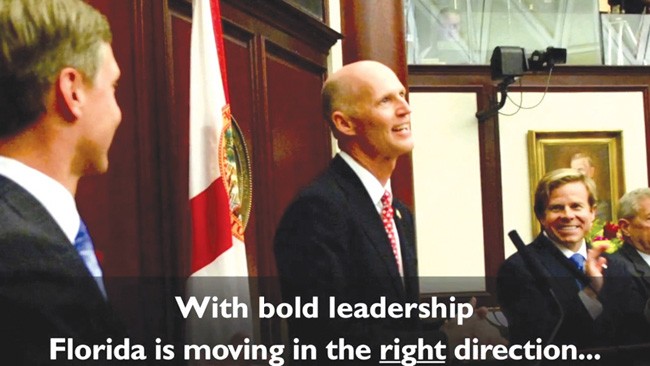 You know those days when you can’t seem to find the Braille bible that’s supposed to be tucked away in your rancid extended-stay nightstand – you know, underneath that sock, that cigarette and that condom wrapper, in that drawer next to the lube? That’s when we typically lunge at our computers to look for inspiration, specifically from the somehow still-active U.S. Senate campaign Twitter account of beauty school dropout (and Florida Senate President) Mike Haridopolos. So, there we were last Thursday, scrolling through such sound-bite scripture as “Fight the good fight of the faith. Take hold of the eternal life to which you were called. – I Timothy 6:12” (filthy!) and “Be quick to listen, slow to speak and slow to become angry. – James 1:19” when we slowly (and angrily) came upon a missive that read “Check out our new video: Something Different is Happening in Florida” with a YouTube link attached! Hello, politi-porn!

“The year is 2011 and the president is Barack Obama … ,” it begins as a slow-motion slide-show of clip-art renderings of misery plays to a funereal soundtrack. Washington is spending too much, unemployment is bad, foreclosures are eating your babies. “But in Florida something different is happening … ,” it continues, just before making a logic leap to explain why Florida is not part of the miserable trend. “With bold leadership, Florida is heading in the right direction,” the video declares over a picture of Gov. Rick Scott (with Haridopolos grinning in the background), summing up Republican victories in a feel-good package of budget cuts, tax cuts, spending cuts, welfare reform “and more money in your pocket.” Wait a minute. First of all, there is no more money in our pockets (we checked). Second of all, what the hell is Haridopolos running for? And, if we may have a third, who paid for this?

“There wasn’t a cost associated with the production of the video as it was produced and edited on the Senate president’s personal equipment, and it was disseminated through his social media networks,” Haridopolos spokeswoman Lyndsey Cruley writes in an email.  “Additionally, the president is simply interested in getting the facts out directly to Floridians, and we will continue to do that through a variety of channels, including videos, emails and social media.”

Apparently, Haridopolos drummed up this fact-free psycho-thriller all by his lonesome because he was either bored or wrong. Politicians are just like us! That seems unlikely, though, as the video is posted on the flsenate.gov website and, while shoddy, doesn’t seem to reflect the poor quality of a video we’d imagine was thrown together by Haridopolos using the iMovie software on his MacBook.

Anyway, our Pink Slip Rick friends at Florida Watch Action were quick to put up a response video in which a very similar montage is used with the same title to communicate an extremely different message: Gov. Scott killed 40,000 jobs by shutting down the high-speed rail project, cut $1 billion from education and rejected federal healthcare dollars. “Something different is happening in Florida,” it ends. “A coordinated attack on the middle class.”

“The blatantly political video released by Senator Haridopolos and hosted on the Florida Senate government website is not only incorrect in its assertions but a flagrantly inappropriate use of taxpayer dollars and a taxpayer-funded institution,” says the group’s executive director Susannah Randolph in an email. “While middle-class Floridians are struggling with 10.7 percent unemployment, a lack of healthcare for their children and record-high foreclosure rates, the senator’s priorities are on promoting his image and the image of Rick Scott. This shows a complete lack of leadership on the senator’s part.”

Also, Florida Watch Action says that their video was compiled by an intern (free!) but considering the staff involved in managing said intern, it may have been around $300. Now if only Haridopolos were so honest.

As the 2012 elections draw nearer, we were wondering how the issue of race was going to be dragged into pre-presidential politics – then, thanks to local PR wizard Ryan Julison, we learned about Pigford II, a $1.25 billion settlement between the U.S. government and a legion of black farmers who allege they were discriminated against by the U.S. Department of Agriculture when they applied for farm loans between 1981 and 1996. The case, named after a North Carolina soybean farmer who filed the original suit, rattled the USDA so much that in 1994, it ordered a study of its loans. The results quantified the discrimination – loans to black male farmers were, on average, 25 percent smaller than those granted to white male farmers, white farmers received 97 percent of disaster payments,and so on. The feds would eventually shell out nearly a billion dollars to more than 15,000 claimants, but tens of thousands of applications were filed late and remained unpaid. Enter Pigford’s second act, which was mostly funded by a special appropriations act which was signed by President Obama in December last year.

The farmers of Pigford II hoped that the settlement would be approved on Sept. 1, but instead, U.S. District Court Judge Paul Friedman said he would take the case under advisement. For Orlando attorney Greg Francis – Julison’s client and a ranking attorney within the army that is the Morgan & Morgan law firm – that meant the most hectic half-year of his career would have to wait. Francis is one of three attorneys responsible for thinning out an 71,684-strong herd of farmers hoping for a piece of the federal pie. What will result from this vetting process, Francis says, is a smaller group of farmers well-situated to receive between $50,000 and $250,000 in damages, depending on how badly they’ve been shafted and if they can prove it. This burden of proof will be tested in thousands of face-to-face meetings conducted by attorneys in a tour of the Southeast; most of the farmers are, according to Francis, from Mississippi, Alabama and South Carolina, with some scattered in Florida and others who decided there wasn’t much future in farming – mysteriously – and moved to Chicago and Detroit.

Oh yes, the presidential race. Once Pigford II is finally approved (stay tuned to Bloggytown for updates), prepare for plenty of references to farm animals from the conservative pulpit (again!). Republicans ranging from conspiratorial message board trawlers to crisp-suited National Review subscribers have pegged the Pigford settlement as, naturally, pork. In July, Rep. Michelle Bachmann, R-Minn., attacked Pigford during a visit to Iowa, calling the settlement “proof positive of fraud” – though she didn’t bring forth the said proof. (For what it’s worth, her colleague, Rep. Steve King, R-Iowa, said Pigford II amounted to “modern-day reparations” for black people.) Surely, we’ll be keeping an eye on Bachmann’s campaign when it stops in Mississippi.

As you may be able to tell from the subject of this week’s cover story, or perhaps, from our July 7 piece, “Point of no return,” at least one of us here at Happytown has an unhealthy interest in Middle-Eastern affairs. It’s for that reason we braved traffic and boredom to make our way to the University of Central Florida on Sept. 1 to hear New York Times Beirut bureau chief Anthony Shadid speak about his wild year in the Middle East – in March, Shadid and three of his colleagues at the Times were shot at, captured and held captive for six days by forces loyal to the now-deposed Libyan president, Col. Moammar Gadhafi. In the following months, Shadid hung out with young Syrian activists who were learning the art of resistance on the fly, an education which included shooting onions from plastic pipesvia ignited hair spray.

Shadid’s feelings on the Arab Spring were obvious – he referred to Arab governments’ soldiers and police as “thugs,” and regarded the Libyan capital of Tripoli as “liberated,” rather than, say, “under rebel control.” Surely, we too would be upset for being forced to urinate in a jarnext to our filthy coworkers in a Libyan prison cell, but shouldn’t a New York Times journalist have a little more “objectivity” about all of this (ha!), whatever that may be? “I don’t believe in objectivity,” he replied. “I think it’s an excuse to make conflicts that are unequal, equal. … When I go to Tripoli and I know that Col. Gadhafi is shooting protestors with anti-aircraft guns, in the head, I know what’s right and wrong.”