This week we take a SWAT at Patty Sheehan's condo-hostage shenanigans, get ready to take a bullet wound in all 50 states and listen to Newt Gingrich fans discuss a new target-practice immigration policy. BANG! 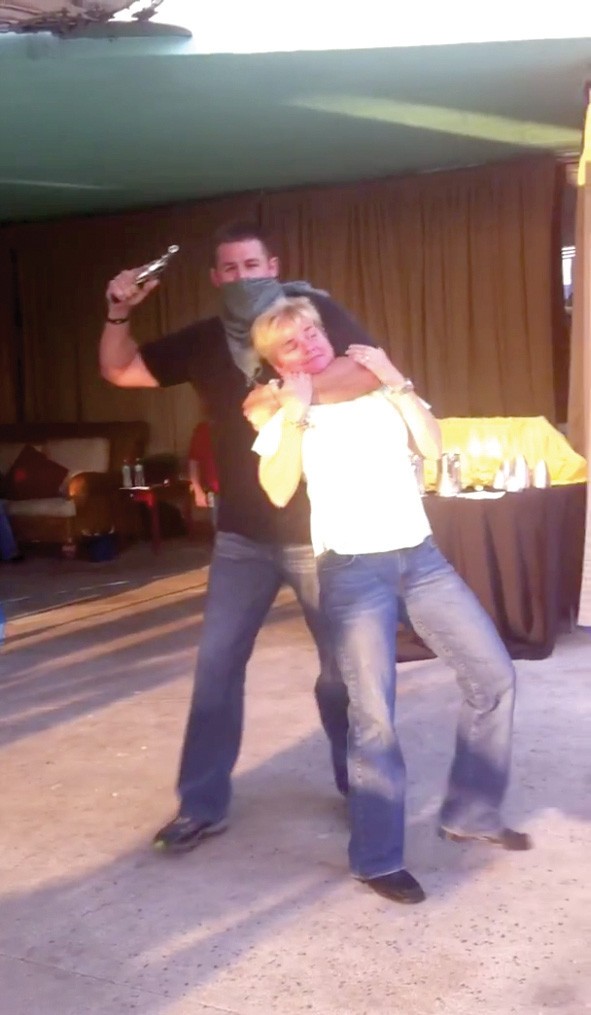 Sometimes, we’re astounded bythe access we are allowed. Take, for example, our invitation to the “pre-party” on Sept. 14, hosted by the Friends of Lake Eola in preparation for a much larger Downtown Night Out event the following day. We were told in the press release that this social appetizer, held at the Waverly condominiums, would feature a “grand entrance” from the Orlando Police Department’s SWAT team, which would “rappel from the building’s rooftop onto the pool deck to rescue District 4 Commissioner Patty Sheehan during a hostage situation demonstration.” Naturally, we were going.

We arrived amid an uneasy confluence of social circles – stocky, plainclothes police officers standing next to rich, old women smudging their lipstick with brownies, standing next to Sheehan’s black-shirted boosters, like the Friends of Lake Eola’s Brian Braswell, who had arranged the SWAT exercise with Chief Paul Rooney. The chief made our typical prodding unnecessary by introducing himself first, but when he heard the phrase Orlando Weekly, he was quick to inform us that there was “nothing negative” about the impending demonstration. “It’s all on duty. There’s no overtime or anything like that,” adding that “we need to train.”

For more training, that is. (Apparently, the manager of the towering Vue condo skyscraper wants a demonstration as well – stay tuned.) But first, a short history of rappelling in Orlando: A SWAT officer next to Rooney recalled bouncing vertically down the facade of City Hall, as well as that of the old Amway Arena – in training, of course. Rooney, who has been on the OPD payroll for nearly a quarter of a century, had to dig deep to think of a time when Orlando SWAT officers combined rope play and real crime fighting– he arrived at the year 1993, when cord-straddling cops were sent to an International Drive hotel “just to get a better view of the suspect.”

After a half-hour of observing mindless, finger-food-laden chatter, we were practically drowning in our own anticipatory testosterone. After 15 more unbearable minutes, the scripted mindlessness be-gan. Plainclothes Commissioner Patty Sheehan took to the mic, and, brandishing her patented Victim Card, dredged up the horrors of the era when the anarcho-vegans of Food Not Bombs wreaked havoc through four hours a week of pure homeless feeding terror. “One of the residents of the Waverly was mugged after one of the feedings, but you never hear about that in the media,” she said. Can someone please tell Sheehan that this thing is over?

Chief Rooney then took to the stand, and after some fluff, finally, finally, it began: “You’re in for a treat,” Rooney said. “If you look up …” BANG! A man with a bandana-covered face appeared with a revolver, strong-armed Sheehan, who wiggled lamely, and fired off a blank right next to our fucking ears. Then, the corniness ensued, with more deafening, wine-glass rattling shots. We posted video of the whole charade in Bloggytown the day of the fiasco, but we’ll give you this sample of dialogue. [Gunman: “What? Are you going to bring in the SWAT team?” Police negotiator: “You want the SWAT team?” Gunman: “Bring it on!” So, porn, then.] BANG! Jesus Christ, that’s loud! We wished so badly that the six Food Not Bombs members arrested in 2007 for violating a noise ordinance – for drumming and shouting outside a fundraiser for Mayor Buddy Dyer – were here for this.

Even worse, we were so distracted by the SWAT officials bursting from a smoky stairwell with riot shieldsthat we hadn’t even noticed the rappelling! A nearby audience member said we didn’t miss much, though – we were told the officers descended from floor to floor at a somewhat leisurely pace while the faux drama was playing out. One young viewer, standing next to us in the elevator, summed up the evening nicely. “It’s a good thing they’re cops,” he told us, “’cause those guys are shitty actors.”

Speaking of bullets flying around for no reason, the long, arduous battle waged by the National Rifle Association to make sure that e’erybody with the slightest violent inclination – or, you know, a concealed weapons permit – is universally allowed the privilege of firing off them there barrels on an American whim (no matter what individual state governments think) may be coming to a close. We covered Florida’s own precarious conceal-carry law (see “Shoot first, ask questions later,” Sept. 30, 2010) when it became apparent that the Sunshine State’s willingness to give anybody a concealed weapons permit had resulted in a high-profile murder in Philadelphia.

Now, a gun-rights bill sponsored by U.S. Rep. Cliff Stearns, R-Fla., has, for the first time in more than a decade of trying, been given a hearing in the House Subcommittee on Crime, Terrorism and Homeland Security. According to the Ocala Star-Banner, the National Right-to-Carry Reciprocity Act would ultimately force all states to respect the permits obtained from concealed-carry states like Florida. The only caveat is that gun toters would have to obey the gun laws of the state they are in, not the state from which they got their permit. How’s them for states’ rights?

“This bill is a step backwards in an effort to enhance gun safety because it would overrule existing judgments enacted by states controlling who should be allowed to carry concealed weapons inside their own borders,” argued U.S. Rep. Bobby Scott, D-Va., according to the Star-Banner.

Perhaps more importantly, the 38 states that refuse permits to those with violent criminal records – and the 29 states that withhold permits from drunks – are basically about to be out of luck. What the NRA wants, the NRA gets.

There’s something entertaining,even addicting about suffering, isn’t there? Why else would we have sat through the entire Tea Party-sponsored debate on the night of Sept. 12, listening to the die-quickly diatribes of the Republican candidates jousting over the question of whether to vaccinate or not to vaccinate? What’s scary, however, is that this queer interest continued on into the following days – and all of a sudden, there we were, on the third floor of the Orlando Public Library, in the midst of the constituency of the East Side Tea Party, listening to Newt Gingrich speak.

“I’ve been watching the president,” Gingrich began, “and I’m stunned by the combination of arrogance and lack of common sense.” We were fully immersed, once again, in a frightening alternate universe. Gingrich’s statements – “Presidents aren’t monarchs,” “Who does he think he is?” “I don’t think Obama has a sense of humor,” “Obama is the best food-stamp president in American history” – were met with approving grunts of an almost sexual fervor. By the 15th minute of the speech, Gingrich clearly had the audience in the palm of his hand, spinning a suspenseful yarn about Obama’s big government intrusion into the headquarters of Gibson Guitars – on charges of illegally importing Indian wood; the company’s CEO, Henry Juszkiewicz, is a donor to Republicans – to which Gingrich concluded: “The Obama administration is a direct threat to the freedom of every American.”

Alas, the romantic danger of this alternate universe became downright scary after the Q&A started, and one audience member suggested that America make a section of the Mexican border a “target range for military, law enforcement and private citizens.We don’t have to spend five cents on fencing or anything.” The audience laughed and clapped in approval. We’d give you more craziness from this guy, but the video is on our website, and besides, we’ve had more than our fill of indiscriminate firing. Somebody shoot us now.