Vouchers are like depression gift certificates, city elections are like moving goalposts and gas prices are too damn high for Brian Feldman. 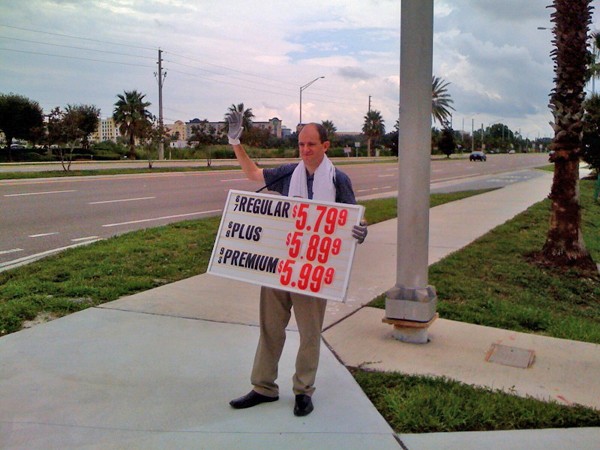 With all the acrimonious chatter about teachers, teachers’ unions and whether Florida’s moth-eaten cross-stitch of a public education system is indeed worth its weight in dumb children, it’s easy to get lost in the political back-and-forth and forget that, as of now in Florida, ABC is just about as easy as 123 – assuming those numerical digits come with dollar signs attached. We’re going to voucher our way to success! Wait, do public schools even matter anymore?

Not according to Gov. Rick Scott, who descended from a dark mountain of “I don’t care” on June 27 to peddle his message of kids-as-coins to parents lulled into the belief that their spawn deserve special attention from money-hungry strangers. The visit to a Winter Garden charter school came not suspiciously on the same day the Orlando Sentinel offered the governor a well of ink to celebrate the signing of five education-oriented bills intended to diversify (and thereby confuse) Florida’s already threadbare education system.

“With these pieces of legislation, we open doors of opportunity for students with disabilities, create stronger charter and virtual schools, and strengthen parents’ right to choose the best education for their children,” he scribbled as sweat dripped to the page from his maniacally bald head.

In other words, less regulation and more business involvement makes Jack a smart boy. Well, it turns out that at least one component of Scott’s twisted primary school thrill ride may not be all it’s cracked up to be. At issue is the expansion of the McKay Scholarship Program (named after a former Republican state senator who had a hard time finding the proper education for his daughter with learning disabilities in the mid-’90s) to include even more students, potentially 51,000 more than the 21,000 it already “assists.” As a scathing June 23 report in the Miami New Times points out, the program is “like a perverse science experiment, using disabled school kids as lab rats and funded by nine figures in taxpayer cash: Dole out millions to anybody calling himself an educator. Don’t regulate curriculum or even visit campuses to see where the money is going.” Uh-oh.

Of course, that’s just in Miami, right? Well, no. It turns out that former middle school basketball coach Julius Brown, who received more than $2 million in voucher money from the state’s Department of Education between 2006 and 2010 (plus $236,000 in tax credits) for his somehow mobile enterprise, the South Florida Preparatory Christian Academy – “200 students were crammed into ever-changing school locations, including a dingy strip mall space above a liquor store and down the hall from an Asian massage parlor,” reports the New Times – has started himself a new school after a spate of complaints and litigation. Welcome to Sunrise Prep, an empty building at 1200 W. Colonial “Blvd.” (sic), with a website that promises that it “puts God first in all that it does.” It should be noted that Brown was fond of paddling his students in South Florida, just like God, and is about to face a wrongful death lawsuit for a bus accident involving students. Anyway, Sunrise Prep claims to be enrolling for classes starting this August for a small annual tuition of nearly $9,000 per student. Surely Rick Scott will be glad to pick up your tab. Think about the future!

Or, think about the past. You might recall that there was a big political dust-up back in 2008 when your state representatives tried to make a statement by moving Florida’s presidential preference primary up to January, thus resulting in a slap on the wristfor Republicans and halvsies delegate representation at the national convention for Democrats. Around that same time – specifically in June 2007 when they heard the news – city officials lobbied to make sure that municipal elections (which are typically held on the second Tuesday in March, about when the primaries are supposed to occur) could piggyback on the primary ballot, thereby saving the city $123,000 it would have to pay out of its general fund for a standalone election. “A higher voter turnout is likely if the city general election remains on the same date as the [primary],” the city begged in a council agenda item.

Jump forward a few years and you’ll find the city suspiciously flip-flopping to the other side of the issue, arguing that a standalone election is practically necessary and should be held on April 3 to avoid voter “confusion.” OK, we already soapboxed this in last week’s edition of “Council Watch,” so we’ll spare you too many details: Basically, it’s a sham built to favor Mayor Dyer’s reelection. On July 11, the City Council will cast a second vote on the new election ordinance, making it a firm reality. Why? Because Republicans aren’t going to let us know when the primaries are until their committee decides by Oct. 1, the city whimpers. Even then, the city expects a repeat of 2008 with the primaries cramping their way up to January.

That might not be so. According to a June 28 story in the Palm Beach Post, Senate President Mike Haridopolos is eyeing a primary date sometime between March 1 and March 3, meaning the Thursday, Friday or Saturday before Super Tuesday. As it stands, the city’s default date for municipal voting is the second Tuesday in March, so in the end this could all be redundant. And expensive.

“I think it demonstrates a real recklessness as far as wasting taxpayer dollars,” says Commissioner (and mayoral hopeful) Phil Diamond. “It certainly would be ironic if the primary would have fallen on the same date.”

one of the finest traditions in Orlando’s history, the rip-off, is under attack by Mayor Buddy Dyer and City Council. The two gas stations located nearest the Orlando International Airport, Sun Gas and Suncoast Energys (sic) located on opposite sides of South Semoran Boulevard, have racked up fines of $14,250 apiece as this issue goes to press ($250 a day since May 12) for not posting their ridiculously high prices on signage visible to commuters, per a city ordinance passed last October. How high? Try $5.79 per gallon. For regular gas!

The two airport-adjacent stations have haggled with the city’s code enforcement board, pleading their case (which we’d love for them to reproduce, but neither station’s management would comment) in January to no avail. The stations then sued the city, and a hearing was set for June 30. Circuit Judge Jose Rodriguez didn’t issue a ruling that day, but thankfully, there was a stand-in for headlines on the issue: performance artist Brian Feldman, who posted Sun Gas’ prices on a sign roped around his neck as he stood in front of the station for six hours. “This is a true guerrilla performance,” Feldman said, arguing that his presence was art, not protest, because he was “only the stand-in for the non-existent gas price sign.”

The bastard numbers are visible on the pump, however, so we wonder what prevents consumers from whipping out of the station with middle finger erect Matthew-Bartlett-style. Laziness? Try relativity. “Hertz was going to charge me, like, $9.57 per gallon to fill this thing up,” said Jay Buchanan, a 20-something from Boulder, Colo., standing at a Suncoast pump. Inside, one of the cashiers remarked to Happytown™, rhetorically: “You go to Disney and pay $4 for a Coke, and you don’t complain.” Oh yes we do!Slurp.

Back at Sun Gas, another employee complained of customers “taking out their frustrations on the little guy,” before he was reminded by his manager of corporate communications policy.

In other gas-related news, the lefties over at Organize Now! recently clued us in to a report entitled “How Speculation is Affecting Gasoline Prices Today” by Robert Pollin and James Heintz at the Political Economy Research Institute in Amherst, Mass. The authors suggest that without rich guys in suits (or likelier, pajamas) trading holographic oil over the Internet, the average price at the pump in May would have been 83 cents cheaper. “[Each] family spent $82 more in May than necessary for gasoline, and most of this $82 will have made its way into the pockets of large-scale speculators in the oil commodities futures market,” the authors write. God Bless America!