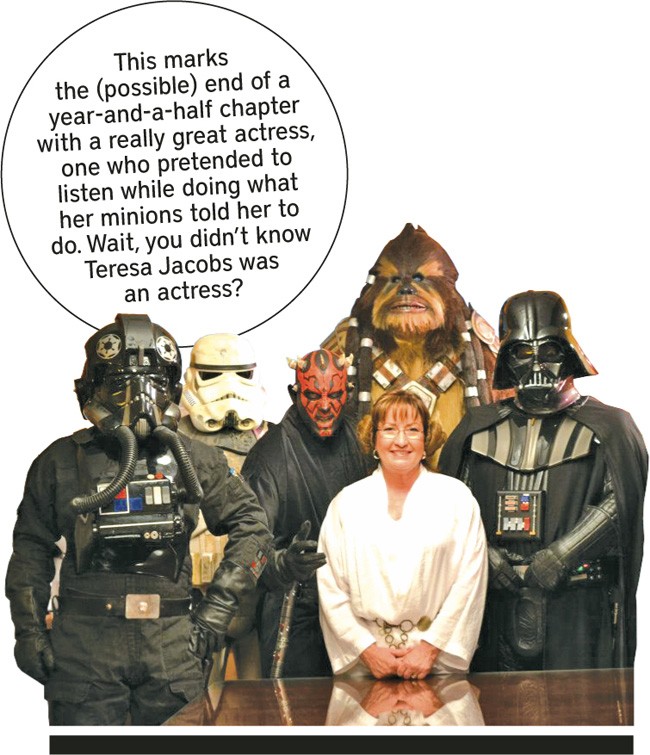 OK, it's official: We are sick of writing about this. We shouldn't have to explain to Orange County Mayor Teresa Jacobs (or anyone at all) why domestic partnership – or gay marriage, for that matter – is an essential right, a civil right and just fucking right.We'd like to say a personal “I hate you, too” to the 53 percent of Floridians that are still against gay marriage, according to a recent report by Florida Center for Investigative Reporting (also, we kinda wanna make out with President Barack Obama for “evolving”on the issue).

On May 9, Jacobs finally released her version of Orlando's already kinda tepid Domestic Partnership Registry, naming it the Health, Education and Life Protection (HELP!)ordinance, which hardly codifies same-sex couples because it doesn't even mention them. When we cornered Miss Republican Jacobs on the issue back in January, her position dilated with her pupils to make it clear that this shouldn't even be a gay issue at all: even though it's been gay advocates pressuring her on it, spending their time meeting with her on it, doing all of the legal research for her, pissing in her wind. But the cruel slap here is that the county is putting this up for hearing on May 22 (just in time for GayDays!) in an effort to make it look like it is a pink olive branch.That, dear readers, it is not.

“The HELP ordinance will provide rights to all residents in the county,” Jacobs said in a May 10 press release. “This creates a vehicle for widows, widowers, seniors and friends to designate a support person to stand by them in times of need and speak for them when they can't speak for themselves. We believe this will be the most comprehensive and inclusive ordinance in the nation.”

Hello, friend! Though Jacobs claims that the move “effectively expands the city's registry across the entire county,” that's not really the case. In fact, among the other complaints critics leading the crusade for a mere pittance of respect for gay couples have, there are these: The county ordinance negates the recognition of LGBT folks as families and basically removes the term “domestic partners” and makes them into amorphous “support/designating persons”; it's quite possible that this little lexicon-laceration might require a designating person – who may be dead, mind– to provide information on their support person on-site; it sucks and it's confusing to provide different rights from city to county; Jacobs yanked her promise for enforceability by legal means only accessible to the county (the county promised its registry would have stricter remedy provisions than the city's, as does its human rights ordinance); the clarification of the term – or lack thereof – “domestic partner” means that any other benefits offered to domestic partners are not recognized in the county ordinance. This is exactly what Teresa Jacobs started out with while canoodling with neocon John Stemberger (or his cohorts, like John Dowless, who used to lead the Christian Coalition of Florida and now consults with Jacobs), and this is exactly what Jacobs shat out last week.

“Orlando's ordinance is limited to people who cohabitate and share financial and emotional ties,” the press release boasts. “Orange County's HELP ordinance allows everyone else to register.” Yeah, because everyone else can fucking get married.

Anyway, this marks the (possible) end of a year-and-a-half chapter with a really great actress, one who pretended to listen while doing what her minions told her to do. Wait, you didn't know Teresa Jacobs was an actress? Well, she did just do a walk-on as the farmer's wife during the song “Iowa Stubborn” in the Garden Theatre's production of The Music Man on May 12, which is hilarious because Iowa allows gay marriage. We didn't go because the “Wells Fargo Wagon” skipped our office, but we're sure it was great. Also, thanks to the glory of the county's Facebook site, we now can see that Jacobs is a ringer for Carrie Fisher as Princess Leia in Star Wars. Jacobs posed for a photo-op with other characters for an upcoming nerd convention, and even put the buns on the sides of her head! This is leadership. Please, Teresa. Surrender the pink.

From one fairness soapbox to another: The city may take on an awesome new ordinance to ensure paid sick-time for employeesworking within city limits if the folks at Organize Now get their way. For weeks, members of the activist organization have been meeting with city leaders to argue their pretty unquestionable case. A core group, Citizens for a Greater Orlando (yesonorlando questionone.com) was launched on May 16.

Consider this: Orlando's fiberglass economy is built on underpaid table-waiting jobsand retail hell, and in many cases, especially in this economy, those people working those jobs are vulnerable to losing them if they get sick or need to take care of a sick loved one, including a domestic partner. Yay!

It's not a new idea, really. San Franciscopassed America's first paid sick leave ordinance in 2007, and according to a study released earlier this year by the Institute for Women's Policy Research, the results have been, well, pretty fantastic. Surveying 727 employers and 1,194 employees, the organization found that two-thirds of employerssupported the measure and went on record saying that they did not lose any money over it. Also, employees who are granted sick days are less likely to use them all.

So far, Organize Now executive director Stephanie Porta says the group has had supportive meetings with Mayor Buddy Dyer and Commissioners Sam Ings and Tony Ortiz (everybody else must be on the phone or something). But, according to Porta, convincing the elected officials is not as important as convincing the public and local businesses. The goal is to get 15 percent of Orlando's population (about 18,000 people) to sign a petition and move it past the standard “ordinance” rubric. She says they also intend to sit down and have “sane” conversations with potential opposition like the Orlando Regional Chamber of Commerce, because facts are facts.

“We're trying to make Orlando a better place and we think we can get there through talking honestly,” she says. Imagine that!