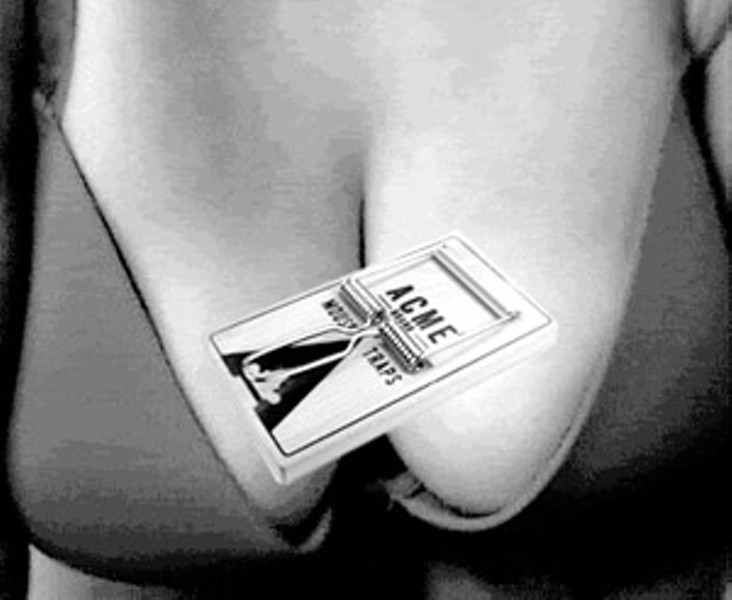 Last week we copped a feel on the Winter Park Police Department's unhealthy obsession with the silicone bust of Club Harem (see "The booby trap," Oct. 22). For eight months in 2008, undercover vice cop Carlos Calderon (aka "Luis Lopez") frequented the Winter Park mammary emporium in search of drug dealings, which he allegedly found, albeit in small amounts. Of course, coke and weed weren't the only vices peppering Calderon's assumed identity of cornrows and tattoos. He made himself a lady friend while drinking on the job and, just like they would in a bad episode of Law & Order, the facts of that flirtation are coming back to haunt him, via defendant (and accused dealer) Shawn Dawson's defense attorney, Mark Blechman.

As we went to press with the story last week, Blechman was just receiving the evidence that circuit judge Bob Wattles had ordered prosecutors to produce for the case, namely prepaid cell-phone records, MySpace records and some explanation of just how much cash the cops threw into this investigation of the obvious (because if you can't find drugs at a strip club, then you can't find drugs — FACT). While we can't vouch for the phone history (we haven't seen that yet), nor would we want to vouch for Calderon's MySpace page ("Very Lucky," his fake name, cites Fight Club as his favorite movie and "anything that involves fighting" as his favorite television show), our interest was piqued by the expense reports. We pulled out our vice abacus — it's made of Ben Wa balls! — and got down to finding out just how much tax money spent on booze and tips it takes to nab a dime bag. Actually, a lot!

According to records obtained by Happytown™, between Jan. 4 and Aug. 14, 2008, the Winter Park Police Department funneled a total of $5,500 into Club Harem, mainly through Calderon. Of that, $503 reportedly went into the joint investigation with state alcohol authorities, $4,120 made its way into the G-strings of dancers and the tip cans of bartenders, and informants ate up another $700, although what that got them is anybody's guess. Ultimately, according to the expense reports provided, the authorities were able to procure about $680 worth of actual drugs — marijuana, coke and Ecstasy — spread out over 11 visits to the club. There are expense reports for 32 dates during the eight-month period; some days apparently required multiple visits, therefore multiple reports, most with no drugs on them.

If it seems like a pretty lousy return on investment — especially when you include the undocumented man-hours of various Winter Park police officers with a starting salary of $38,559 per year — that's because it is. You could do so much better! That job should be yours.

The rhetoric was getting pretty dense in D.C. last week as the long-awaited Matthew Shepard and James Byrd Jr. Hate Crimes Prevention Act inched its way toward congressional passage and the president's desk on the back of a Department of Defense budget bill. Internally terrorized, wingnut psycho Anthony "Tony" Perkins attempted to mobilize his Family Research Council minions at the last minute into a theater of hate.

"Expanding hate crimes puts America in lock step with the stated agenda of homosexual activists," frothed Perkins in a newsletter, "who will turn next to the so-called Employment Non-discrimination Act, followed by the repeal of the ban on homosexuality in the military and then the Defense of Marriage Act."

Perkins called this "preferential" treatment to the gays, and then turned around to mock their notions of "tolerance" with what he claimed was a voice-mail message left for FRC vice president Tom McClusky threatening his life and his family while calling him a "redneck piece of s**t."

"And he's not alone," continued Perkins. "We get reports almost daily from donors who have given to pro-marriage campaigns in the states and are being awakened in the night by harassing phone calls and death threats."

The difference here, Tony, is that the hate crimes act — which passed the Senate Oct. 22 by a vote of 68-29 and now awaits the president's signature — simply adds gays to the list of minorities that the federal government will assist in prosecution for acts of actual violence. You know, violence like that which was perpetrated on Shepard and Byrd, among countless others.

Coincidentally, the murder trial against William David Brown Jr., who was one of two men suspected of killing Polk County 25-year-old gay man Ryan Skipper in 2007 (see "What's hate got to do with it?," May 31, 2007) began on Oct. 26. Ryan's family issued a public statement, which was later read as the opening statement in the trial, on Oct. 22.

"Losing Ryan has forever changed our family and brought a heartache that we hoped no other family would know," they said. "However, the tragedy is that this hate crime was not an isolated incident! Anti-gay hatred, once directed at Ryan, has not left our society. Now is the time and this is the reason, we must all stand together in supporting equality, dignity and respect for all people." Amen.

We'd be remiss if we didn't mention Marvel congressional superhero Alan Grayson — he's on the cover! — and his now comical "battle" for re-election next year against a growing pool of Republican almost-rans. Following a bizarre back-and-forth with the Sentinel, the party's great white hope, former State Sen. Dan Webster, pulled out of contention "after much prayer and thoughtful consideration," he said in a statement.

So who does that leave?

At the front of the "who's that?" pack is last year's failed primary challenger to Ric Keller, flat-topped man-of-God-and-radio Todd Long. Long was eviscerated by Keller in a mailer that dug up some legal troubles, specifically a 1998 DUI arrest and a 2005 drunk-and-disorderly trespass. He later recanted as a born-again Christian, as is standard practice around here, but the damage was done. Now Long's adding delusion to his résumé.

"I've got a warrior's spirit in me," he told Fox 35 News Oct. 20, adding that Grayson has been anything but constructive in "saying Republicans are evil `and` they want people who are sick to die."

But Long may face an even greater challenge in Grayson than he did with the bottle. As a personal injury attorney, he's unlikely to gel with the "tort reform" pleas of the anti-health-care right. To do so would swallow up his livelihood.

Grayson, whose ego shows no sign of diminishing in the media spotlight, remains unfazed. "It doesn't matter who I beat," he told Fox.

Speaking of that scary dude on our cover, it seems printing masks of local notables is suddenly all the rage in this town. (We've been doing it for years — just sayin'.) This Halloween, instead of hanging a spud between their legs and going to the party as a "dictator," the cheap and clueless can print themselves up a mask of their favorite Sentinel columnist! Think of the howls of laughter when you show up as everyone's favorite egomaniacal film maven, Roger Moore. (Just be prepared to answer the question, "And you're who now?" over and over and over all night long.)

The masks are available on the Sentinel's website. With so many ink-stained wretches to choose from, the Happytown™ staff is in a bit of a quandary. Do we go as talent-less Magic flack Mike Bianchi? Dreamboat pol-watcher Scott Maxwell? Business hottie Beth Kassab? Grouchy old fart Mike Thomas? Some guy named George Diaz, who apparently does something over there? It's so hard to decide.