Has Orlando's most in-your-face activist has finally gone too far for his handlers?

"They claim I'm too much of a troublemaker," says Crossley. "I don't follow directions as I should."

Crossley — who also hosts a radio show and organized a local Copwatch chapter — claims the state organization actually hired an investigator to follow him around. When they caught him wearing an ACLU T-shirt at a City Hall rally for striking cabbies, a non-ACLU event, they pounced.

"I freely admit my sin," says Crossley, who notes he wore the shirt that day because it was in his clean laundry pile. "I'm not real sorry about it."

The Central Florida Chapter is fresh off a precedent-setting win over the city regarding Orlando's public-feeding ordinance, but they are still in hot water. Crossley says the state organization will meet Dec. 6 in Naples to decide the local chapter's fate.

"The ACLU, the premier organization that defends the inalienable rights of people that are guaranteed in the Constitution of the United States, has one standard for their members and another for everyone else," the NLOA's press release quips.

The state ACLU gave us this chilling quote regarding the whole imbroglio: "The State Board has attempted to resolve problems with the Central Florida Chapter Board for the last several years. At its quarterly meeting this Saturday, the State Board of Directors will consider whether to intervene in the administration of the Central Chapter Board." 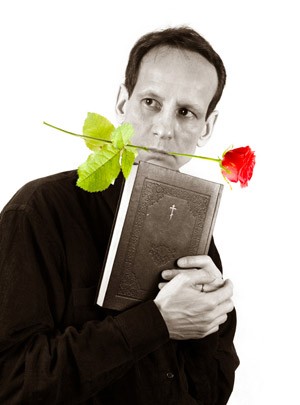 If you had doubts as to whether or not Orlando is the unsexiest city in America, let us lay them to rest with the following sentence: Five downtown Orlando churches will host "Dancing With the Pastors" Feb. 20.

Now, if you are anything like us, you watch ABC's Dancing With the Stars for the lithe bodies in form-fitting outfits. Who really gives a rat's ass about dancing? The appeal of the show is sex, as anyone but a prude can see.

Of course, when you have a bunch of pastors prancing about, sex appeal is pretty much right out the window. All that's left is dancing. And do you really want to see a gaggle of pastors shaking their junk?

We should mention that the exercise is a benefit for the homeless in this city, of which there are many. Money raised will help fund a downtown drop-in center, something the city has been talking about forever. So it's a totally unsexy benefit for a totally worthy cause. If you find that sexy, you can get more information at www.dancingwiththepastors.com.

And speaking of pastors you wouldn't want to dance with, Mike Huckabee's coming to town!

Eleven months ago, ex-fatty Hucky shocked the world by winning the Republican Iowa caucuses, and for a minute or two everyone thought that the former Arkansas governor and Baptist preacher who annoyed us all with his folksy humor, his mediocre bass guitar-playing and his palling around with Chuck Norris might be president. That lasted for about a week.

Then reality set in and Huckabee became just another bobbing head in the sea of failed presidential aspirants. But he got his own show on Fox News, published a book and may be a presidential contender in 2012, though we refuse to ponder such things now.

In his new tome, Do the Right Thing: Inside the Movement That's Bringing Common Sense Back to America, Huckabee reportedly busts on everyone he thinks screwed him over during the campaign. Mitt Romney is a phony (duh). Fred Thompson was "disconnected" with people (double duh). And he goes after various Christian conservatives who had the temerity to endorse such heathens as Romney or Rudy Giuliani. He also warns the GOP against bedding down with ideological purists — including the Club for Growth — that oppose tax hikes anywhere, anytime.

Huck will be at the Barnes & Noble on East Colonial Drive Dec. 8 at noon. Maybe he'll stumble through some bass riffs just to show you kids that he's still got it.

Just in time for December's gauzy ruminations on immaculate conceptions comes this frightening message from Planned Parenthood: "The Bush Administration promised not to issue any new regulations after Nov. 1. But now it's poised to implement a rule that could allow individual health care providers to redefine abortion to include the most common forms of birth control — and then refuse to provide these basic services." Well, pass the eggnog, then!

Lame-duck maneuvers — referred to poetically as "midnight regulations" — are nothing new; both Presidents Clinton and Carter issued thousands of pages of afterthoughts. It's the thought of somebody as clueless as Shrub doing it that just kills us.

Among the 20 or so rule changes reported in the New York Times Nov. 29 are plans to make it easier to construct power plants near national parks and a regulation to extend health-care workers' right to refuse to give out information or contraception to patients.

Bush has until Dec. 20 to put through his proposed regulations, and should he do so, the Obama administration will have to jump through hoops to repeal them. Some nightmares never end.

This week in gay: boycott! On Dec. 10, www.daywithoutagay.org is encouraging peaceful resistance from America's working queers by asking them to "call in ‘gay'" to work! It's a decidedly youthful reaction to the recent deluge of hateful legislation: California's Prop 8, Florida's Amendment 2 and Florida attorney general Bill McCollum's toothy promise to appeal the decision to allow gay adoption. The idea is that Middle America might wake up and realize that many of the people lubricating their daily paths -— doctors, lawyers, real estate agents, dancing pastors — are queer, and they warrant the same rights as everyone else.

The Facebook event page had already registered nearly 132,000 confirmed guests as of Dec. 1, meaning the economic effects could be measurable. Participants are encouraged to use the term "gay" instead of "sick" when calling in, to emphasize their point, and then shake their little asses down to the nonprofit of their choice and volunteer.

As for equating the term "gay" with "sick," the organizers have this covered hilariously in their FAQ: "Whoa! NO! It's just that ‘gay' rhymes with ‘day' so it was a cute and clever way to get you involved. HAHA! Now you're hooked! You're beautiful, very not sick, and super wonderful. Help us spread service however you feel comfortable, SWEET THING!"

Straights are allowed to call in gay too.