It's no secret that Orange County Sheriff Kevin Beary dislikes strip clubs; his department is a big part of the Metropolitan Bureau of Investigation, an agency that spends a lot of its time undercover trying to bust titty bars for any infraction they can make stick.

But the latest allegations of chicanery even took us by surprise. They came in a Jan. 19 letter from Steve Mason – an attorney for Cleo's, a strip club on Orange Blossom Trail – to Beary; and they're truly bizarre.

In the wee hours of Jan. 18 – a Tuesday/Wednesday, one of the club's busiest nights – Orange County Sheriff's deputies showed up, declared a bomb threat and ordered the club evacuated. Then nothing happened.

"Cleo's management waited for the bomb squad to arrive," the letter says. "Not only did the bomb squad not appear, no fire trucks, detection dogs, or the like were brought in. In fact, no one from your department entered the property or inspected the business to conduct even a cursory search for a bomb."

Forty minutes later, deputies declared the bomb threat over and gave the all-clear for patrons to return. Of course, by this time all the patrons were gone.

About the same time, Mason writes, Orange County deputies showed up at Cabaret Internationale South, another strip club owned by Cleo's owner Gerald Uranick, and said there had been a bomb threat there, too. The Cabaret managers, however, refused to clear the building, Mason writes. Again there were no bomb trucks, detection dogs or anything else to indicate that the sheriff's office was worried about an actual bomb.

We called the sheriff's office to ask them about the threats. A spokesman said someone would get back to us, but no one ever did. Weird.

If you get the e-newsletter sent out by Ocoee Mayor Scott Vandergrift (and who doesn't?), then you might have noticed the recent inclusion of some less-than-flattering photos of his wife, Beth, post hip-replacement surgery.

"I tried to get the doctor to take the camera into surgery, but my wife would have killed me," Vandergrift tells Happytown™.

The mayor says he included the link because so many people asked about his wife's recovery, which is sweet and all, but may we offer a suggestion? How about next time you just write that the surgery went well and she's recovering nicely?

The slide show features photos of Beth conked out with tubes stuck up her nose, a four-inch scar on her hip and her vital signs monitor (she has pretty good blood pressure: 131 over 78). Vandergrift says he didn't do it to embarrass his wife; he just wanted to do something "cute" for her. 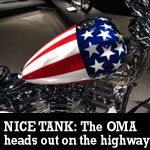 Best thing about "Kick it up," the Jan. 21 opening gala for the Art of the Motorcycle show at the Orlando Museum of Art: the food, even if we were disappointed that we couldn't take a bite out of the 400-pound chocolate Indian motorcycle; and checking out an exact replica of the "Captain America" chopper from Easy Rider (the original was stolen before the film came out).

OK, that's two best things, but it was a rockin' party.

Worst thing: Seeing people who should have stopped wearing tight leather 20 years ago dancing to an Elvis impersonator.

God knows we here at Happytown™ aren't perfect. Why, just the other week we made a huge mistake. Can't remember what it was at the moment, but take it from us, it was damned embarrassing and we had to apologize profusely to somebody.

But our shame is trivial compared to that Manning Pynn, the Orlando Sentinel's ombudsman, must have felt last week when he had to correct a story he'd written … about corrections.

It's a hoary daily-newspaper tradition to run an annual piece about how many corrections were in the paper that year. In 2005, there were 779 corrections – a record – in the Sentinel, Pynn wrote Jan. 15. He began his lamentation on the proliferation of inaccuracies with an anecdote: "The Sentinel explained on Page A2 one day last March that an article about an Orlando mayoral election had misidentified the drinking establishment that candidate Kevin Mulvaney had owned. It was Mulvaney's, not Kate O'Brien's, Irish Pub."

"As you can see, this journalism stuff is complicated," Pynn huffed in the next paragraph. All fine and good, except that Mulvaney's first name is Ken, not Kevin. The paper corrected the mistake Jan. 21.

A few months after I joined the ranks of the LYNX riders, my girlfriend dumped me. Coincidence, or do women not respect a man who relies on public transportation?

Time to find out. To the ladies of greater Orlando: I'm looking for someone willing to go on a date with me with the LYNX bus as our only mode of transportation. I want to see if it's possible to find love on the LYNX bus, or if any self-respecting woman out there will chance an evening with a guy who needs this city's bus system to get around.

Interested? E-mail me at lynxrider@orlandoweekly.com. Leave all the essentials: likes, dislikes (no walks on the beach, that ain't happening), etc. A picture would be lovely.

A little bit about me: I like music, movies, drinking, reading and going for long, moonlit walks to the nearest bus station. I dislike most New York Yankee fans, reggaeton and smelly people in general. So there you go.