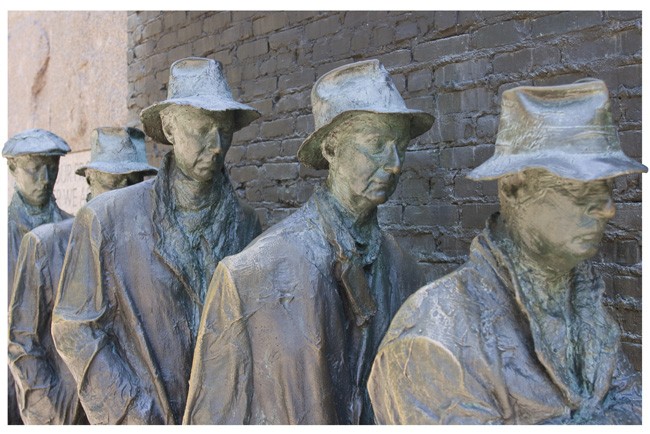 It was the thrill of victory and the agony of three feet last week as master-in-miniature, Florida Senate President Mike Haridopolos, ate crow when his beloved plan to privatize 27 state prisons (leaving 3,500 corrections jobs up in the air) died an unseemly, bipartisan death on Feb. 15. How the hell did that happen? Well, Haridopolos had already been publicly cringing about the whole private dancing affair – one that he and his “analysts” had been projecting would save the state $16.5 million – muzzling any senator who dared to decry the plan based on the livelihoods of their respective communities, public safety and accountability, because sometimes running a prison isn’t quite as situationally comedic as running a bawdy hotelin rural 1970s England. Fortunately, 10 Republicans rained on Haridopolos’ foppish parade, sending speculation flying that Gov. Rick Scott would find a(nother) clever way around representative democracy to get his way. As for Haridopolos, he threatened, as usual, to take more cash from health care and education.

“This is what bold ideas are about,” he told the Sunshine State News. “While I was knocking on doors, no one was telling me that we should spend more money on prisons, or that it’s our obligation to keep everyone in the state employ.In fact, it’s the opposite. Our goal is to move forward and try to create a better overall private sector environment so that more jobs can be created.”

But, in the wind-up world of leg-islative lockstep, timing – or, rather, juxtaposition – is everything. Turns out that some of those attempts to “create a better overall private sector environment” are worse than you could possibly conjure in your own dark alchemy basement or temporary sweatshop. On Feb. 15, the Florida House passed HB 7087 doubling the state’s corporate income tax exemption from $25,000 to $50,000 (following last year’s leap from just $5,000), meaning that 3,500 fewer businesses – or a total of 11,500 – would be on the hook for the corporate tax. Though the bill is draped around the notion that this will somehow catalyze a booming manufacturing future for Florida – there are further exemptions for machinery, turbines, electricity and gas – the real sticking point comes in the caveat that in order for a business to qualify for the tax breaks, that business must swear on its dusty old ledger that it does not employ union members. Class war!

“This bill does nothing to sweeten the potsof working families in this state,” Florida Rep. Mark Pafford, D-West Palm Beach, told the Florida Current.

Oh, and what about those working families? Well, if they’re working in Florida, odds are they’re working for pennies in the hospitality industry, right? That sucks, because on Feb. 16, the Senate’s Commerce and Tourism Committee voted to move forward with SB 2106, a bill that would lower the base pay of tipped workers – bartenders, servers, everyone else in Florida– from Florida’s current minimum of $4.65 an hour to the federal minimum of $2.13 an hour, so long as an employer could “guarantee” that those employees would still make $9.98 an hour with tips included.

Now, if you’re one for conspiracy theories – we are! – you might say that this is a blatant bit of lobbying cruelty by the restaurant industry. If you’re even more inclined to dig deeper, you could see it as part of the evil American Legislative Exchange Council’s agenda to eliminate the minimum wage altogether. Also, the world is going crazy.

According to a report by the National Employment Law Project on the matter, the facts don’t support the enactment of this new bill. The National Restaurant Association’s own projections show that the industry is already growing disproportionately to the economy, and restaurant giants like Orlando’s own Darden Restaurants – the ninth largest employer of low-wage workers, according to NELP – is enjoying higher profits than it did before the recession, even as tipped workers have three times the poverty rate of the general workforce. So why target the poor?

“I think it’s a blatant attack on workers in the state,” says Organize Now’s Stephanie Porta. She adds that legislators needn’t worry too much about backlash from the electorate because the poor, coincidentally, are the very same marginalized victims of the state’s current voter suppression tactics. It’s a perfect storm! Likewise, there isn’t even a House component for the bill this year, meaning it’s probably more a testing of the public relations temperature than anything else.

“I think it’s a test to figure out their language and their messaging,” Porta says. “They can do their polling, do their working groups, and next year when it comes back up, they’ll have their own PR campaign.”

Outback Steakhouse: You can literally live out back if you work here.

You know who isn’t poor enough to worry about any of this? Our dear, be-wigged friends of the Holy Land Experience and Trinity Broadcasting Network, Paul and Jan Crouch. Last week, the demure duo of questionable bedroom morality were indirectly slapped with a federal lawsuit by their own granddaughter and ancillary chief financial officer, Brittany Koper, according to the Orange County Register. The suit alleges that two attorneys working for the couple, through its not-at-all-shady business apparatus, somehow managed to embezzle – or unlawfully distribute – $50 million to the directors of TBN, which includes the Crouches, thereby allowing the purchase of more giant pink unicorns and tasteful crucifixion towel racks for one or all of their humble abodes.

“Observers have often wondered how the Crouches can afford multiple mansions on both coasts, a $50 million jet and chauffeurs,” Koper’s attorney told the Register. “And finally, with the CFO coming forward, we have answers to those questions.”

Koper actually served as CFO for TBN affiliate the Trinity Christian Center in Santa Ana, Calif., an organization that paid no taxes on its 2010 revenues of $175.6 million and net assets of $827.6 millionbecause of its nonprofit status. Paul Crouch served as an officer for the Trinity Christian Center, raking in $400,000 in 2010. Koper was apparently told to shut up and return everything she made from the company when she brought up her misgivings to TBN’s attorneys. Nothing to see here, then!

“Her assertions are outright fiction and wholly without merit,” one of the targeted attorneys, Douglass Davert told the Register. “These allegations are defamatory and to the extent they get printed we are going to defend ourselves vigorously.”

As opposed to “vigorously” laughing all the way to the bank, we assume. Amen.