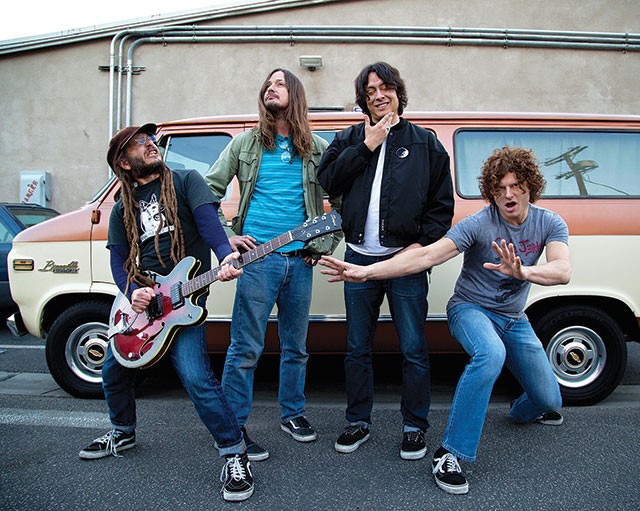 A punk pit in the Florida summer is maybe the only thing sweatier than the orgy referenced on Circle Jerks’ 1980 debut, Group Sex, but when Circle Jerks (and now Off!) singer, Keith Morris, remembers an early Florida show with his influential hardcore punk band, he isn’t recalling our state’s blistering heat, but our ball-busting cops who invaded his stage that night. One intruding officer walked right up to the mic and cautioned Morris: Stop the profanity or they’d stop the show. Morris laughs now, likening it to a ludicrous scene that could’ve been cut from a music mockumentary like This Is Spinal Tap. To someone whose volatile personality is nearly always turned up to 11, it’s one of many bumps on a blurry road of near-constant touring that drove the classic hardcore sound the veteran’s new band Off! upholds today.

His most recent stop in Florida wasn’t pleasant, either. Off!’s flight got delayed on a layover here following their South American tour, and Morris says the airline wouldn’t let anyone off the plane, a stuffy environment that damaged his lungs due to air-conditioning blasting over the heavy breathing of fellow passengers. The timing was shit, as he was on his way to record their 2014 release, Wasted Years, and his infected lungs definitely complicated the process for Morris, who turns 59 next month, two years past the 57-year mark he’s sung over and over that he didn’t want to hit in the Circle Jerks song “Live Fast, Die Young.”

To create the kind of energy an Off! record requires, it has to be recorded live. Since all the band members have major projects of their own (all defining bands like Redd Kross, Rocket From the Crypt, Burning Brides and Hot Snakes), not to mention being devoted dads, finding two weeks to get together is challenging. Throw into the mix a hoarse-throated singer who is more inclined to shout, “What the fuck is your fucking problem?” than coddle each recording comment like, “Do you think you could maybe play that a little faster?” and it’s a marvel the 24-minute, 17-song scather got cut at all.

“When you’re working with musicians of that caliber, you don’t really give them direction,” Morris says. “You don’t tell them what to play. You just let it go.” But Morris regrets not pushing a little harder in the studio, and he definitely regrets the timing of his poor health, which made him ashamed to curse the others when he knew he wasn’t performing at his best either.

Still, Wasted Years – which is not, as many fans accused the band on Facebook, an allusion in any way to the Iron Maiden song of the same name (Morris is more into Judas Priest than Iron Maiden, guys) – was met with positive reviews, making Morris perhaps his own worst critic. The album art by Raymond Pettibon depicts the album’s actual namesake, the despicable kind of dudes that Morris’ memory dredges up from his youth, the kind who lazed through life and inspired him not to do the same.

Now Off! is touring with a different music legend: grungy Melvins drummer Dale Crover. Although Crover and Morris do not have a long-established friendship, Morris says he didn’t even have to wave money at Crover to get him onboard, calling him an incredible human being whose talent allows his pounding presence to morph from an elephant or a rhinoceros with Melvins to become more like an eagle or a cheetah with Off!

Morris hearkens back to a show at the Roxy in Hollywood, California, where he bumped into a music critic who had never heard of Melvins and who planned to leave after MC5 guitarist Wayne Kramer’s opening set. He was adamant the critic stay for at least two songs, but it only took one to convince him to plant his feet through Melvins’ storm and later thank Morris profusely.

Having outlived the fast life, Morris may have slowed down (overcoming alcohol and cocaine habits), but Off!’s music stands as the last bastion of that rapid lifestyle, as furious as its dreaded frontman.