There’s no dousing the fire at this South OBT hothouse 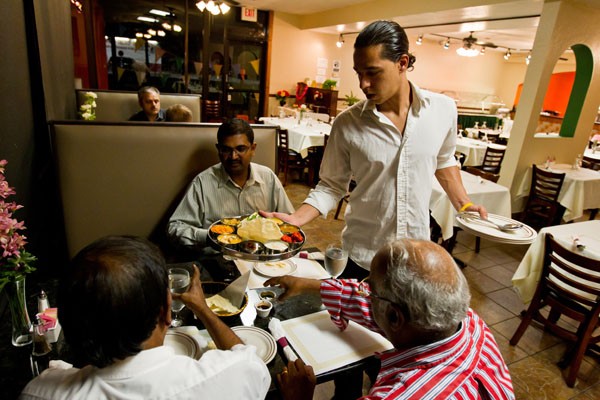 There may not be a more fragrant, or infernal, cuisine than the dishes native to the Chettinad region of Tamil Nadu. South Indian cuisine is aromatic and gut-blazing by nature, but those kooky culinarians from Chennai to Karaikudi just thought kicking up the capsaicin quotient a few more Scoville units would distinguish their dishes from their neighbors. And it worked. Another distinguishing factor: Unlike typical South Indian fare, Chettinad dishes aren’t entirely vegetarian. While beef and pork are nonexistent, chicken and mutton (a rare find in restaurants here) are as common as lentils and potatoes.

With the addition of India Kitchen, the Curry Corridor on South Orange Blossom Trail just got a whole lot more redolent. The Tijuana Flats and Taquitos Jalisco that previously occupied the space didn’t bring enough heat, I guess – a trick, as you’ve undoubtedly guessed by now, not missed by the good folks who run India Kitchen. In fact, pretty much everything we sampled was spicy – even dishes that were requested “mild” had a good amount of tikka. We deliberately shied away from traditional South Indian dishes found on menus at Udipi Café, Woodlands and Bombay Café, with one exception – peppery rasam soup ($3). I don’t know what it’s like to wash one’s tongue in a bowl of fire, but slurping this scarlet-hued, sweat-inducing starter has to come pretty bloody close. It wasn’t until after multiple wipes of my face, neck, chest and head that I was able to take a bite out of my namesake snack – the kara vadai ($5). The lentil fritters were heavy, gritty and a little dry (not unlike myself), but these spiced hockey pucks lacked the proper crunch to make them fully enjoyable.

Chettinadu chicken kurma ($12), one of many meaty mains, comes flavored with seasonings including clove, cardamom, nutmeg, peppercorn and ground chilies. The coconut- based sauce acts as a thick suspension for bone-in chunks of chicken lolling in a fragrant and truly inspired curry. A heaping plate of Madurai egg kothu paratha (here spelled “parotta”; $9) featured a dry sauté of minced flatbread, eggs and mutton bits griddled in a cast-iron skillet. Ordering it “spicy” re-moistened the aforementioned regions of my upper half, but an order of creamy salty lassi ($3) proved propitiating. Fiery mutton biryani ($13), a rice dish we ordered “mild,” out-aroma-ed the other mains. Most notable were the fatty chunks of the mature sheep, but if you take home some leftovers, you’ll enjoy the blast of saffron, cinnamon and bay leaves the following day. Naan is nowhere to be seen on the menu, so we opted for the chappati ($4), a too-dry flatbread that had us wishing we ordered the paratha or poori ($3) instead.

A too-thick skin on doughy gulab jamun ($4) and a semolina-based rava kesari ($5) that resembled gummy, sugary grits didn’t exactly end our meal on a high note, but the dishes we had devoured set the twilight reeling nonetheless. We emerged, weary and punch-drunk from the sensory wallops thrown by the restaurant’s culinary heavyweights, wobbling proudly to our corners of the parking lot and heeding the words, “If you can’t stand the heat, get out of this kitchen.”